This week we begrudgingly packed up the boys and went to a necessary appointment for new orthotics for both boys. Malachi wears something called Ankle-foot-orthotics (AFOs) on both feet to keep his feet from folding up due to his cerebral palsy. With his CP his brain is telling his ankle ligaments to pull tighter than they should and the ligaments blindly obey the brain.

His current AFOs were getting tight on the ankle bone and starting to rub pressure sores on his little ankles. It was about time anyway for him to get molded for a new set so we made the appointment.

Levi’s cerebral palsy also manifests in his ankles, but in the complete opposite way. Malachi’s ligaments pull too tight, but Levi’s brain is telling his ankle ligaments to relax making his ankles loose and floppy. We noticed that he is developing some pretty intense callouses on the insides of both feet. We talked with his doctors about orthotics to help keep his ankles and feet in the position they are supposed to be in and they wrote a prescription to be fitted for them. Levi won’t have AFOs that go tall like Malachi’s, but instead his will look more like a shoe insert that extends just above the ankle.

You can really see that loose ankle issue in this photo: 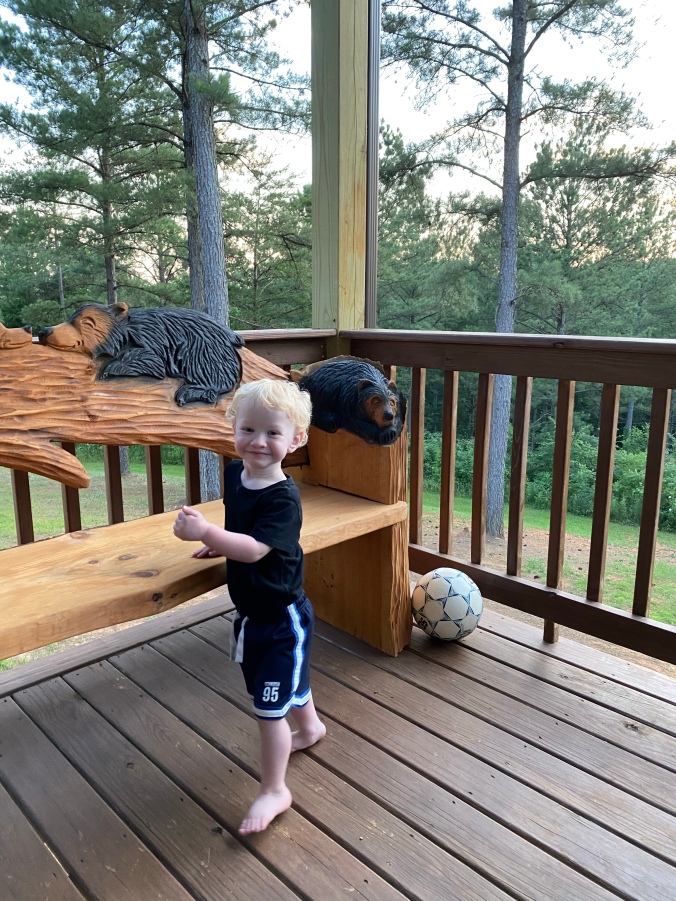 It will take a few weeks to get them custom made and then we will go back in to make sure they fit right. Malachi was super excited about picking the theme that will be printed on them, but with our new orthotics company the options were very limited. We went with a fun base color and we will be adding some vinyl superhero stickers to make them just to his liking. He is oddly picky about which superheroes make the cut so we will see what kind of hodge podge mix we end up with! Seeing him have strong opinions on things brings me so much joy.

Levi immediately kicked into medical PTSD mode when we entered the office and started crying. We were able to calm him down pretty quickly with some medical gloves and silly music on mommy’s phone. I was very thankful to have Jake’s extra hands to help with this appointment.

Jake and I coach soccer in our small town and our open fields have started for the season. We are being extra cautious with these, splitting the girls into small groups and keeping our distance from them as much as possible. My mom has been helping watch the boys during practices, but the weather has been so beautiful we brought them out to play in the grass for one of them. The fresh air and different environment was a welcomed change. 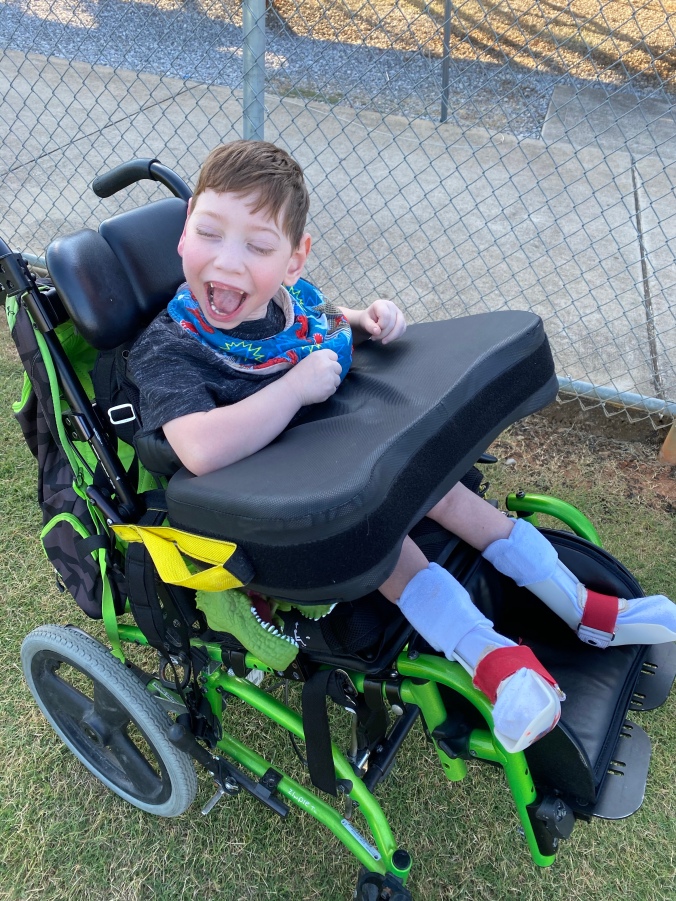 Malachi has been on an antibiotic to “reset” the bacteria build up in his tummy. We were trying to find a way to relieve the tummy pain he has been having and it seemed to help a bit. But during that time on the med we did not swim in the pool (I will let you use your imagination as to why on that one). They were both thrilled this week when they got to take a dip again! 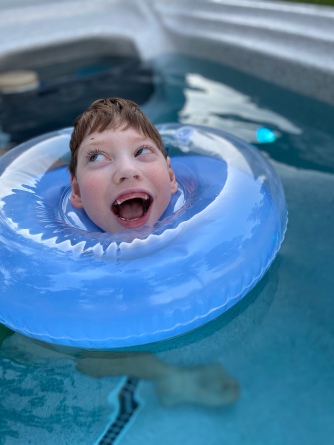 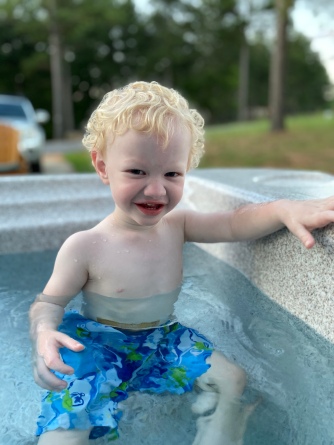 We are working on getting a covered pavilion over the pool, but for now we are limited to dusk swims when Malachi can tolerate the sunlight in his eyes. The only problem with that is that the bears have been making their appearances earlier and earlier now that the blackberry bushes that cover our property are in full swing. We have had at least 5 bears make their way down our road (that we or our neighbors have laid eyes on) just this week. So our dusk swimming adventures are not as relaxing with momma on high alert!

Levi has been keeping us on our toes like always. He is heading into a frequent tantrums phase, which is mentally exhausting. We try to keep him as preoccupied and busy as possible and give him lots of chores to do. 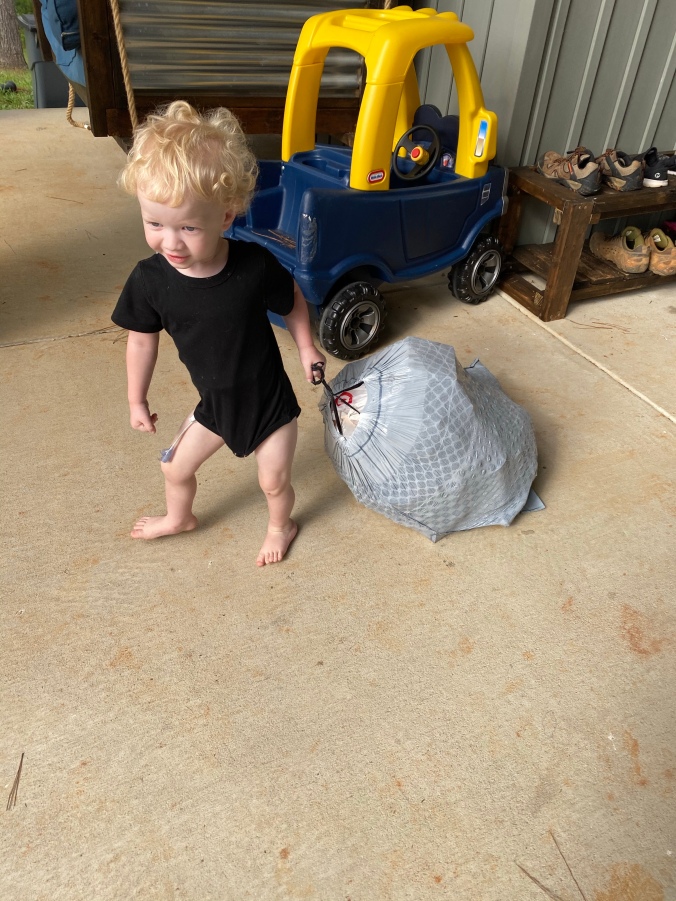 And we are continuing to work on his food consumption. He is trying a lot of foods but still unable to swallow them. With this bowl of cheerios he crunched them up then took them out of his mouth and wiped them on a napkin. We really have to let him call the shots on what he will actually swallow. With his vocal cords paralyzed open he is not able to protect his airway. So if a food makes him nervous, it makes us nervous too!

We just continue practicing, believing that one day those cords will start moving again.

I have been trying to organize the piles of things that accumulate, one of which being the medicine syringes. Every special needs mom has their favorite type and clings to them like gold! Good syringes that don’t fade the numbers over time are hard to come by.

As I purged the stash of ones that aren’t legible anymore I started doing the math on how many we go through in one week between the two boys. The end result is 98. And cleaning them is a bear. 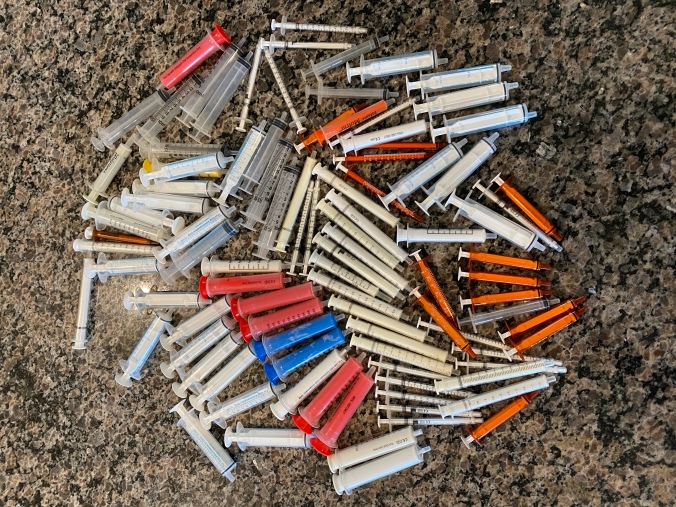 We received such a sweet and touching gift this week from a blog reader in Korea! She explained that she had taken some art classes and wanted to draw a picture of Malachi for us.

What a precious gift for our family! And how perfectly does it capture our Malachi- spiderman shoes and all! I showed it to Levi and asked him who it was a picture of and he immediately responded “Chi Chi”.

But the picture is treasured for several reasons…

Through it I am reminded of the mysterious ways of God.

God has taken the testimony of a 7 year old boy who can’t walk or talk and used him to reach someone in Korea. That isn’t something I could ever do- it is an undeniable God thing.

But it also has reminded me that hope in Christ is contagious. This photo represents the Malachi my mind sees. I see the typical boy that is trapped in his broken body.

I had convinced myself that I was the only one who saw him that way….that could look past his “cant’s” and see him as whole. But a complete stranger in Korea sees him through my same hope filled lens. If there is one other person that sees my Malachi as whole then surely there are others.

When I was in the NICU in Cincinnati with Levi I connected with a family and meeting them rocked my world. I remember the initial conversation I had with the mom, as I was pretty thick in the middle of a pity party for myself over our situation.

I asked her about her hospitalized child and she began to tell me about her unique and amazing family. She explained that she had 17 kids (WOWZAH) and that the majority of them had been adopted internationally and were considered special needs, mostly for physical reasons.

The daughter in the hospital at that time was named Madison. I had the opportunity to meet the whole gang, including Madison, and I can tell you that meeting this family had a profound impact on my heart. Madison had been put on an “un-adoptable list” due to her medical complexities but God opened the right doors and Madison’s story is unforgettable.

Recently an adoption blog did a write-up on this amazing girl and I would love for you to read about her and see her transformation. I am guessing it will touch your heart as much as it did mine: http://blog.madisonadoption.org/2020/05/27/madisons-story/?fbclid=IwAR1o2satxYZCpMNClC3uWUVeSxGfRxu3MGVm7NHw-p7iR3exVdk0VRhX-5Q

In our family, the challenges we face were thrust upon us. We rely on our faith to carry us through and we often feel like our heads are barely above water. But to see a family pursue the challenges again and again and again…what a example of the love of Christ. What a life changing love these children might not have ever known had this couple not pursued the challenged and uncomfortable life.

May we all continue to see others through the eyes of Christ instead of assigning our own values.

And may God continue to call my family towards the challenged life so that we may develop the eyes and heart of Christ.