Just for fun, let’s start out with a silly Malachi video…

Malachi and mommy spent the majority of the week in Ohio and finally made it back to Tennessee late Thursday evening. While Malachi enjoyed the adventure, he definitely had a wave of homesickness hit on Wednesday. It was actually pretty heartwarming and sad at the same time…

Malachi does not sleep well, and he very rarely naps. It just so happened on Wednesday afternoon that he slipped off into a deep sleep. He slept for nearly 45 minutes! His cousins (whom he dearly loves) walked in and he woke up to their happy little voices and was so excited. He laughed and giggled as they ran around him but after a few minutes he looked very solemn and softly said: “Dad?” Of course, Jake was still in Tennessee and it had been three days since he had seen his dad.

His sadness turned into a full fledged melt down after a few minutes. Big crocodile tears ran down his face and he just continued to yell “Daddddd, Dadddddyyyy” over and over again. I called Jake on speakerphone to see if hearing his voice would help, but he was inconsolable.

It took me a good bit of time to get him calmed down. I am guessing maybe when his cousins walked in, he just assumed the whole family was coming? I am not so sure, but either way it was one of the sweetest and saddest things to see. Malachi loves his dad so much.

As we drove home Thursday I kept telling Malachi that we were headed to see his dad. His anticipation was so exciting, and every time we got out along the drive he would yell for his daddy.

When we finally did arrive in the driveway, Jake got him out of his car seat and Malachi gave him the tightest squeeze he could muster. They stayed up together until almost midnight, and then Malachi got up again at 3am to make sure dad was still there.

We came home to some pretty awesome notes from some new and old friends! So much kindness has been extended to our family in the last several weeks. We are blessed beyond what we could ever imagine. 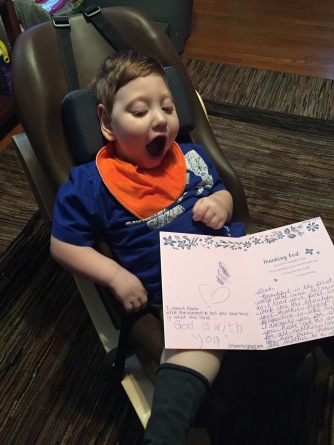 Overall, the week was a great one and Malachi handled it like a champ. It did, however, test my patience in many ways. Malachi is a 24 hour kid. You can never take your eyes off of him for medical reasons and having those small breaks from Jake during a normal day are vital to my sanity.

Malachi can run on about 5-6 hours of pieced together sleep. Mommy cannot. So when daddy isn’t there to take shifts, Elmo and the iPad are crucial. This week I tried letting Malachi listen to his cartoons and get a few extra minutes of sleep, but as you can see in this video that wasn’t about to happen 🙂

The Elmo video also had another side effect that I didn’t think of…it attracted all of the other young children in the house! Before I knew it I had been overtaken by toddlers and sleep was no more. This is a video of Malachi and my half-brother Kaliber. He and Malachi are good buddies, as you can see in the video.

As those moments creeped up throughout our week I found myself thinking about Paul and the thorn in his side. Now let me stop right here and make sure you understand…I would NEVER consider Malachi a thorn in my side! The reference is to my lack of patience with Malachi, NOT Malachi himself.

Patience is something that I never struggled with prior to having Malachi. But it is now one of the most crucial elements of my day, and I find myself running on an empty tank more than I would like.

In 2 Corinthians 12, Paul is telling us about this thorn in his flesh. He never identifies it, but lots of people has speculated about the different things it could be. He tells us that he asked God three times to remove it, and what was God’s reply?

“My grace is sufficient for you, for my power is made perfect in weakness.”

I cannot imagine living this life and going through these challenges without knowing Christ. Our journey is fueled by hope and faith that God’s plan for Malachi is SO BIG and we have only been able to see a glimpse of the things He has in store for him.

So this week, if you find that thorn in your flesh…that thing that you hate but cannot fix yourself, I want to encourage you to take it to God. Allow His power to be great in your weakness.

We are on another adventure this week, but now that we have so many followers from all over the world, I am being a little more cautious about giving details until after the fact. We have had just enough “over friendly” messages to make me hesitate on posting too many details!

On that note, Malachi’s story has continued to spread this week! We will be sitting down with some people at corporate Chick-Fil-A in a about a week and half for a video interview with us and the Chick-Fil-A mom. I will be sure to link the video when it gets posted. It is still amazing how such a simple act of kindness has touched so many hearts.

Malachi was even on the 700 Club this week! Here is a snapshot of his TV debut taken by a friend: 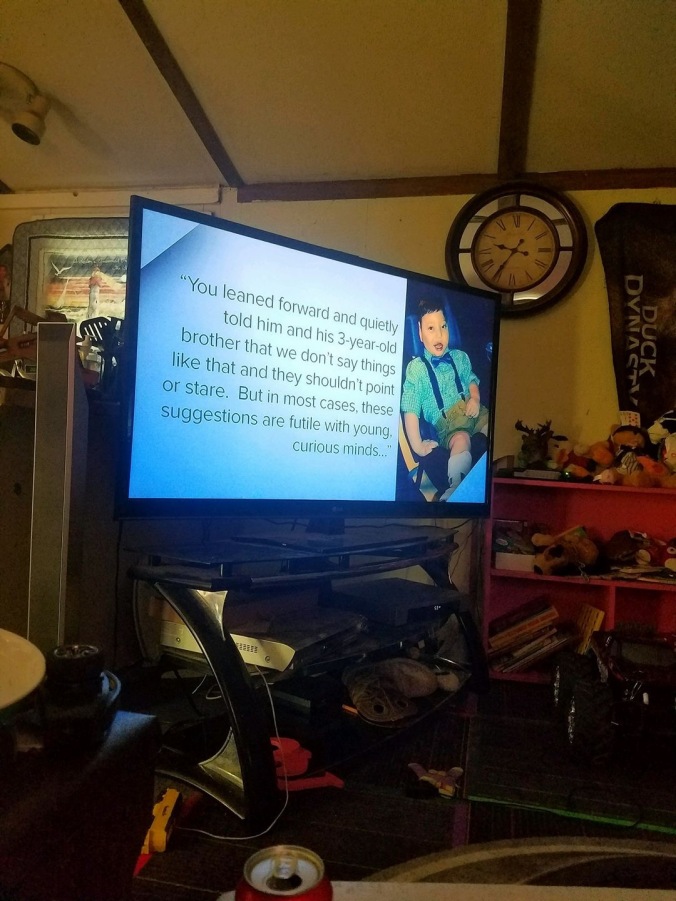 Please pray for Malachi this week as we get back into our routine of therapies and appointments. Please also pray for our family member who needs a healing touch, and for some unspoken needs.

And one final shoutout to the sweet couple at the Kentucky Cracker Barrel that held Malachi while I quickly ate my dinner! Traveling with him alone was a challenge, but it was much easier with kind strangers there to help.

We love you all!