Another week full of smiles and fun! 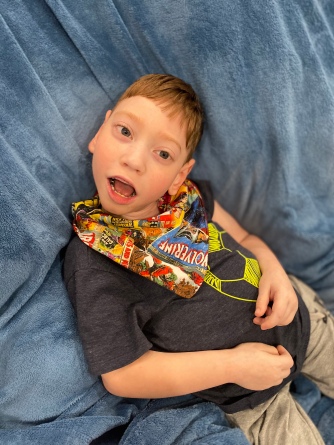 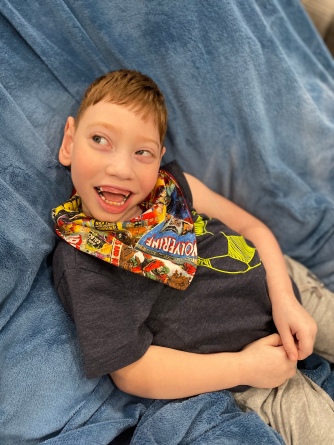 This week we attempted our first post quarantine specialist appointment. Jake had to be at the house to meet a repairman, so I went solo with the boys. Needless to say it turned into quite the adventure!

I pulled into the parking lot with enough time to get all the gear and boys unloaded, but when I got the wheelchair out things started to go south. The chair had not been used in so long that it had gotten stuck in the 90 degree position and wouldn’t recline. I can’t even put Malachi in the chair at that upright position so I fought desperately with the chair trying to get it to budge. To get it to recline you have to squeeze each of the handles at the same time and slowly tilt it back. Since it wasn’t moving, I was squeezing the two handles and shaking it like a wet rag to no avail which created a quite hilarious scene for some nearby construction workers. I was sore the next day from shaking that wheelchair with all my mommy might.

There was no physical way to get both the boys up the elevator and into the office safely without the chair so I continued to fight, feeling the panic creep up in me as the minutes ticked by. Then after 10 long minutes finally BOOM it came loose! I grabbed Malachi and plopped him into the chair, then grabbed Levi only to find that he had peed through his pull-up, pants, onesie, and car seat. He was dripping with pee so I grabbed a towel, spare clothing, a new diaper and wipes and raced into the building.

When I got to the door it was locked and there was a sign with a number to call; that number led to an automated message that prompted you to push buttons to try to speak with someone. While I was three minutes into my phone call with the automated man, they called me and told me that the doctor was leaving because we were now officially 15 minutes late.

Long story short, the doctor waited and was very kind in spite of my lateness. The nurses let me know they were a little miffed, and grew even more irritated when I wouldn’t put a mask on the boys. With their respiratory issues I am afraid they can’t exchange CO2 like they need to.

As soon as we entered the exam room Levi’s medical PTSD kicked into high gear and he had a complete meltdown. I tried all the tricks in the book but none of them would calm him down. Malachi didn’t like that Levi was crying so he just got plain angry and answered NO to all of the questions the doctor asked me about him.

I was able to bribe Levi with gloves if he would stand on the scale. 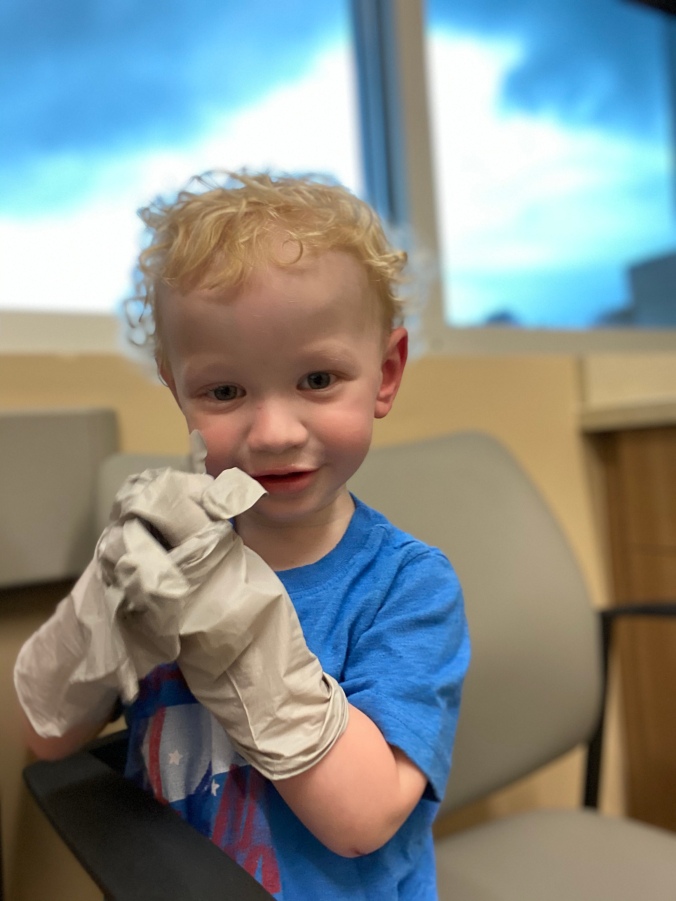 We went through the appointment and as we packed up to leave I heard it…the sound of a torrential downpour. I looked out the window and the rain was flooding the parking lot…a special needs wheelchair momma’s worst nightmare.

At this point I was in it to win it so I pep talked the boys (and myself) and told them they were about to take a shower. I found a small awning semi-close to the car where I could park Malachi while I loaded up Levi and off we went.

I was drenched within seconds and a sweet doctor who was driving by jumped out and handed me his umbrella and told me to keep it. The gesture was truly sweet but I needed both hands to wrestle Levi into his seat and carry Malachi safely. The doctor was still in his car watching and I didn’t want him to feel like his kind gesture was unappreciated so I tried tucking the umbrella under my chin and running with Malachi flopping over my shoulder. Oh goodness you can imagine what that must have looked like haha!

It was one of those moments where you just have to laugh. The boys were both wild eyed with excitement and I was soaked completely through. It was a big, sloppy welcome back to reality gift from the special needs mommy world, as if to say “Let the games begin!

Aside from the obvious chaos of that day, we had a great week with the kids. Malachi’s seizures have continued to ramp up randomly but overall better than last week.

Both of the boys did excellent in their physical therapy sessions on horseback. It has been really helpful for Malachi specifically to help improve his posture that has worsened during this break. I don’t know if you have been able to spot these negative changes in the photos I post, but below is an example of the weakness I am talking about.

When he is on horseback he is required to hold his head up high which strengthens those muscles.

Levi has been his goofy self, spending as much time outside as we will allow him to. 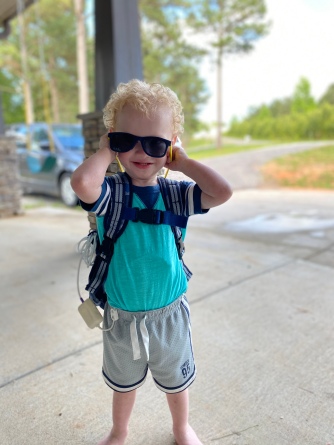 We are trying to get him used to wearing a helmet for his horseback sessions, but he isn’t a fan quite yet. We can’t comfortably get a helmet on Malachi due to his shunt and microcephaly but Levi has no reason to not wear one while on the horse.

I have typed five different devotionals and erased each one. My heart and mind are in so many places right now! I never go into writing the blog actually knowing that I am going to write about. Instead I pray that God writes this part for me, typing the words that someone needs to hear. I have caught myself tonight trying to steer it a direction instead of giving it to God so let me try again…

After 112 long days we walked out the doors of the ICU and loaded our little 6 pound 4 month old into the back seat of our car. I didn’t take my eyes off of him the entire ride home.

We brought him into our home and I still couldn’t take my eyes off of him.

It was 3am and I still couldn’t bring myself to take my eyes off of him, even though they were so heavy with exhaustion. I had convinced myself that if I closed my eyes something bad would happen to him. He still had fresh incisions from his brain surgery and I could see the many scars telling his story all over his tiny body.

We were home but his body was still so broken and fragile. Both hips were dislocated, his femur was broken, and his feet were turned unnaturally upwards against his shins. We weren’t able to feed him like a typical baby because of his severe reflux and vomiting. Fear of the unknown gripped me in an inexplicable way.

To be completely honest, I still have that very same issue some nights. As I stare at his warped frame, or watch his eyes flicker deep within his seizure I allow fear to creep back into my soul. I start to mourn over things that haven’t even happened yet. My imagination begins to create scenarios and outcomes that feed those fears until they become irrational and overshadow the truths I know about God and His plans to prosper me and not to harm me.

That first night home with Malachi I distinctly remember calling out to God and asking Him for wisdom in raising this boy. I asked Him to replace my fears with His wisdom and clarity of thinking. And in that moment he exchanged my spirit of fear for an inexplicable peace that could only come from Him.

Sometimes we try to convince ourselves that fear is an emotion that comes hand in hand with the role of motherhood and give it a position in our thoughts. But we have to see fear for what it truly is…a subtle but calculated attack from the devil. Your heart is not able to serve two masters, and when we choose to take on a spirit of fear we are communicating to God a lack of trust in Him.

This week my goal is to make an intentional effort to take EVERY thought captive. And like that first night home with sweet Malachi, I will be praying to God for His wisdom and strength. And may He continue to cultivate that spirit of power, love, and self control in each of us.

May God bless each of you,

One thought on “Spirit of Fear”