I am not quite sure when a house officially becomes a home, but it is safe to say that ours has officially made the transition. I think this quarantine has had a lot to do with that. This is hands down the happiest our little family has ever been- and we didn’t even realize what we were missing out on until now! 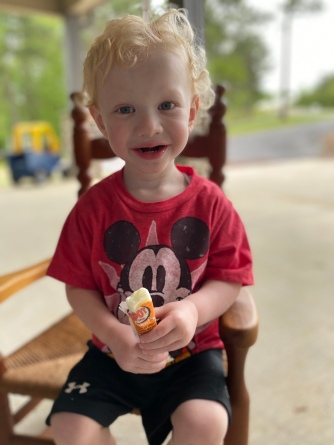 We decided to take a leap of faith and sell our log cabin back in 2016 with the goal of building Malachi a fully accessible home that could grow with him and his needs. By the time we moved into our house I was 7 months pregnant and Levi came just a few short weeks later. With his medical complications it was a long 5 months before I got to come back to the house and with the dozens of appointments between the two boys I don’t know that I ever fully got the chance to take a deep breath and enjoy being in such an accommodating environment. 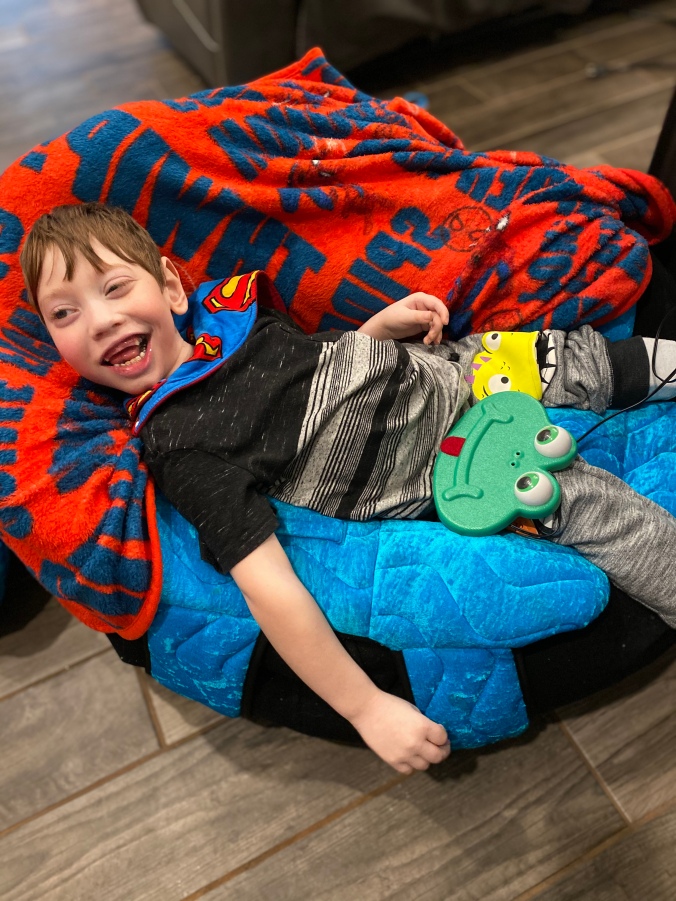 It is like I have fresh eyes as I look around at all the details of the house that have made life so much easier…things like the diaper chute, the laundry chute, and the wheelchair access. This week has left me thankful for so many things. Last night I put both of the boys in the wheel-in shower, but recently they have been bickering about who gets the water stream when we do dual showers with them. Levi cries when the water isn’t directly on him, and Malachi tries to hit Levi when he is hogging the stream. Last night though I remembered we have a dual shower head and I was able to get both of them spraying enough to keep everyone happy. When we made the plans I didn’t know I would one day have two bickering boys in that shower fighting over the water.

The boys are absolutely loving the simplicity of our days. If it is warm enough to swim we head out to the therapy pool around sunset. We figured out this week if we wait to swim until right before bed both of the boys sleep better. 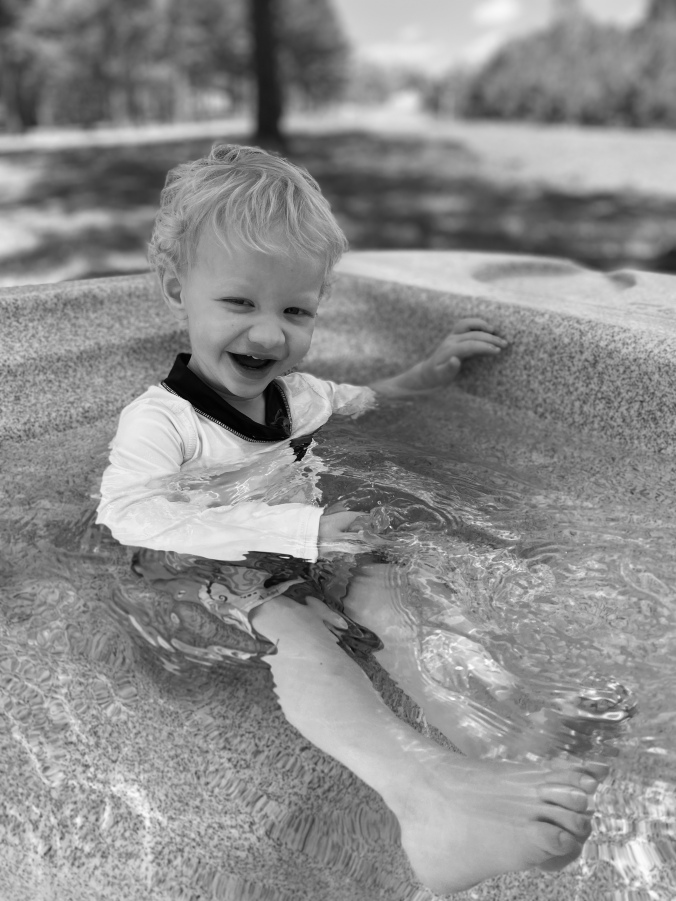 We also realized that Malachi enjoys swimming so much more at dusk when he can open his eyes all the way. He is legally blind but extremely sensitive to light, especially the sunshine. We plan on covering the pool eventually with a roof so he can swim comfortably but for now we will do sunset swims until the bears start to come out. They usually start showing up on the porch in mid April, but so far no sign of them at our house! Our friends down the road had a massive one show up this week so we are being extra cautious.

We are still doing nightly wagon rides, spending hours in Malachi’s tree house, and playing on the front porch digging in the rocks. We try to keep routines in feeding schedules and revolve most of our plans around medication times. 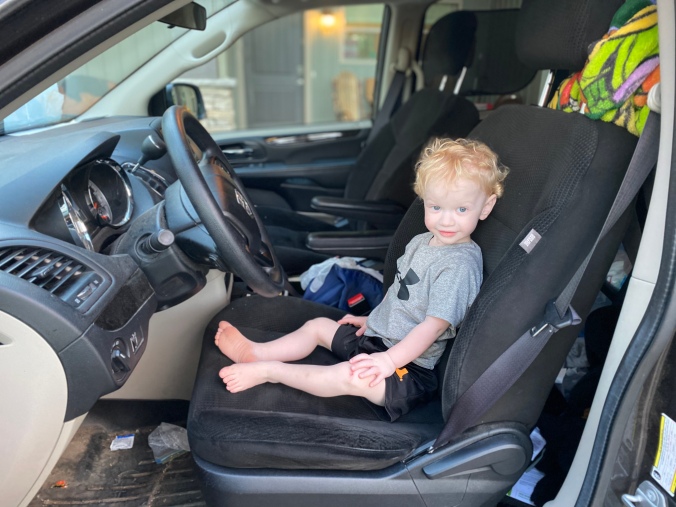 Jake and I do a lot of tag teaming throughout the day as we try to accomplish all of our work duties here from the house on limited internet. Jake has 3-5 zoom calls a week, I usually have 2-3 for the church, and the boys have at least 5 for therapies.

The boys have been cracking us up with their mischief. Levi is a imaginative little boy who can find a way to get to just about anything out of his reach. But they have such sweet and tender moments together that are so beautiful to watch. Levi has taken on several caretaker tasks for Malachi, like helping me medicate him and take off his shoes at the end of the day.

And boy, do they laugh together! Levi kisses Malachi on top of his head at least a dozen times a day. One day this week he had just polished off a bowl of Cheetos and when he kissed Malachi I said “Ewww now you got Cheetos in his hair!” They both started to squeal with laughter and Levi ran over to repeat the scene to make his brother giggle more. 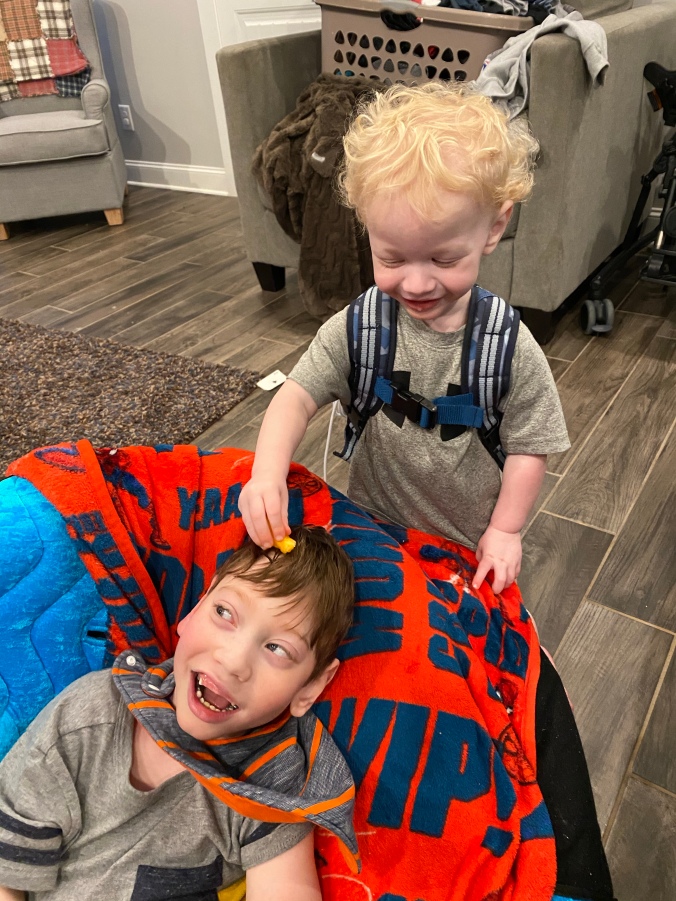 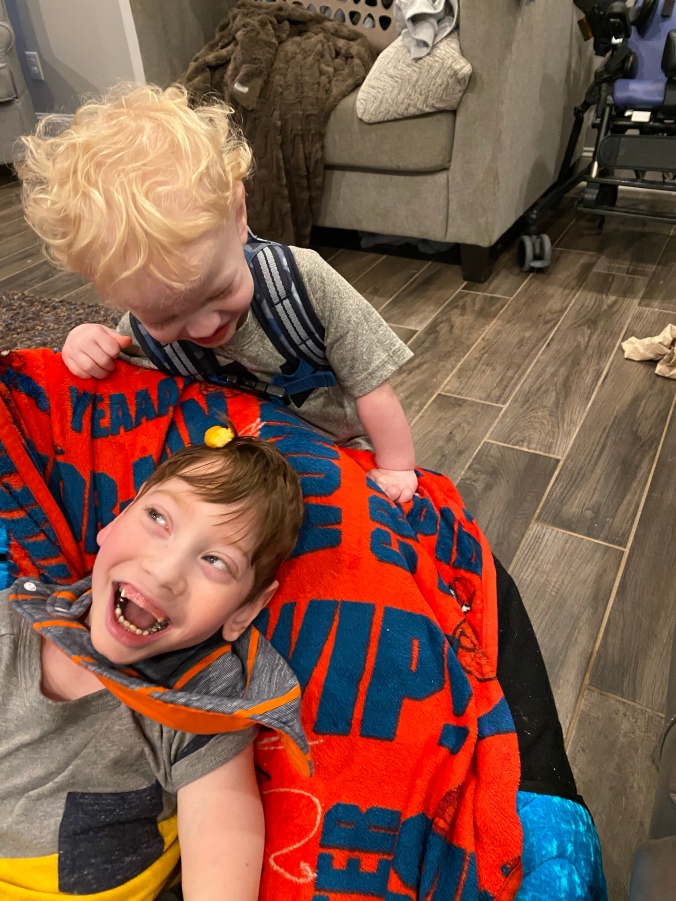 This week Facebook memories reminded me of some really happy times in our life and some really hard times. Memories are one of the hardest parts about being a special needs mother.

This week when I close my eyes I have these flashing images of Levi’s lifeless 4 pound body as a doctor stood over him, manually breathing for him. He had coded just shortly after we arrived on the air ambulance to Cincinnati. Watching his chest rise and fall is an image that I will likely never be able to forget.

But this week it has also popped up some pretty amazing photos of baby Malachi during his NICU stay. When I see those photos they automatically bring up emotions. While there were some pretty traumatic times in the NICU for both boys, April was a great month for baby Malachi. He had an eye surgery and his second brain surgery in the same week 7 years ago but when I see these photos they bring back such a joyful feeling in my heart.

This week as I looked into the eyes of that sweet boy I remember that hopeful feeling that brewed inside of me in those early days. I just felt so strongly in my heart that Malachi would defy the odds. I just KNEW that he would fully overcome his complications and be a completely normal and healthy little boy. I firmly believed that God would heal him.

When I look back at those photos now with the knowledge that I have about special needs and things to look for I see “it”. I see the things those nurses likely saw in my warrior boy.

This week I am thankful that God leads us one step at a time. I couldn’t have handled the full picture seven years ago. I am so thankful I don’t have the weight of foreknowledge on my shoulders. Seven years ago that hope that he would be typical fueled me.

But as God has led us step by step on this journey he has built the “muscles” He knew I would need to handle the reality of our life. He has re-built my broken heart in a beautiful way. He has refocused my eyes on where the value of life is found. He has redefined contentment and introduced me to His peace.

I am sure that each of you have those reflective moments in your own lives where you look back and thank God for keeping things hidden, whether good or bad, until the time was right.

Every night we read the boys a Bible story from the “Jesus Bible”. If you haven’t heard of it, this book walks kids through each of the stories in the Bible and ends each one with a reference to Christ’s love for us and death on the cross.

Tonight we read about Daniel and the lion’s den, one of Malachi’s favorites. Daniel is one of the most authentic characters in the Bible and has made an impact on my faith. In fact, Levi’s middle name is Daniel in honor of Jake’s father but also because of the power behind that character in the Bible.

I think about Daniel and his decisions throughout his life to continue in obedience to Christ despite the consequences. What if Daniel had a glimpse of being tossed into the lion’s den…would that have impacted his faith? Would a glimpse at me staring into the eyes of a 7 year old in the middle of a seizure have impacted my belief that he would be fully healed?

Like Daniel, sometimes the next chapter in our story needs to stay safely tucked away so we can practice growing those muscles of our faith. Our journey with God is a process and powerful faith doesn’t often come the moment we are saved. It is in these dark moments in our own lion’s dens that we have the chance to see those muscles in action.

So today I want you all to join me in being thankful for the things God chooses to keep hidden until the time is right. May our faith continue to grow mightily so when our time in the den comes we won’t bat an eye.

Please continue to pray for safety over my family as the country begins to slowly open back up. We will still be keeping the boys in for several more weeks but Jake and I will each have to make contact with the outside world and need prayers of protection and wisdom.

3 thoughts on “Our Time in the Den”