And I am happy to report that Levi tolerated the bow tie! And with his curly hair it gave him a very sophisticated Albert Einstein look.

In years past we have blazed through Easter without a second thought to the gimicky side of things, but on Thursday Malachi came home from school with a bag full of Easter eggs (dinosaur ones at that!) and he was so excited to open the eggs and find candy inside. He was so intentional with his movements to break each one open and was giddy with anticipation about what might be inside. I took a butter knife and shaved all of the candy into melt-able slices for him to snack on. I asked him if he wanted to share some chocolate with his brother and he was very quick to tell me no. He did sign that I could have some though, so we are making progress on our sharing.

Seeing his joy over the eggs reminded me that I need to do a better job at creating memories and experiences for Malachi. It is easy to assume that he won’t get into holidays if I don’t build them up but somehow he seems to know a whole lot about them. The only thing I can think of is that he gets the concepts from his cartoons.

So off to the store I went to build an Easter basket for each of the boys. They each got a book, bubbles, candy, and a special toy. Malachi couldn’t contain his excitement so I caught a quick video to share with you:

You all know our history with family photos- it rarely goes well. Today was no exception, but the laughter I experienced looking at each of these photos made it worth it. We even caught a few with Malachi’s “Hulk” tummy tube cover showing. 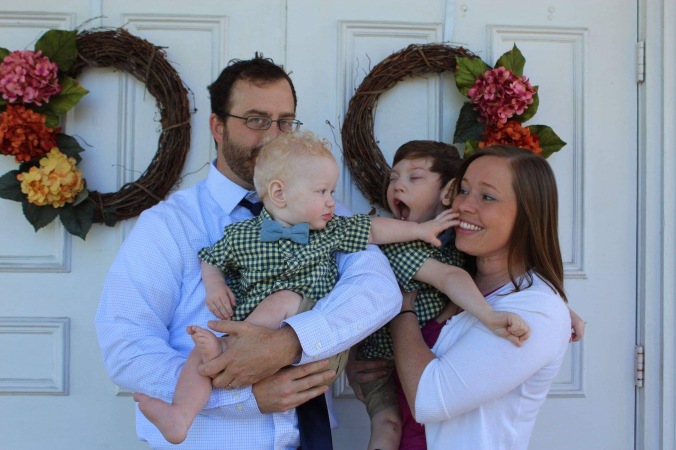 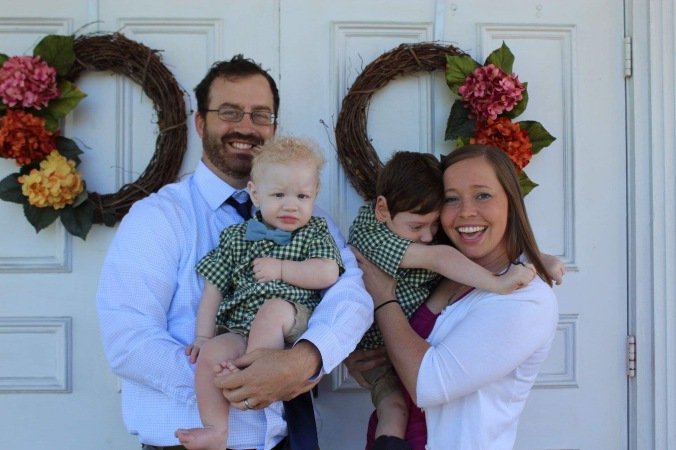 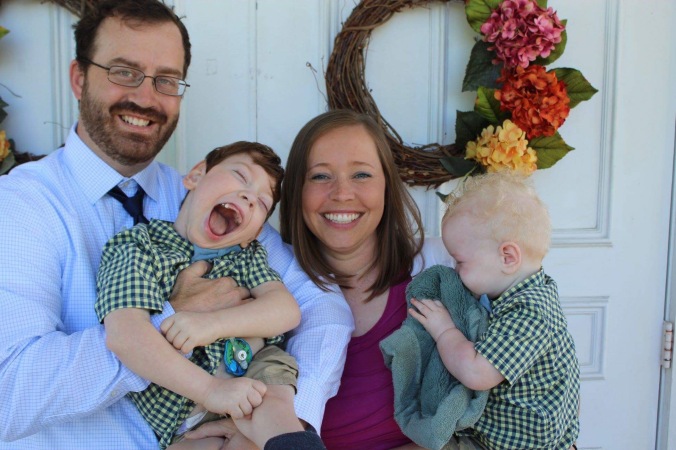 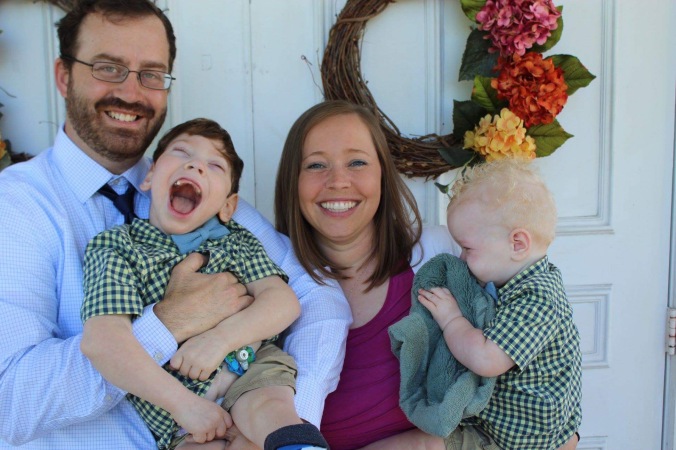 Tonight our church hosted a community outreach event and set up different egg hunts for different ages and abilities. Malachi and his other wheelchair buddies had an egg hunt with balloons taped to the eggs so he would be able to snag them easily from his chair. With Jake’s help he ended up with a handful of balloons and eggs.

He has been ecstatic about those silly balloons!

Levi also got in on the action getting a handful of eggs. I was busy getting the other hunts started so Levi’s best buddy from church offered to help.

As you can see, Levi is still doing great off of oxygen during the daytime. The oxygen concentrator that we have in our home is big, noisy, and spits out a lot of heat. Since it isn’t being used in the daytime I now flip it off during the day. One night this week I completely forgot to turn it back on and headed to bed. Levi was asleep and stayed at really high levels so I didn’t even realize the oxygen wasn’t on until he had a quick dip down to 92 (anything above 88 is still considered acceptable). We are seeing some huge improvements!

I am absolutely determined to get this kid wire free. This week I have been trying to come up with a plan to keep him from being hooked to his feed bag 18 hours a day. Step 1 has been increasing how much volume he gets pumped in him in an hour. I don’t want him to be miserable with something his tummy isn’t used to so this has been a slow process.

I have also been trying a few bolus feeds here and there. With a bolus feed you simply hook up a syringe and pour in some milk. Instead of a machine slowly sending it in over a few hours, gravity takes it into his tummy over the course of about a minute.

This carries risks for Levi; if I send in too much at once and he vomits there is a chance he can’t protect his airway (since his vocal cords don’t move) and it would go into his lungs. I have only been doing one hour worth of food (2 ounces of milk) at a time and ONLY when he has a completely empty tummy. So far he has tolerated it very well! We will keep fiddling this week and trying to make some progress.

Malachi has been having some gut issues and we aren’t quite sure what it may be. It has been going on for several weeks but with no other symptoms I have been hesitant to take him into the pediatrician’s office. I spoke with his GI doc this week and he had me bring some samples by for testing. I am hoping we get an easy answer.

And as if our week wasn’t crazy enough, the bears are apparently out of hibernation and stopped by for a visit on Tuesday night. They usually come by the house between 12am-4am but this one came by shortly after Jake got home from soccer one night around 10pm. I had cooked salmon for dinner and he must have caught a sniff of it in the wind. So back into high alert mode for the Carroll clan! We have some security cameras set up outside now so hopefully I will be able to get better pictures than last year.

Malachi and Levi have been two mischievous brothers this week and are learning how to tag team to accomplish things.

When we decided to go the gimicky route for Easter, I talked a lot with Malachi about the holiday and what it meant. I told him that lots of kids like to use their imaginations and pretend, just like he does when he pretends to be a superhero. And they pretend that their is a big, giant bunny that brings an Easter basket to their door and that’s a big reason of why they get excited about Easter.

I explained to Malachi that we know that the bunny is pretend, and instead we choose to celebrate how much Jesus loves us! I think he is a bit too young to understand the details and the “why” of Christ’s death so we just focused on the great love that Jesus has for Malachi.

Malachi is so eager to learn these days, so as I talked to him about all of this he listened very intently. I always wonder what questions swirl around in his beautiful little mind. I can’t wait to have conversations with him one day and hear his thoughts on things instead of guessing at them.

This morning as I processed the significance that this day brings, I found myself thinking about the day from the perspective of one of his disciples.

Christ hinted several times to them about how he was going to die and rise from the dead three days later. I want to give the disciples some credit here and tell you that Christ used words that confused them, but that is just not true. In fact, the words He spoke were very plain and simple:

“Now Jesus was going up to Jerusalem. On the way, he took the Twelve aside and said to them, 18 “We are going up to Jerusalem, and the Son of Man will be delivered over to the chief priests and the teachers of the law. They will condemn him to death 19 and will hand him over to the Gentiles to be mocked and flogged and crucified. On the third day he will be raised to life!” (Matthew 20:17-19)

These word must have fallen on deaf ears, because Christ’s death on the cross wrecked these men. Their hearts were mourning over the loss of their friend, their teacher, their Lord. They were so confused…wasn’t this man supposed to be THE ONE that changed everything?

As I read this scripture today and processed their emotions I realized how relatable the situation was to me in my spiritual life. How many times has God spoken to me with a promise, then something happens that didn’t lead to that outcome and I begin to question and doubt. I even begin to panic, much like the disciples did, instead of trusting that He would make good on that promise.

But here’s the thing….God always keeps His promises. Every single time. Without exception.

When Malachi was a few weeks old and fighting for his life in the NICU I remember vividly laying in the bed at the Ronald McDonald House and praying that God would restore Malachi’s brain and make it whole. God spoke so clearly that night and said “It has already been taken care of.”

The next day I strutted into the NICU with my head up high, knowing that they were about to witness the miracle that God had shared with me the night before. Malachi had a brain scan and the doctor came in to deliver the results. I was so confident and so sure. But the doctor explained that the brain damage was much worse than the previous scan and more of Malachi’s brain had died off.

There are two ways you can look at situations like these:

#1 Get frustrated that God didn’t keep His promises

#2 Recognize that the promise is still on it’s way

Part of faith is always believing in the promises. It is hearing about what is to come and believing with all of your heart- and not just believing it but waiting and watching for it.

Faith is expecting…even when the promise seems impossible. My faith tells me that Malachi’s healing has already been taken care of, but exists on a timeline that is hidden from my view.

Maybe this whole concept feels very unrelatable to you. Maybe you haven’t had a Ronald McDonald House Moment and heard God speak. And that is absolutely okay. For me, it is a rare occurrence and one that still absolutely fascinates me.

But God speaks through scripture! Have you read His words and looked for the promises in them? We can’t expect God to speak to us if we aren’t seeking.

My challenge for myself this week is to seek more of God and listen to the things He is pushing my heart and mind toward. To listen to his promises and strengthen my faith enough to fully believe that He will see it to completion.

And boy, am I thankful that He kept His promise to the disciples on that third day. What a glorious day that must have been.

God bless you this Easter,