On Monday we celebrated Malachi! He was giggling the second he woke up and clearly knew that is was his special day. I dug out his birthday shirt from last year and his favorite monster pants and he was ready to go! 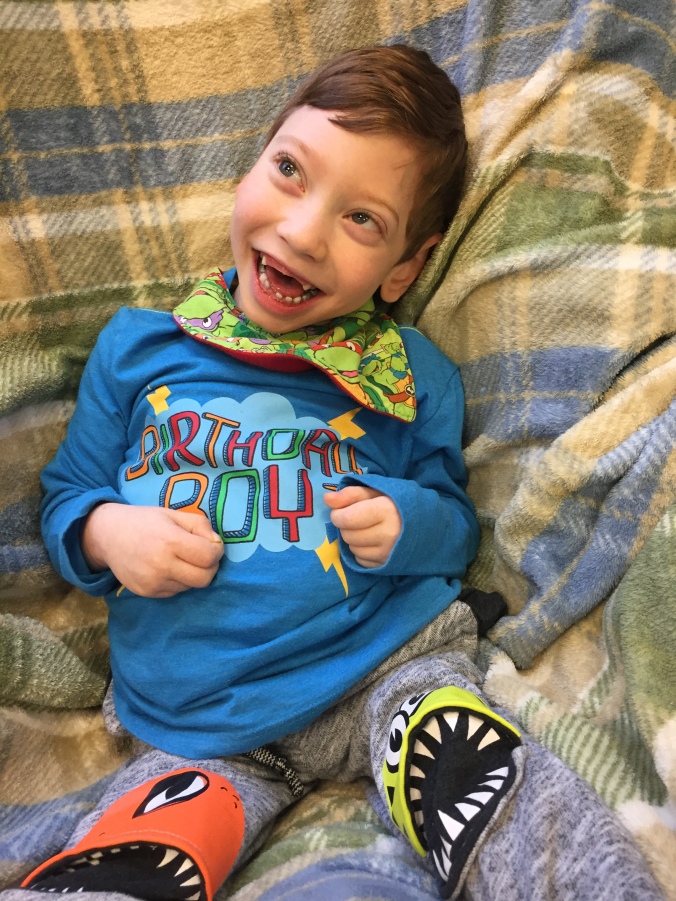 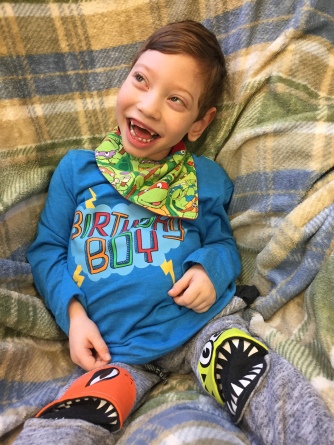 We had a jam packed Monday but I wanted to make sure we made it special for Malachi. After his physical therapy session we headed to the grocery store and I let Malachi pick out a giant balloon. Of course he chose Paw Patrol and giggled with anticipation as they inflated it for him. Levi is going through a phase where balloons scare him, which Malachi is very aware of and uses it to make him shriek and cry. We then went over to the bakery section and let him choose some cupcakes for us to share that night when Jake got home.

We put candles on his cupcake for the first time and turned the lights down so he could see them.

And then he flipped the entire cupcake over with his excitement. 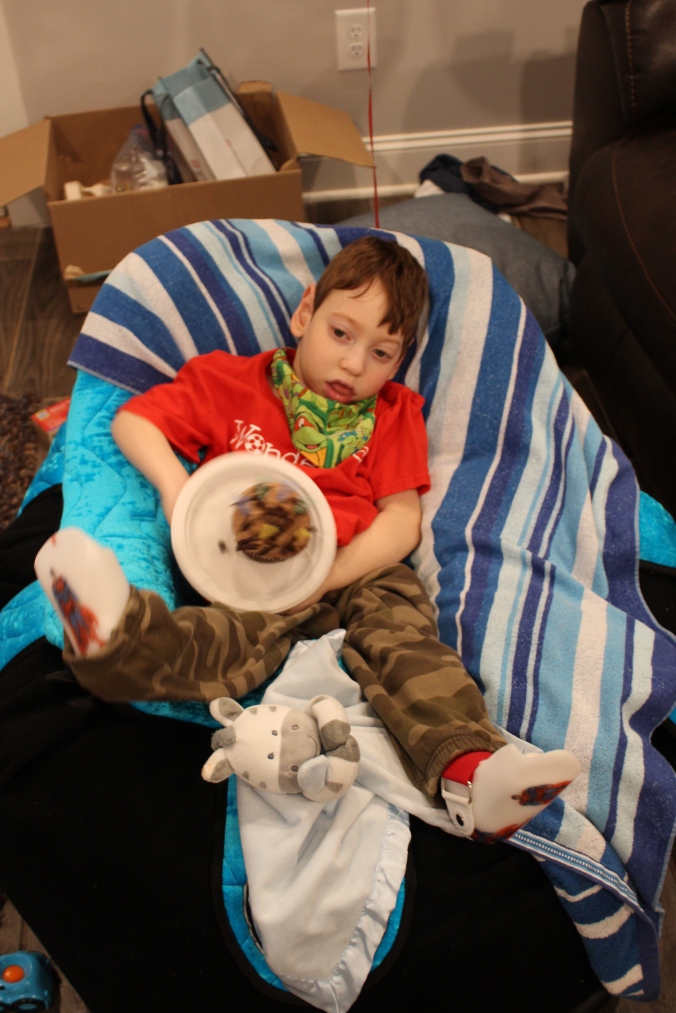 We had one big cupcake left over and I decided to save it for feeding therapy the next day as I knew it would motivate Malachi! The boy’s feeding therapist is very animated and knows how to motivate Malachi; he always tells Malachi to use his “dinosaur teeth” to chew food. We were working at him eating him cupcake and Malachi crunched so hard onto the plastic spoon that it cracked. He froze and I watched a look of fascination come over him that he made such a loud noise with his bite. And naturally, he decided to bite down even harder, shattering the plastic spoon into pieces. I swiped his mouth with my finger as fast as possible but didn’t get it all before he took a big gulp, swallowing a big plastic chunk. Oops!!

So far he is okay but I have been watching him like a hawk. Levi did some major damage on the rest of that cupcake!

On Tuesday and Wednesday Malachi went to school for a few hours. His class has been somewhat healthy lately so we decided to let him go!

Wednesday Malachi got to ride his horse and had the best session he has ever had. Even when it was over he was a bundle of energy. I love seeing him so happy. 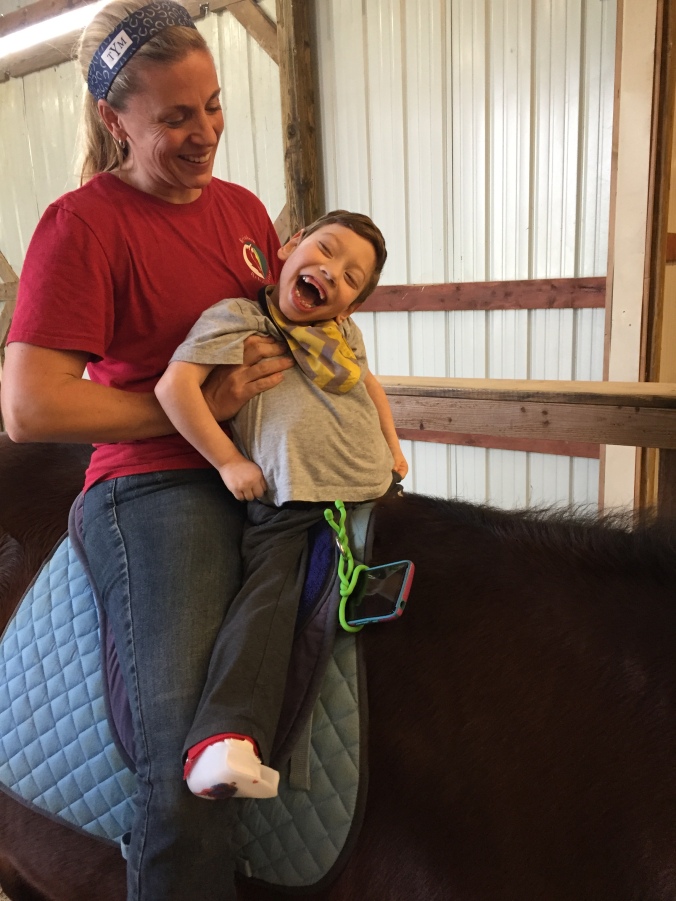 Our adventurous week continued on Thursday when Malachi and Levi got to take a “Thank You” cookie cake to the robotics and mechatronics class that adapted Malachi’s Wild Raptor for him. While we were there the boys got to see some of the robots the class is working on. We also left the Wild Raptor there so the crew can work on the step by step tutorial they are making so that other special needs families can have the info. 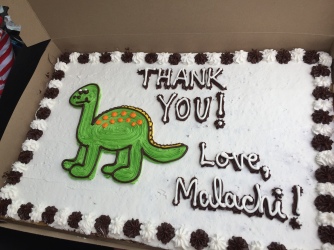 Friday we made a trip down to the hospital for Levi’s synagis medication shot. These shots are extremely painful as the medication burns going in. It is always a miserable experience but we are grateful insurance deemed him worthy enough to get them this season. The shots are nearly $9,000 per season! He will get his final one in March, and we will be pushing for him to get approved next year as well.

We have thankfully stayed pretty healthy this season but on Thursday Jake came home with a cold. Friday night Levi started vomiting once an hour. For a typical kid you would assume it was a stomach bug, but with Levi even the slightest drainage dripping near his airway triggers his gag reflex. So we watched and waited to see what it was going to turn to. Around 1:30 in the morning he spiked a fever of 102.6 and I started to get worried. I cranked up his oxygen and gave him some fever reducers and he fell asleep laying on the living room tile floor. We were up and down most of the night with him vomiting pretty consistently but by Saturday morning the fever was gone and the vomiting slowed down. 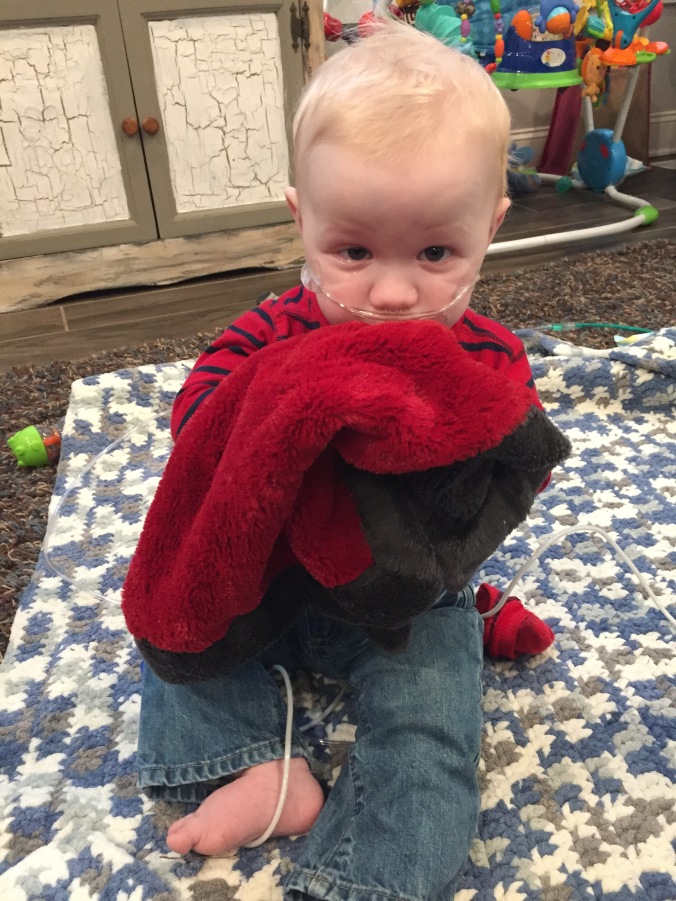 It never really turned into anything else and Malachi and I avoided contracting anything!  But it was a pretty sleepless weekend in our house between sick Jake and sick Levi.

My niece and nephew had a birthday party on Saturday that Malachi had really been looking forward to so he and I left the sickies at home and headed to the party. We talked on the way there about how there would be a bouncy house, cake, and lots of kids his age and Malachi was grinning with excitement. The party was inside a gym and when we got there I could tell that all of the noises (especially the loud blower on the bouncy house) were difficult for him to process. I tried to distract him by talking about the dinosaur cake but after 30 minutes he started to uncontrollably cry, something he does when he gets overwhelmed. I asked him if he wanted to leave and he didn’t answer me- which told me he really didn’t want to leave.

He put on a brave face but it only lasted 5 more minutes and he started sobbing again. When I asked him again if he wanted to leave he signed a sad little “yes”. It broke my heart to see him struggle…he clearly wanted to stay but his brain just couldn’t handle it. We didn’t stay long enough for cake so after I loaded him into the car I took him to the cupcake shop down the road and let him pick one out.

Oh sweet little Malachi. I made it through the whole birthday without shedding a tear, but this picture popped up in my Facebook Timehop a few days later and it did me in.

Flashing back to those fragile days just overwhelmed my heart. Malachi and I still hold hands every night as he goes to sleep. 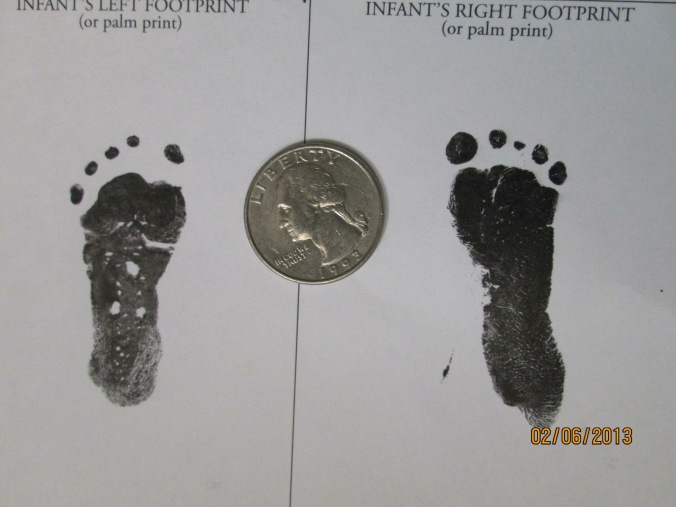 What a journey it has been.

Sometimes I spiritually get into valleys and I forget to continue to pray for the big miracles. I look at Malachi and I want to see a healed child..but then I realize the monumental nature of my request. So I transition from praying for BIG miracles to praying for small baby step ones. Like praying that Malachi will be able to speak coherently. Or that his seizures will stop completely. Or that he will be able to hold his head up for long periods of time.

But then I always feel conviction over than mindset, almost as if my lack of verbalizing the big miracles is questioning God’s power and abilities. This week I am back on that mountaintop and praying for the big healings for both of my boys.

A story from the Bible keeps coming to mind. In Daniel 10 he describes a vision that he had of an angel.

10 A hand touched me and set me trembling on my hands and knees.11 He said, “Daniel, you who are highly esteemed, consider carefully the words I am about to speak to you, and stand up, for I have now been sent to you.” And when he said this to me, I stood up trembling.

12 Then he continued, “Do not be afraid, Daniel. Since the first day that you set your mind to gain understanding and to humble yourself before your God, your words were heard, and I have come in response to them.13 But the prince of the Persian kingdom resisted me twenty-one days. Then Michael, one of the chief princes, came to help me, because I was detained there with the king of Persia.

Like me, Daniel had petitioned God for a huge request and as this angel said, he had been sent by God the same day as that prayer. But due to some spiritual warfare the angel was delayed from making it to Daniel.

This week I have found myself pondering if maybe there is some major spiritual warfare going on right now that is delaying the answers to my prayers. But I am finding comfort in knowing that God’s will always wins. While the devil may delay, God always wins.

So I will continue praying for the big miracles. The unfathomable. The unlikely. Because my God can do “immeasurably more than all we ask or imagine” (Ephesians 3:20).

And a random side note- I stumbled upon a support group for Levi’s diagnosis! This is HUGE! Some statistics quote that in the United States, bilateral vocal cord paralysis happens in 1 out of every 1 million births. Connecting with other moms who can answer questions for me has been a blessing.

Based on what I have learned so far, I am absolutely positive we made the right decision for Levi in trying to avoid the trach. I have also learned that we are blessed that Levi has a voice…not many kids with BVCP are able to speak above a whisper.

Please join me in praying for big miracles this week. That Levi’s vocal cords wake up and start functioning as they should. That Malachi would walk on this earth and proclaim the glory of God in his own words. You know…the BIG stuff!!