This week has been filled with heartwarming brother moments, medical frustrations, and our typical weariness. Let’s start out with a feel good and talk about the brotherly love.

There have been several times this week that I have felt my heart melt in ways I didn’t know were possible. Levi has become infatuated with Malachi and wants to be close to him at all times. The new chair at the office is just large enough for them to snuggle in and Levi is constantly trying to find his way in it to sit with Malachi. Every morning they sit and watch cartoons together or play with a toy.

Levi can’t always activate Malachi’s big boy toys like Malachi; when he gets frustrated by one he will reach over and grab Malachi’s hand and try to get him to show him how, which Malachi absolutely loves. It is so sweet getting to see Malachi be the big brother and to see Levi look to him for guidance. I wish the world could see Malachi through the eyes of Levi! 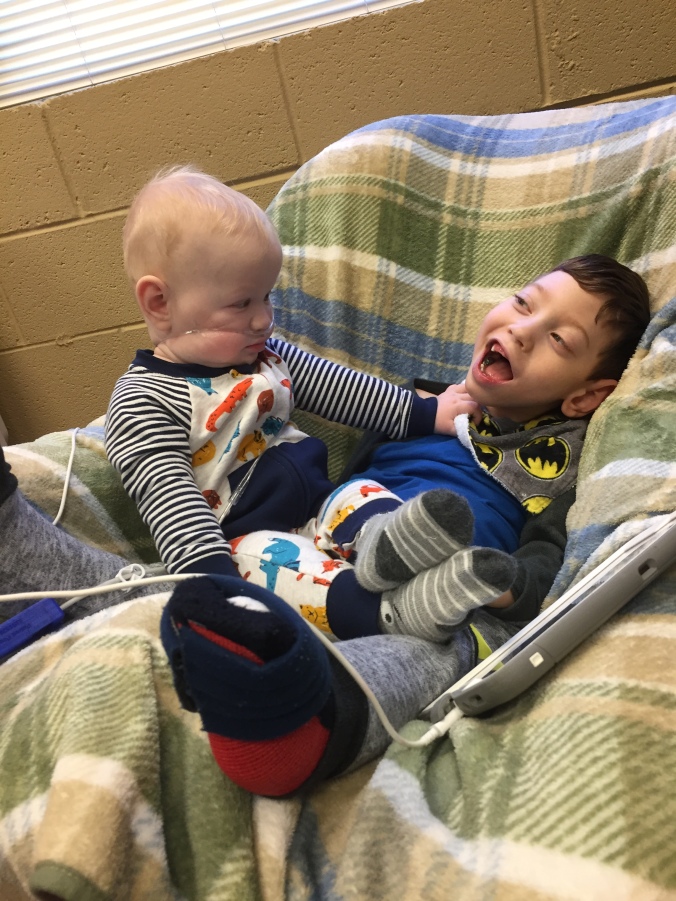 Malachi treasures their cuddle time and will even give Levi kisses when they are cuddling. Here is a video:

Levi has been “kissing” Malachi back but doesn’t quite have the grasp of what a “normal kiss” is like- he mimics what Malachi is doing and licks Malachi’s forehead. Then he turns and smiles at me, so proud of his gesture.

The pureness of their love has made me an emotional mess this week. But those are the type of things I will gladly give my emotions to.

Here is another sweet video of Malachi laughing at the cuddles:

We had a whole slew of appointments this week to navigate around. Dentist, Gastroenterology, feeding therapies, pulmonology, physical therapies….

Malachi has a loose tooth which is an interesting little adventure. He only has one real tooth- all the others have been whittled down and crowned due to lack of enamel. As soon as the loose tooth gets a little looser we will likely yank it to keep him from swallowing it/choking on it accidentally.

Here is a photo of him and daddy playing some soccer this week in his Wild Raptor! 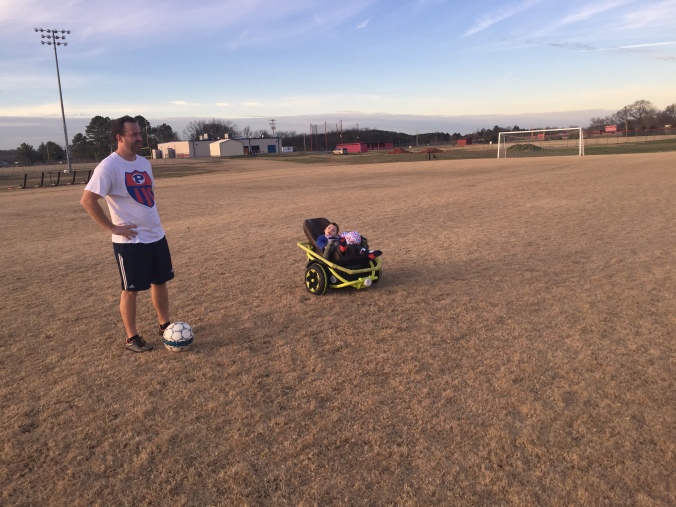 The GI visit for each of the boys went well and we have made some significant changes in each of their feeding regiments. As usual the doctors want Malachi to plump up a bit more. I have been trying so hard to help Malachi get through the tube anxiety and was able to do one pump feed every day this week.

Levi is one plump little one year old and looking more and more like a big boy these days. He is nearly 21 pounds and big brother is weighing in at 27 pounds. 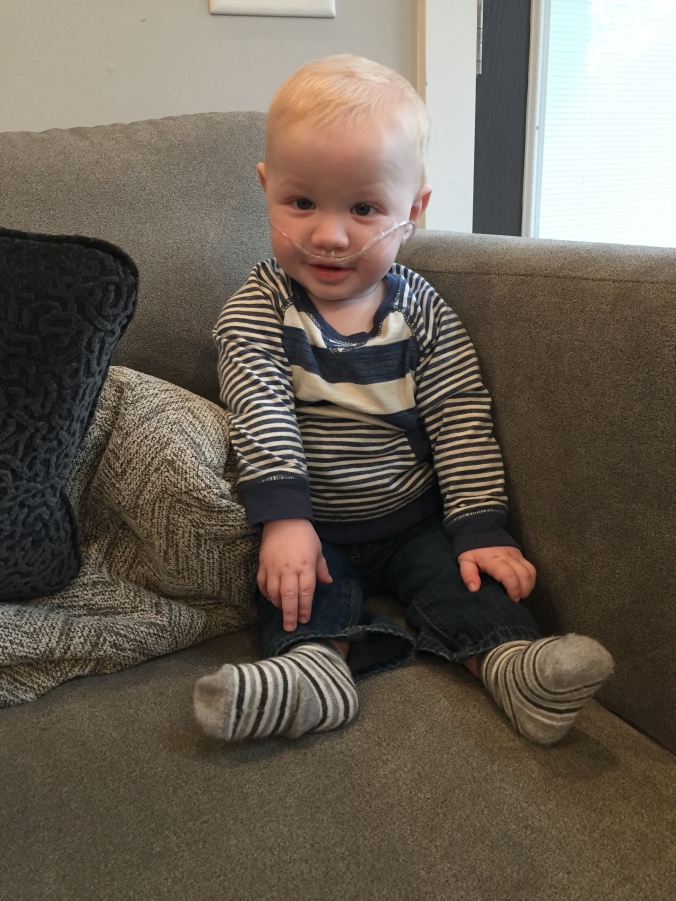 This week we tried some sensory play in some mac and cheese…it didn’t make it into his mouth but progress nonetheless. 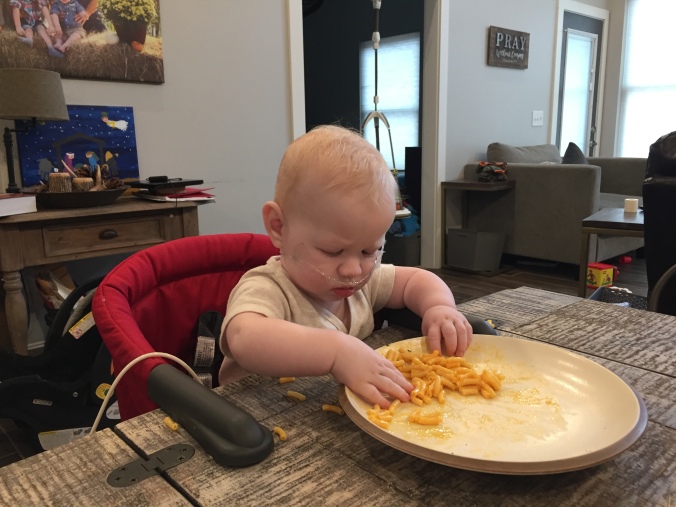 Levi also had a pulmonology appointment to get his synagis shot (medication that lessens the effects of RSV if he gets it). These appointments are extremely fast since we don’t have to see a doctor, it is administered by a nurse. The appointment was at the new outpatient center I was telling you about previously. We made the hour drive, checked in and watched our name like a hawk on the screen. One by one every other name disappeared from that screen yet ours remained. I thought “Surely they didn’t forget about us?” seeing as I was staring at the same screen they were.

But alas, we were forgotten once again. I know I have shared this with you before, but there are few things that make me more emotional than being forgotten at specialist appointments. It is so much work to get the boys loaded up and on time to doctors visits and seeing the efforts to respect their time not reciprocated does me in. It had been over an hour and both the boys were cranky, VERY stinky, and momma was emotionally fragile. I fought back tears during the 5 minute appointment feeling more isolated than ever before…even the medical professionals just don’t seem to get it…the difficult nature of our every day.

Of course, the emotions from that carried over into the rest of my week and put me in a dark place. And oh, how dangerous those dark places can be. Jake was gone for two days on a church retreat leaving me with my thoughts.

One of the biggest thought consumers these days has been what the future looks like for Jake and I. Someone posted this picture on Facebook this week and it overwhelmed me a bit. 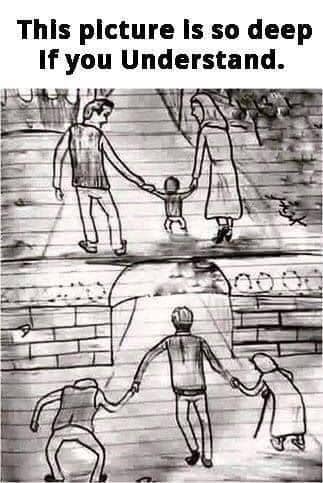 This picture portrays the natural route that many parents take. But our picture is meant to be a little different, and sometimes the unknown of that picture attaches itself to my thinking.

Will Malachi still be alive when we are old? And if so, how will we take care of him? We are physically already starting to feel the weight of his care. The idea of an organization having to take on his care when I am unable to makes me nauseous. But so does the idea of having to bury him as a child. I am sure you can see the helplessness of the thinking cycle I get stuck in.

Will we ever get to enjoy grandchildren? We have been recently told that Levi’s brain damage is likely more extensive than we realize. While I choose to believe that God will make his brain whole, there is that realistic side of me that wants to walk down the “what if” paths.

Faith has to be different for Jake and I.

I remember bringing Malachi home and thinking that he was going to be 100% healed, and that no one would believe how healthy and typical he was based on his medical history. We were simply waiting for our miracle, but we just knew it was coming any day.

But these disappointments have transformed my faith. And it has reminded me that we are simply passing through this world, headed towards a more beautiful one.

I read a quote this week and it has played on repeat in my mind. While I find ways to apply it to my motherhood journey I feel that many of you will be able to do the same in your own ways.

“One of the biggest sources of conflict between you and your kids is when they refuse to bow down to your idols.” -Dan Allender

I had to recognize that “normalcy” for my children had become an idol. I find myself getting so angry each time Malachi has a massive seizure, or Levi has to be turned up on his oxygen. It is a reminder of failure and unanswered prayers. The disappointment that hits each time that state of perfection isn’t reached drives a wedge in my relationship with God.

So back to thinking about the boy’s future…that image of “what it should be like” I now recognize as an idol. When we start to think we can whine to God about what our life should be like, we are playing a dangerous game with our faith.

I am also working on releasing my idol of control. And could use some prayers specifically that I find peace in trusting God with the future of my family.

Please also pray for both of the boys. They are both having some intense coughing fits but no other signs or symptoms for now. We have another wild week ahead and can’t afford to add sickness to the mix!