Call me crazy, call me courageous, call me utterly stupid but I am writing this blog post from a hotel room in South Carolina- alone with both of the boys. Tonight has been exceptionally exciting but more on that in a minute.

Each year we take our youth group to an amazing summer camp about 4 hours away in South Carolina. Malachi and I have gone every year, and while I strongly desired to go this year we decided that it would be too logistically and physically difficult with both boys.

Then Wednesday night rolled around and as I taught the youth lesson I felt like God was telling me to go. Their spiritual health is more important than my comfort. So I went home, found a hotel room close by with a fridge and a sink, and started to pack our bags. 10 tanks of oxygen, food supplies for everyone, ice packs, Tomato seat for Malachi, rock-n-play for Levi, medical machines, worst case scenario kits, freshly printed updated medical histories for both boys in case of emergencies…all packed in such a way that I could get the boys and the gear into the hotel alone in just a few short trips. 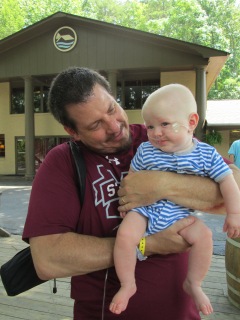 I kept telling Jake that if God called me to go to camp, then God would also provide the energy needed to survive it.

So far that has been the case! Last night was a chaotic one with us staying at the camp until nearly midnight . By the time I got the boys back to the hotel room they were wide awake so we watched cartoons and played until 1:30. Jake is staying at camp with the other 20 kids and chaperones from our group, so I have some help during the daytime. 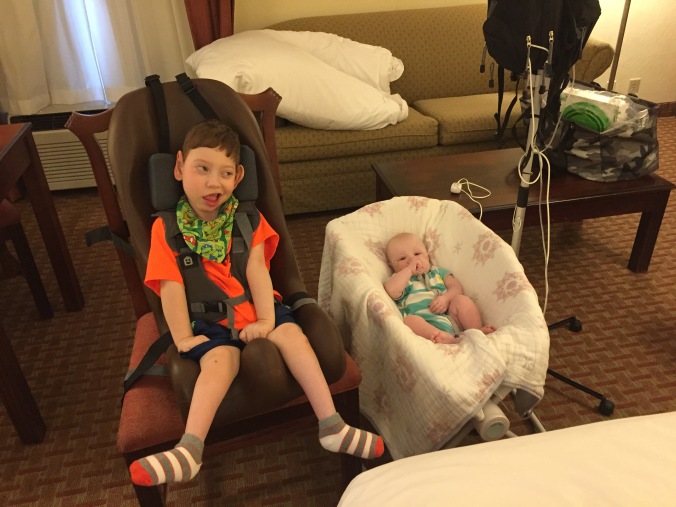 Then the snafu in my planning- because I booked the hotel so late I was only able to get a room on the second floor- a handicap parent’s nightmare. As we checked in I thought about the safety of the boys in case of fire emergency and felt confident I could carry them both, clumsily but doable. What I didn’t figure into the equation was power outages…and of course in life’s funny way the power went out first thing this morning. After several hours of Elmo music on my phone and still no power (which equals no elevator to leave) I called for reinforcements and Jake and the chaperones drove over to help me cart the boys and their gear down the stairs.

Then came tonight’s adventure. You may not know this about me but there are a few things that absolutely give me the heebie-jeebies. One of those is hotel rooms. When we got to the room on Friday I used an entire canister of Clorox wipes, cleaning every surface we could possibly come into contact with. I took my own rubber gloves and checked for bed bugs. I also used the rubber gloves to fold up the comforter and place it away from me and the boys. I wore my shoes the entire time and if anything touched the floor it went into the “contaminated” pile.

Was that overkill- yes, very likely so. But with my special boys I didn’t want to take any chances.

Now fastforward to tonight. We had a great day at camp! Tonight I got to spend some time with our group and I was so encouraged to hear how God is working in their lives! I stayed later than I intended to and got to the hotel just after midnight.

I wheeled the boys in and went to set my bag down and there it was…sitting on the sheets of the bed was a giant, single rat turd. Mmmhmmm you read that right.

One of the top thing on my phobias list is rats. And with Malachi and Levi in the room I knew I would never be able to close my eyes knowing there could still be one in the room. So I packed up (an hour long process) got a refund for the night and drove 20 more minutes in the wrong direction to find a nicer hotel. There I had to do the exhausting process again of carting all the gear in and unpacking. It is now 2:30 am and I just got both of the boys in their PJs!

You can’t make this stuff up.

Alright, back to camp. The biggest issue on my radar here is Malachi’s body temperature as he has been struggling this summer. Thanks to some battery operated clip on fans and a cooling towel he has been handling it well.

I have been thinking back to the last several summers at youth camp. The first two years were a “true challenge” as it was one of the first times I had taken Malachi alone on a trip. Then last year rolled around and the “true challenge” was managing en ever growing Malachi in addition to being pregnant. Now this year the “true challenge” has been amped up as I attempt this with two medically needy children, one of which is a illogical 7 month old.

As I thought about our history here it was such a reminder of the way God works. Jake and I often reach a point in which exasperatingly we say “We just can’t handle anything else!”

Yet God continues to challenge us. And with each challenge He equips us even more for the difficult tasks He gives us.

That is one of the beautiful things about God- that He equips the called. You don’t need prior experience or a shining resume to be used for something great. 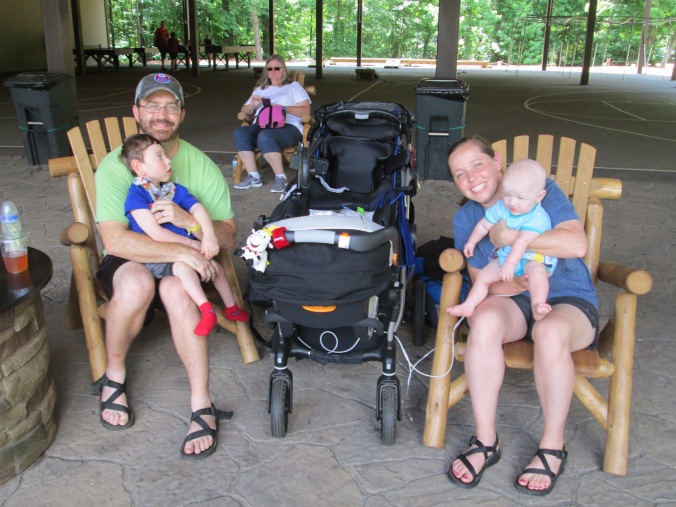 As far as pre-camp updates, we are still on the road for medical and therapy appointments nearly every day. This week was the much anticipated feeding therapy appointment for Levi which went very well! So well, in fact, that we have been cleared to start attempting solids by mouth. They gave him a few bites of peas which he wasn’t too keen on but he ate it well without signs of aspiration.

We are learning that the Levi you read medical histories about is nowhere near the Levi that medical providers lay eyes on. We are continually surprising providers with a relatively typical child- PRAISE THE LORD!

Levi is still pretty loud with his stridor but is still managing his oxygen saturations very well!

Last week I told you that I was munching on some scripture and still trying to grapple with it before I shared my thoughts with you. Well, unfortunately I haven’t come to a good conclusion quite yet but still think I need to share it with you…maybe it will give you some thoughts to munch on when you are driving this week.

In the Old Testament (2 Kings 4:8-37) we read about a nameless woman. The Bible only refers to her as the Shunammite woman. When the prophet Elisha walked into town she provided him with a meal to eat. Each time he came into the city she offered him a meal. One day she told her husband that she perceived that Elisha was a man of God and felt that they should make a room for him to stay in whenever he came to town. Such a kind gesture of hospitality…I have no problem with the story up until this point.

One day Elisha is in that room and he tells his servant to go and get the Shunammite woman. Out of gratitude he asks the woman if there is anything he can do to repay her kindness. She turns him down and says she is well taken care of. Later on Elisha is speaking to his servant:

Gehazi said, “She has no son, and her husband is old.”

15 Then Elisha said, “Call her.” So he called her, and she stood in the doorway. 16 “About this time next year,” Elisha said, “you will hold a son in your arms.”

“No, my lord!” she objected. “Please, man of God, don’t mislead your servant!”

17 But the woman became pregnant, and the next year about that same time she gave birth to a son, just as Elisha had told her.

WOW what an awesome ending to that story! She was so humble, even turning down a blessing when the opportunity was provided for her to name her want/need.

But that isn’t the end of the story….

And this is where I struggle. This story has been playing over and over in my mind since Levi’s last surgery. God blessed this woman with her greatest desire- a son. This was a true, sincere miracle. A true blessing from God.

And then that blessing died. My momma heart feels the pain that she felt in that moment. And the confusion. How could God send her a blessing only to swiftly take it away years later.

And then I thought about Mary, the mother of Jesus. When the angel came to her he said: “Greetings, you who are highly favored! The Lord is with you.”

And in that account Mary was given a miracle…only to be taken in a brutal yet purposeful fashion from this earth before her very eyes.

So why did the Shunammite woman lose her special blessing? I think my difficult time with this scripture is due to the empathy I feel towards this woman. It should also be mentioned that at the end, Elijah raised her son back to life and all is well again.

Sometimes as Christians we look for that safety net. We look for signs that things are going to be just fine. We seek after security in our feelings through fruitless means. We think that when we are blessed and “highly favored” that surely nothing bad will happen to us.

But being a Christian has nothing to do with “protection” from challenges in life. It requires a daily walk with God, and leaning heavily on Him for strength when things don’t turn out as you would expect.

Oh my goodness I want so badly to write more but my eyes just can’t stay open and both boys are asleep.

Thank you all for checking on our family this week! Please continue praying for miracles for each boy and pray that until the miracles come God will send His angels to protect them.

8 thoughts on “He Equips The Called”