Look who made the front page this week! The article was so kind and complimentary of the way Jake has carried himself through our difficult few months. Here is an excerpt from the article:

“Throughout these troubling times, the class noted how Carroll would teach his class all week, then travel to Cincinnati to be with his family in a special hospital for Levi until Sunday, when he would return home and begin his week anew. ‘We’d see him coming down the hallway just smiling, you’d never have known that he had anything going on in his life,’ Stewart said. ‘When we found out, we knew where we wanted the money to go.'” 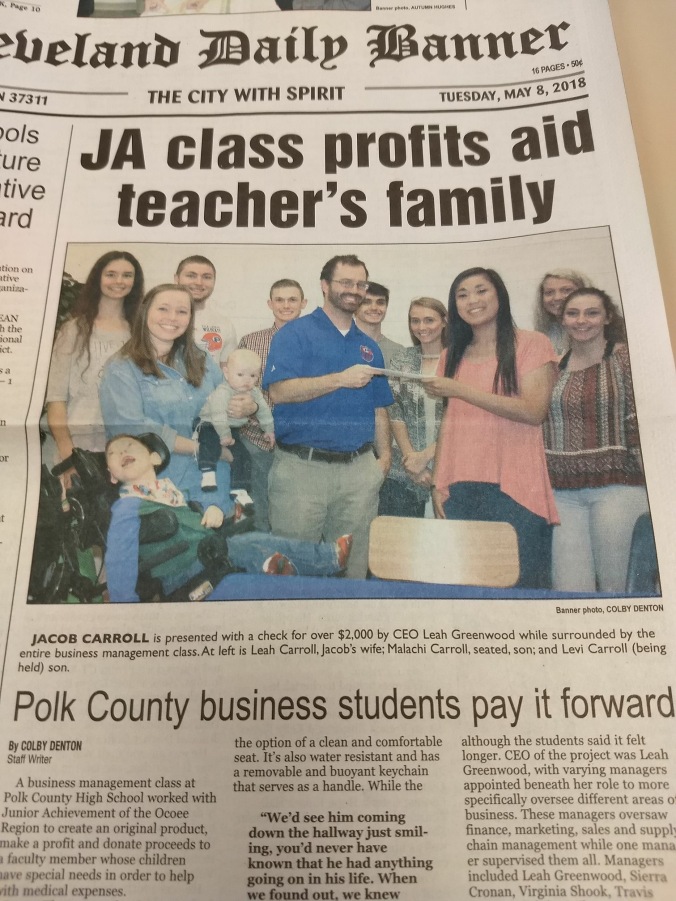 When I read the article I told Jake that he was going to cry when he read it. He rolled his eyes at me and laughed, saying there was no way a newspaper article would make him cry.

He was wrong. We both teared up as we read it. It was so wonderful to hear that the way Jake carried himself through our challenges was noticed by the teenagers. I hope that like a pebble thrown into the water, these teens will remember that bad times don’t always have to break you…especially when you walk with the Lord.

Oh what an adventure filled week Malachi has had! This video is sure to put a smile on your face:

Malachi’s field trip on Tuesday was a big success; he was so excited when we got there and heard all of his friends and teachers. Just like I promised him, I dropped him off and left to give him a little independence.

His teachers said he did great and did not have a single seizure the entire field trip. Usually new environments and lots of stimulation can bring those on so this was very surprising. 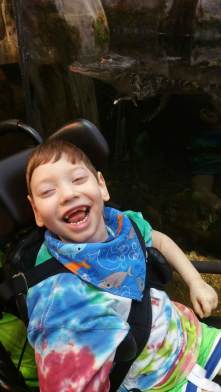 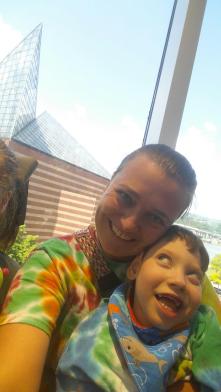 Side note- his seizures have changed a bit lately. Malachi has intractable epilepsy which means they fail to be controlled. His brain is extremely globally damaged (which means the damage is all over and not in one specific area) so he has several different seizure types. These days instead of throwing his arms outwards during a seizure he is bringing them inward and claws at his face in the process. He isn’t doing it on purpose, but when his brain panics his muscles all start to contract. It is making me a nervous wreck as he is getting dangerously close to his eyes. His grip during these episodes is incredibly strong and even I can’t pry open his fingers when they grasp on to something. 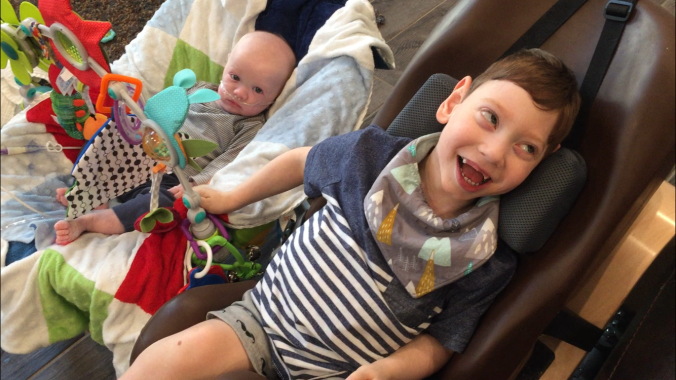 I couldn’t decide what to do with myself and Levi while we waited, then I remembered that I had a Red Lobster gift card in my wallet! Score! I had a wave of confidence and off to Red Lobster we went. Needless to say the lunch was a nightmare haha. I forget how loud Levi is when he breathes as I have grown used to it. Red Lobster is a quiet place so we stuck out like a sore thumb.

Feeling self conscious, I ordered my food immediately when we sat down so we could get out of there quickly and not disturb anyone else’s meal. And let me just say…it is a good thing I did as the meal continued to spiral out of control. Levi projectile vomited twice, sounding like a choking baby dinosaur each time which only drew more attention. Then he decided to loudly fill his diaper and at that point I realized that we needed to be done.

I think I set the record getting in and out of Red Lobster and consuming a full meal in under 17 minutes. I am pretty confident the restaurant was glad to see us go. Oh well- we tried haha!

Well it looks like the jealous bug has officially bit Malachi. This week we are seeing some typical behaviors for a five-year-old first time big bro. If Levi is getting some extra attention Malachi will start crying until we show him some attention too. I have been trying my best to dote on both boys equally but it still hurts Malachi’s feelings when I focus on Levi. 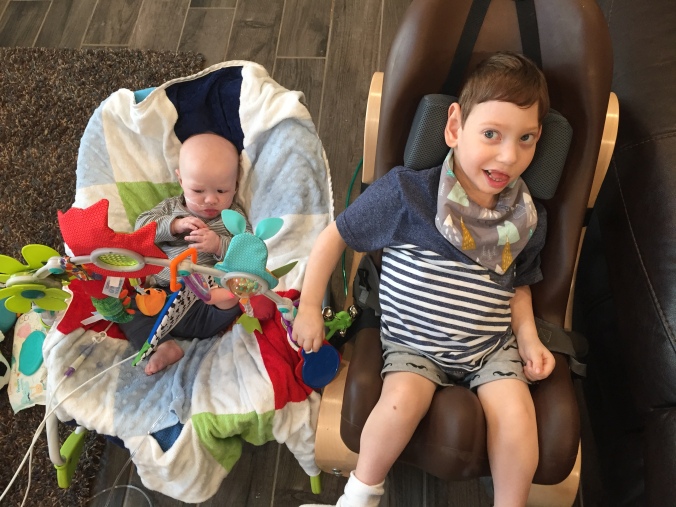 To combat this, I have been trying to give Malachi more responsibilities as big brother, like “watching” Levi when I have to go into another room briefly. Malachi thinks he is pretty big stuff when this happens. Maybe too big for his britches as once again he flung himself out of his seat and onto the floor this week. It nearly gives me a heart attack every time!

I took a few videos for you so you can see their sweet interactions. The first one was when I asked Malachi to show Levi how to play:

And this second video is just too sweet not to share. I let Levi sit on Malachi’s lap and he snuggled right into him. Malachi was so gentle and even brought his arms up to hold Levi:

We also had a little excitement at school this week. I went to pick Malachi up and his teacher told me that a bear walked up to the fenced in playground and started scratching its back on the fence! Just another day in the country.

I have been tackling my incredibly long to-do list. I have been devoting a few hours each day to making phone calls to insurance, specialists, and other medical related organizations to try to get the best services and care that I can for each boy. I took this screenshot and sent it to Jake when he asked what we had been doing all day. On this particular day, the phone calls continued until 5:30 that afternoon.

I took Levi for an evaluation with Malachi’s physical therapist so he can start PT this summer. She was pleasantly surprised with how on target he seems to be, which was music to my ears. I also met with Early Intervention Services this week to set up a care plan for him. We have been able to get a really great feeding therapist to take his case and I am so eager to start those sessions and get him eating by mouth. 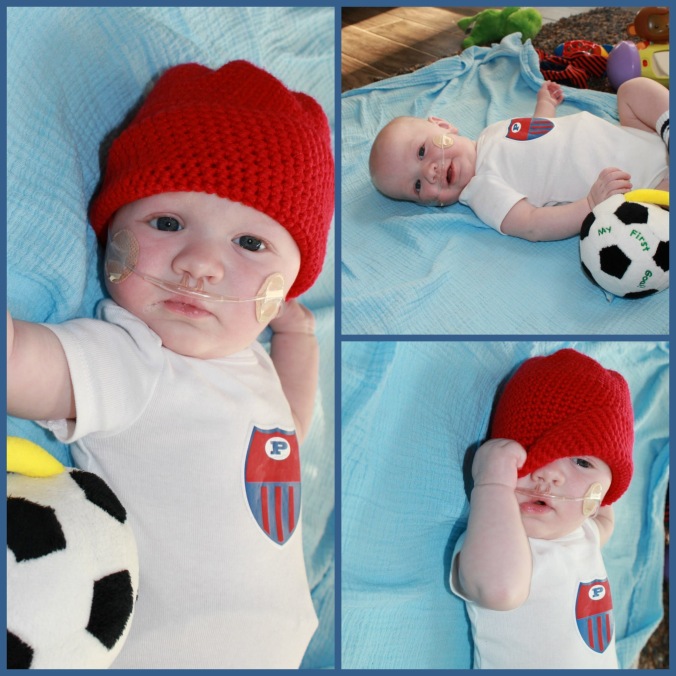 Levi is changing by the day! He will be 6 months old tomorrow which is so hard to believe. He has turned into quite the momma’s boy which makes me so happy. He does silly things these days, and smiles a lot. He is starting to want to be held often (by mommy only) and he loves his toys! The toys seem to create the most jealous moments for Malachi so I don’t let him play with Malachi’s favorites unless he is at school. Levi is also putting everything he can into his mouth. 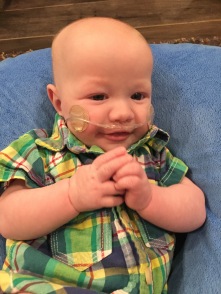 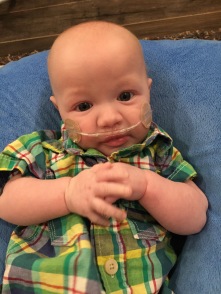 Today is Mother’s Day here in America (we have a lot of international followers). Jake and I are fuddle duds who don’t celebrate many holidays so we aren’t doing anything super special- my gift is a nice long nap as soon as I finish this entry.

But last night I started processing the term “Motherhood”.

Motherhood has always looked so different for me. The first time I saw both of my boys was on the screen of a digital camera. It was 3 long days before I got to meet Malachi, and while I did get to meet Levi before he was transferred, it was two days before I got to visit him. I will never forget those nights in the hospital for both boys. I laid in bed listening to babies crying and being comforted by their mothers. I heard the voices of visitors gushing over the newborns in the rooms around me. Yet there I was, alone and childless. My plunge into motherhood left me feeling very desperate, alone, and unworthy. Just a shell of a mother with no child to prove that I had in fact given birth.

Motherhood for me means I have to sign countless medical releases to allow doctors to poke, prod, heal, and fix my children, knowing the painful state they will be in after. And I have to be their voice. I have to think through worst case scenarios and research to make educated decisions for their care.

Motherhood for me means that I have not only watched but held down my children as nurses have attempted to get hundreds of IVs, intubations, and blood draws. I have had allow them to inflict pain on my children, pleading desperately with God that in the long run we will see the benefit. This is the hard stuff of motherhood…this is the type of motherhood I don’t wish on anyone else.

Motherhood for me means I have to helplessly watch Malachi be overtaken by seizures that scare him but have to keep myself calm so he senses peace when he comes out of them. It also means I obsessively watch every movement for Levi, terrified that he too will develop epilepsy. Motherhood for me means always being aware of SUDEP (sudden unexpected death in epilepsy) and waking up several times a night to make sure he is still breathing.

Motherhood for me is equated with fighting. It is desperately trying to get others to see the strength and potential in my boys. To see their worth. To share the hope that I have for each of them. Mothers shouldn’t have to fight this hard.

Motherhood for me is a sea of emotions. Every day I fight temptations of depression, grieving, and loss. But I know that giving into those emotions will only hurt my ability to care for my children, so I have to find ways to stuff those emotions out of my thoughts and focus on the good.

Motherhood for me is laying in bed at night thinking about the unknown. The questions marks, the what if’s, the variables that could go wrong at any moment. I think about future surgeries, future hospital stays, future bad news, future emergencies. And while I want to prepare my heart for them, I just don’t think I will ever be able to adequately do so. So I simply have to swallow the lump in my throat and focus on better things.

Motherhood for me means a constant, daily, reliance on God. Because I simply cannot do this alone. The task is just too large for me to do apart from Christ.

Motherhood can take on different shapes and forms for each individual person. Sometimes I get hit with pangs of jealousy, just like my Malachi, as I watch how simple motherhood can be for others. Oh to have only the good and fun parts, and not have to worry about the bad.

But there is a quote that kept coming to mind this week:

Paul tells us in Philippians:

As I read these words this week I found myself struck by the honesty of his words. It is so easy to find discontentment in our lives. It is so incredibly easy to find things to whine about, things to mourn over…and let me say that there is a time and a place when those moments of mourning are completely necessary and acceptable.

But there is also something so refreshing and healthy about choosing to be content. And relying on Christ to give you the strength to find and cling to that contentment.

Motherhood to me means finding contentment and happiness peeking in through the storms. It means looking past the ugly, the difficult, and the hard and straining my eyes to find the lovely. And to not just find it, but celebrate it.

Please continue to pray miracles over my sons. We are continuing to believe that God will heal them both, and what a glorious day that will be!