The beginning of the week was a blur as Jake and I worked tirelessly to get the house packed up, moved out, and cleaned. I don’t know if you have ever moved and felt this way, but after boxes and boxes of “stuff” I am beginning to think we have way too many possessions! And OH BOY the messes you find when you move heavy furniture for the first time in 7 years!

Tuesday evening we tackled the things we purposefully procrastinated on: cleaning out the fridge, packing up the closets, etc. I had spent that morning filling the camper that our friends had so wonderfully set up for us down by the river. Things were looking great..the walk-through was scheduled for the next day…and then at 10:00pm the phone rang. It was our realtor letting us know that the closing was postponed from Thursday to the following Tuesday. I was mopping the floor when the call came through and I was so frustrated at this point that I put the mop back in the bucket and went to bed.

So here we were with a mostly empty house with the exception of a mattress for us, a mattress for Malachi, a couch to change him on, a chair to feed him in, and seven outfits for each of us. Wednesday we drove back over to the camper to unload the supplies we had already put in (food, etc) and then our dear friends broke it down and took it back to their home to help us avoid paying the daily fees to keep it there. (Thank you again Mike and Tina!)

Our life had gone from go, go, go to painfully slow overnight! Jake and I have been killing time playing card games and creating to-do lists. Tuesday right before closing we will move the final remaining pieces into storage, and after closing we will load up and head to Ohio for the holidays. We will still be moving into the camper for a week or two while we wait for the rental house to open up.

Malachi’s tummy just couldn’t seem to calm down on the antibiotic. After several days of severe diarrhea we finally were able to get it changed to something less intense. He has been such a happy kid since we made the change, and I am so grateful to not go through 6 outfits a day!

On Thursday Malachi and I headed to the hospital for his annual cardiology appointment. If you are new to the blog you need to know that these are my least favorite appointments out of all of his specialists. They typically take 3-4 hours and the entire process is just frustratingly ridiculous. This was one of those days where I wanted to throw an adult temper tantrum and refuse to go, but figured with the cable and internet gone at home and nothing else to do we might as well get it over with haha.

We got there early, hoping to jump in line before the other 11:00 appointments. And then the waiting process began. I employed all of my tricks with Malachi to keep him entertained- toys, music, silliness. After 30 minutes he was over it…and so was I. At the one hour mark something so strange happened…I started to get emotional. Now just in case you don’t know me well, I usually cry twice a year (well that may be an exaggeration, but you get the picture). It takes a lot for me to crack and uncontrollably shed tears. But as I sat in that waiting room watching the employees casually talking I just felt so disrespected. We had been up early for this appointment, drove over an hour to get there, and here we were waiting to even get into a room where we would then be put on another waiting list to actually see the doctor.

Immediately I felt ashamed that something like waiting would bring me to tears. But I just couldn’t get it under control. This was the same office that forgot about us in the waiting room two visits back, so I tried to get my emotions under control and went to the desk to ask if perhaps we had been forgotten again. They went to the back to ask, and immediately they sent a nurse to come and show us to a room. I don’t include these facts for sympathy, but more to give you a glimpse into the added frustrations of the special needs world. We fight and fight for our kids, racing them from appointment to appointment and are treated very second rate by many places. It is hard to not get bitter towards these systems.

Malachi got his EKG which looked great, and finally we were seen by the cardiologist who didn’t find any new issues or concerns. Since we were over a year and a half post op he felt it was safe to discharge us from his office, which was GREAT news. We flew out of that place as fast as we could and I breathed a sigh of relief when those elevator doors shut!

A local organization was hosting a toy event for special needs children in the area, but I assumed that we wouldn’t make it in time. As we pulled out from the hospital and I looked at the clock I realized that we could make it there right before they closed! When we arrived we were greeted by friendly folks that were ready to show kindness to my son. My emotions were still a little wavering, so the kindness was overwhelming. They had tables set up all over the room, each full of switch adapted toys for children like Malachi! They told us to try out as many as we would like and choose one for Malachi to take home.

This is SO generous! A switch is a large button that is easy to push. You can plug a switch into an adapted toy and it makes the toy activate every time Malachi touches it. The cheapest switch you can find is $70, and the cheaper switch adapted toys are $150 each. It is ridiculous how much companies take advantage! Jake and I have been trying to learn how to switch adapt things ourselves and have successfully been able to do some simple toys for under $5 each. 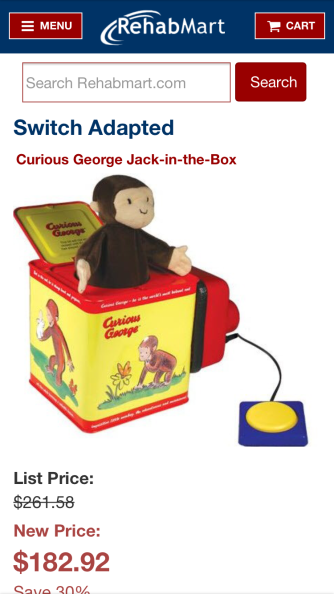 So imagine our delight to find a room FULL of adapted toys to play with and choose from! They handed us a switch to use to try out the toys and our adventure began! Malachi immediately got so involved in the process, hitting the switch like a crazy man and listening to hear what he had just activated. Very quickly he honed in on a stuffed Mickey Mouse that sang the clubhouse song. We kept shopping and tried out a silly looking Chewbacca from Star Wars and boy did that get a smile out of him. I put the toys side by side, hooked to two switches and asked Malachi which one he wanted. He pushed the Chewbacca, then the Mickey, then the Chewbacca, then the Mickey again…He clearly couldn’t decide. It was actually heartwarming to see him filled with such joy and indecisiveness. The workers were watching this process and said “Mom, don’t make him choose, just take both home!”

WOW! They even sent home two switches so he could play with both simultaneously at home! I am not exaggerating when I tell you that Malachi was SO EXCITED about his new toys. He smiled from ear to ear as we left, holding both tightly. It is hard for some to see firsthand, but Malachi is actually a very expressive and opinionated kid. I snapped some pictures of him leaving with his two new toys. 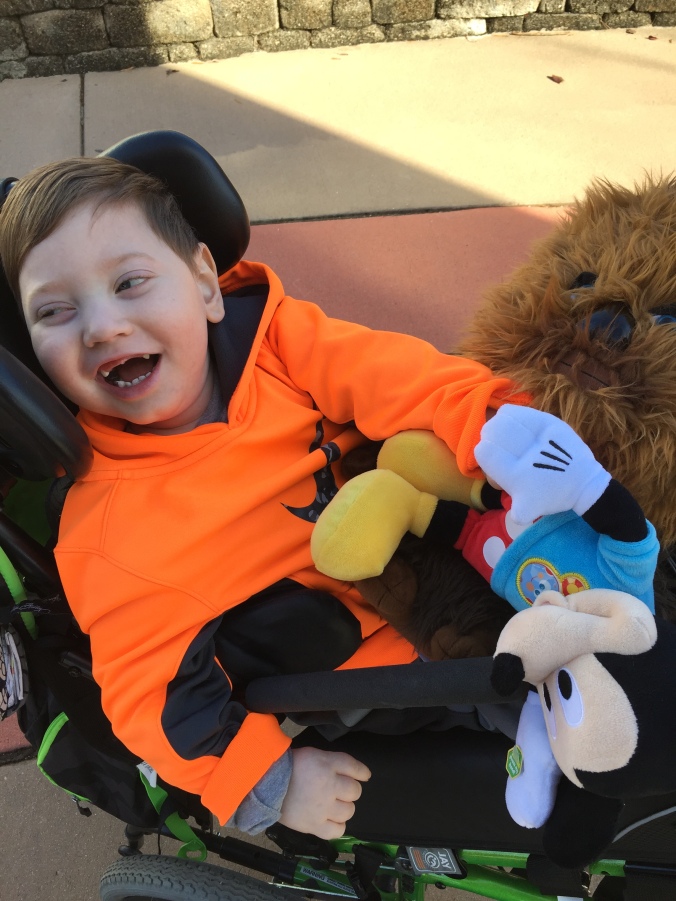 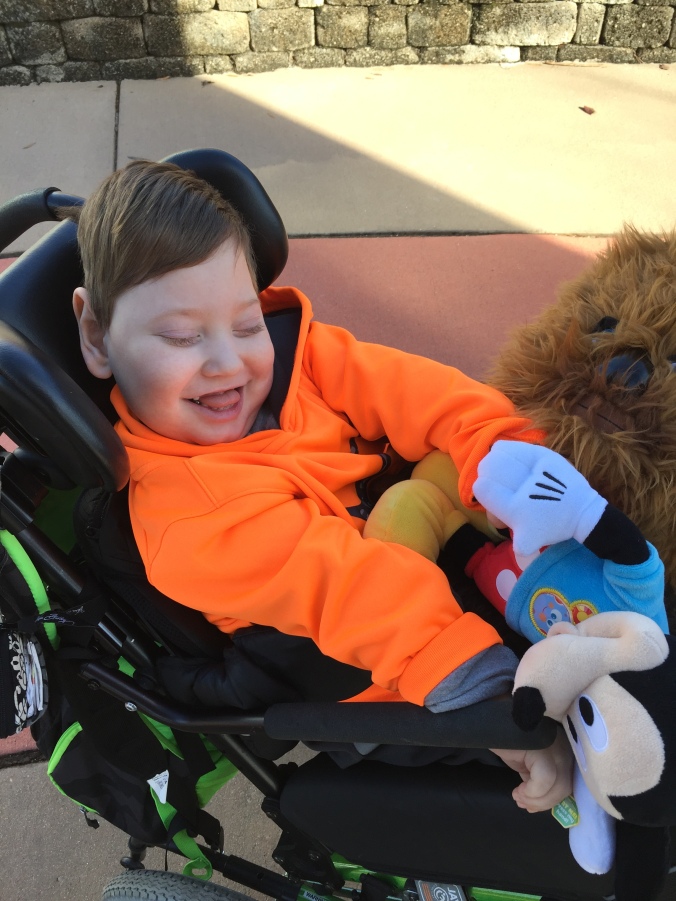 That is the look of pure joy!

So what started off as a crummy day morphed into one full of joy. Malachi has been driving us crazy playing with his two new toys. He is a little obsessed. I took a video for you to see how the switch works, and to let you see how fast he is cognitively responding these days:

The blessings continued to hit the Carroll family throughout the week. We have been surviving on sandwiches for most of the week since we emptied the fridge, so last night we decided to use a gift card and go to Cracker Barrel for dinner.

Everywhere we go we are watched. I feel eyes on us everywhere, and often times I find myself getting embarrassed about things beyond our control. Malachi drooling, having a seizure, licking his headrest out of boredom. Last night they seated us in a busy area with plenty of space for others to get around Malachi’s wheelchair, but halfway through the meal tables were moved creating a very narrow gap for people to get around him. At least once a minute there was a pile up of servers waiting patiently to get around his chair. The scene it was creating mortified me, and I found myself apologizing to each and every waiter and customer that had to wait to get by. I could see others around me watching the scene, and I could feel my face growing hot with embarrassment yet again.

When the server came to bring us the ticket he told us that someone had already covered our meal. This is the third time this has happened this month, and it humbles us EVERY time. It literally leaves us with no words. It was an act of kindness that really hit home last night when I felt so many eyes on us. It was an unspoken word of encouragement to me that not all those eyes are looking on with judgment or disdain. It was a pat on the back from a stranger and truly warmed our hearts.

Take free toys and free meals out of the picture, and I have to tell you that Jake and I live an extremely blessed life. God has shown us so much unmerited favor and we can feel His hedge of protection on our lives. Not a night goes by that we don’t find ourselves speechless with gratitude before our God.

We look at Malachi and his shining personality and thank God for allowing him to interact with us. We thank him for the advances Malachi has made in even the last 6 months. We thank God when we see Malachi successfully eating a small bite of chocolate cake without gagging for the first time ever. We thank God when Malachi sleeps for 7 hours straight through a rain storm (PRAISE THE LORD). We thank God when we ask Malachi a question and he excitedly answers “Yeah!”. Not a day goes by that we can’t find something to be thankful for. God has been so good to us.

Colossians 3:15-17 And let the peace of Christ rule in your hearts, to which indeed you were called in one body. And be thankful. Let the word of Christ dwell in you richly, teaching and admonishing one another in all wisdom, singing psalms and hymns and spiritual songs, with thankfulness in your hearts to God. And whatever you do, in word or deed, do everything in the name of the Lord Jesus, giving thanks to God the Father through him.

Do we have things to complain about. Absolutely. We are using a Lowe’s moving box as a table to eat nasty McDonalds on. There are so many negative things to focus on even at this very moment! But the Bible reminds us again and again to find praiseworthy things to focus on and give thanks to God.

That is my challenge to you all this week. It is not easy to ignore the negative…believe me! But let’s make this week’s focus finding the positive in all circumstances and taking the time to thank God for them.

We love you all!