What a whirlwind week it has been. The first half of our week was busy balancing medical appointments and at the same time getting the house looking good enough to be listed.

Monday’s horseback appointment was an excellent one and Malachi’s giggles continued throughout the session. I took fancy camera and was able to snap some fun pictures to share with you. 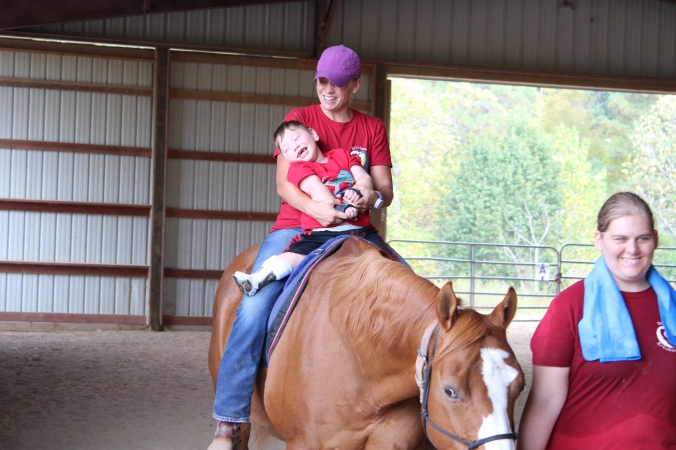 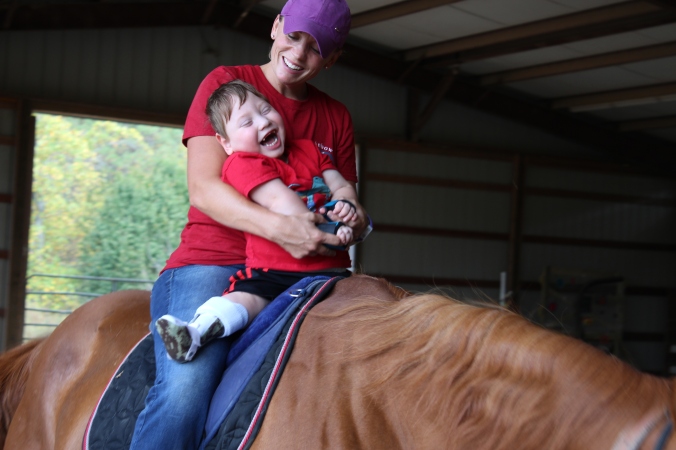 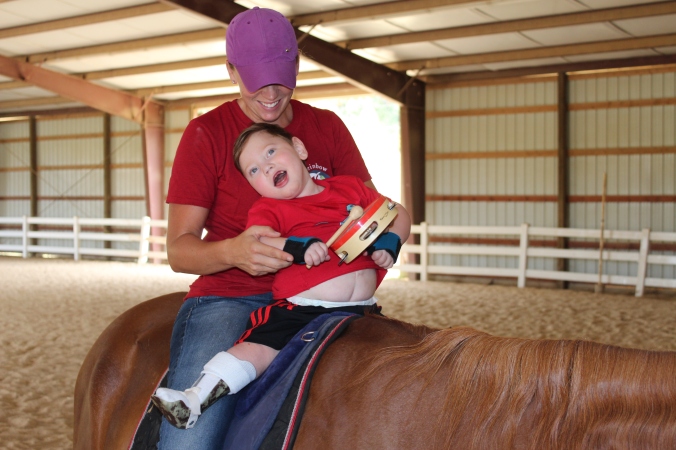 Tuesday was our visit with the new epileptologist. As you could probably tell from last week’s post, I was really looking forward to this visit! I was a little surprised to see that the doctor was just slightly older than me and he explained that he was fresh out of school. So while he has the medical degree and textbook knowledge he does lack in experience, which has its pros and cons. He definitely seemed fascinated by Malachi’s seizures and after reading his EEG report from our overnight Vanderbilt stay in the Epileptic Monitoring Unit, he thought it may be best to conduct another ambulatory EEG (where we take the machine home and video the session from home). To my knowledge, our local children’s hospital doesn’t have this technology but I didn’t want to be the one to tell him that! Maybe he can pull some strings.

So we definitely didn’t learn anything new or get any new guidance on his seizures, but maybe a young mind will be up for investigating and finding answers. We will go back in four months and are waiting to hear about the ambulatory EEG in the meantime. Malachi also had a chance to get his flu shot…always a necessity for a kid like him. Jake and I also got ours- a special call out to the Drug Store in Benton for coming out to my car to give me the shot instead of making me carry Malachi in!

Tuesday was a long day as we scrambled to put some finishing touches on the cabin. Jake and I worked until about 7:00 and came in for some dinner. We noticed that Malachi’s favorite dog, Gunner, was acting as though she didn’t feel so well which is not uncommon. She has a very sensitive tummy and is usually fine after an hour or so. We continued to keep an eye on her and by 8:30 her breathing changed a bit. She was still acting somewhat okay, wagging her tail at us and watching us walk around, but I had a gut feeling I should take her to the emergency vet.

We were able to get her into the back of the van, and Jake stayed home to take care of Malachi. I drove about 20 minutes to the local 24 hour emergency vet and got her inside to see the doctor. Her breathing continued to worsen and as the doctor looked her over she just simply stopped breathing. I looked at him and said “SHE JUST DIED?!” And he quickly listened for her heartbeat and told me it was beating faintly and asked if I wanted them to try to save her via CPR. I said yes and they quickly took her to a back room and started trying to revive her. It was unsuccessful and Malachi’s best buddy passed away Tuesday night.

I was pretty shaken, as none of us had any idea that was coming. The vet thinks it had to have been a heart issue since it happened so quickly. Jake obviously also had a very hard time with the news and it was an emotional week in our house.

Dealing with Malachi’s needs daily has changed the way I cope with stress. For me, I am constantly running on reserve, so I had to choose to be okay with the situation pretty quickly. I can’t waste energy focusing on something that can’t be changed. When vet asked if I wanted him to save her, it hit a little too close to home with Malachi issues. I found myself getting extremely panicky as I was flashing back to meetings with doctors during Malachi’s NICU days. I had to shake those thoughts and memories.

We have been trying hard to keep from saying her name, hoping that Malachi will not continue to call for her. Our other dog Boomer has been allowing Malachi to pet him, which is pretty rare.

Wednesday was listing day. The realtor came and took pictures, and by Friday night it hit the website. Jake and I have been blown away seeing how much attention the cabin has gotten, with the help of social media. It has been active for two days and has been viewed on Zillow 4,400 times! That is simply amazing! In fact, we had our first showing today after church. Here is the link if you are curious to see: http://www.zillow.com/homedetails/1099-Thomas-Rd-Benton-TN-37307/81262404_zpid/

The rest of the week has been a blur. Lots of errands and running from here to there! We were so incredibly busy that I have a hard time remembering.

After such a busy week, it was not completely shocking to me when Malachi started sneezing and coughing yesterday. He started running a slight fever last night, which we were able to control pretty well today. Nighttime is always more tricky so we will see what the next few hours hold.

So before the sickness hit yesterday, the three of us were able to go on a “date” with our Sunday School group to Chattanooga! Secretly Jake and I were both dreading the outing (mainly the location…too many memories) and were going with the sole purpose of being social. We met at an “Escape” place where they set up a mystery for you to solve in one hour. And let me tell you…it was SO MUCH FUN!! It was so challenging and Malachi loved listening to us scramble around the room, piecing together clues and finding secret passageways.

Afterwards we went to the downtown area for dinner with the group. Jake and I are incredibly stressed in big city settings in general, let alone downtown Chattanooga at 6:30 on a Saturday night- with a handicap van (eliminating street parking because of the ramp). Wouldn’t you know that the second we pulled up to the restaurant a parking spot opened up, and the driver gave us their parking voucher that had been pre-paid for the entire evening?!? Thank you Lord!

All in all, it was refreshing to be “normal”. I am so glad we chose to go out of our comfort zone for a bit!

Speaking of kindness, we have been overwhelmed by it this week. We were out and about more than normal this week and I noticed so many people going out of their way to open doors for us, speak to Malachi, and just show kindness. I had Malachi at the grocery store on Monday and a sweet lady came up to ask if she could help me shop by pushing my cart for me. On Tuesday I stopped at a Cracker Barrel porch off the highway to give Malachi his morning bottle with meds. I frequently will use their front porches and rockers when I am on the road, as it is way more comfortable than trying to feed him in the car. As I was getting ready to feed him, a young woman who had gotten into her vehicle to leave returned to ask if there was anything she could do to help me. So much kindness.

A stranger came up to me this week and said something that has been rolling around in my head for days. She said “There is a special place in heaven for people like you.” I graciously smiled and thanked her, but as I processed her words, they secretly bothered me a bit. Sometimes I am in sensitive moods and easily find offense in harmless comments- like the Walmart cashier asking “So what’s wrong with your son?” In my head I want to reply “Nothing- he is perfect!” But there is no sense in making people feel bad simply to alleviate my annoyance.

So back to the heaven comment. I felt like it was implying that I am somehow going to be more exalted simply because I am raising a special needs son. But we are each given a calling on our lives that we are expected to fulfill. Malachi is my calling. Your calling is something completely different, but MOST IMPORTANTLY your eternity in heaven isn’t based on your works here on earth. Christianity is about your relationship with God, and when your relationship is strong, your actions naturally lead you to act more like Christ. So my unconditional love for Malachi isn’t something I have to “work hard” to have, it is a byproduct of my relationship with Christ.

This week’s Bible study lesson focused on 2 Corinthians 12:7-10. If you haven’t done a devotional today, I encourage you to look up those verses and try to figure out why we should boast about our weaknesses!

Thank you for checking in on Malachi. Join us in praying against whatever sickness might be brewing in his body. And pray for some rest for a very weary mom and dad.