Sigh. That is the only word I can think of right now. In the last 6 hours life got complicated as Malachi started running a temperature and going into sick Malachi mode. This morning he started coughing but everything was checking out okay…no fever, runny nose or symptoms. So we watched and waited and it officially hit this afternoon.

When Malachi is sick his seizures increase and he throws up frequently. This gets tricky as we try to get fever reducing meds in him as well as his regular medications. In the last few hours he has thrown up his medications 3 times, so we aren’t so sure how much actually made it into his system but don’t feel comfortable re-dosing for fear of an overdose.

But let me swing the pendulum from negative to positive and remind myself that Malachi hasn’t been sick since his tonsils and adenoids were removed in March! Praise the Lord.

This week was filled with adventure, which is very likely the reason he is struggling with sickness now. Malachi had all of his regular therapies and appointments, but we also took a field trip to the Creative Discovery Museum in Chattanooga. It is a museum designed specifically to be interactive for children. We armed ourselves with hand sanitizer and braved the germ-filled environment. Malachi really enjoyed the musical exhibits, and I was able to get some cute pictures to share with you!

Malachi also had some big adventure near the end of our week as some of my family members came in town for a visit. We spent our time entertaining the kids (five under the age of 7) and playing cards when the kids went to bed. Malachi was such a trooper and tolerated our late night adventures better than expected…he even took naps allowing both Jake and I to play cards at the same time! But hands down his favorite part of the weekend was being silly with his cousins. Here are some photos and a video of the silliness: 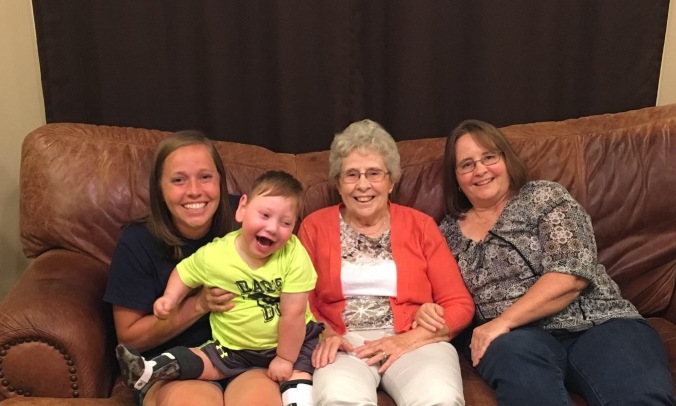 I do have some pretty awesome moments from our week to share! First of all, Malachi slept one random night for 7.5 straight hours…I can’t remember the last time he even came close to this, and it was so refreshing!

Secondly, Malachi was absolutely hilarious this morning during church (yes, we took him…we didn’t see any symptoms so we thought he was safe. So sorry church family). He was listening and clinging to every word the preacher said. Every time he would recognize a word (God, Jesus, love, happy) he would start giggling. He sat with such a look of anticipation on his face. He really liked when he said “God” and would whisper the name to himself each time he heard it. Jake and I have been trying to teach Malachi a prayer that starts out with “God” and he has definitely added that one to his vocabulary.

And finally, we got a letter in the mail this week letting us know his stander has been approved! WOOHOO! This was such a surprise to us and came at just the right time. Earlier this week I talked with insurance about Malachi’s diapers- a process I have been working on for several weeks now. I have spent hours (not overestimating- it has been at least 4 total) on the phone with insurance and medical supply companies trying to get him what he needs. They gave me a list of hoops to jump through, requiring me to get in contact with his neurosurgeon and ask for special letters to be typed, prescriptions, and copies of his medical records. After I completed each hoop they would casually give me another criteria that had to be met and at this point I was too invested to stop now! They called me on Wednesday to tell me that they weren’t sure why no one had told me, but Malachi doesn’t even qualify for diapers until he is 4 years old. The original woman I spoke with had told me 3 years old. So sadly I had spent those hours jumping through hoops for no reason.

I find myself in a world that requires you to put on boxing gloves and fight…even when the opponent is much stronger and much larger than you. So although I lost the match with the diapers, I am finding solace in my victory with his stander!

Jake heads back to work in the morning and Malachi and I will slowly start finding our routine again. It has been so wonderful having him home for the summer.

We could really use your prayers for Malachi to get over his sickness quickly and without complications. We would love to zoom through it without even a doctor visit! I find myself emotionally fragile right now as I don’t know how to help Malachi. There is something so helpless about watching your sick son, not knowing how to relieve the pain.

I have been in a self-pitying phase this weekend as I find myself in situations unique to us. Malachi ended up in bed with us this morning and will only sleep with his face pressed up against mine. As I laid next to him I could feel his eyelids flutter against my cheek and I found myself evaluating whether it was a seizure or simply a dream. It made me wonder about an uncomplicated life where I could simply enjoy the fun curiosities of parenthood…laying with my son and watching him dream. Instead we have to think about where I put his rescue medications and time the eye flutters, praying and hoping it will be a short one.

So this week calls for a re-focus. It calls for a conscious effort on my part to look for the blessings in our life and focus on the good that God has given us. Like providing paper towels to clean up all this vomit (yup- just threw up again) haha! But truthfully, sometimes in life you just have to decide to put your blinders to the chaos and create your own scavenger hunt for the good in life.

I wish I had the time to write a devotional for this entry, but unfortunately mom duty calls! Thank you for checking in on Mr. Malachi, and we would appreciate your prayers this week.