**Author’s Note: We have been keeping a blog on Malachi since his first week of life on http://www.caringbridge.com/visit/malachicarroll . Unfortunately they are changing their privacy policy and are requiring that you create a username and password to view the blog. We are seeing this as an opportunity to go a different route, and this is the first entry on Malachi’s very own webpage. Feel free to visit the old site, as it will remain active but all new posts will be made here! My primary goal with this page is to keep all who are interested informed on the miracles that are happening daily in Malachi’s life. Some of my entries may bore you to tears while others may contain serious health updates. Our hope is that by sharing pieces of our lives with you, that you in turn will commit to praying daily for Malachi. Thank you!** 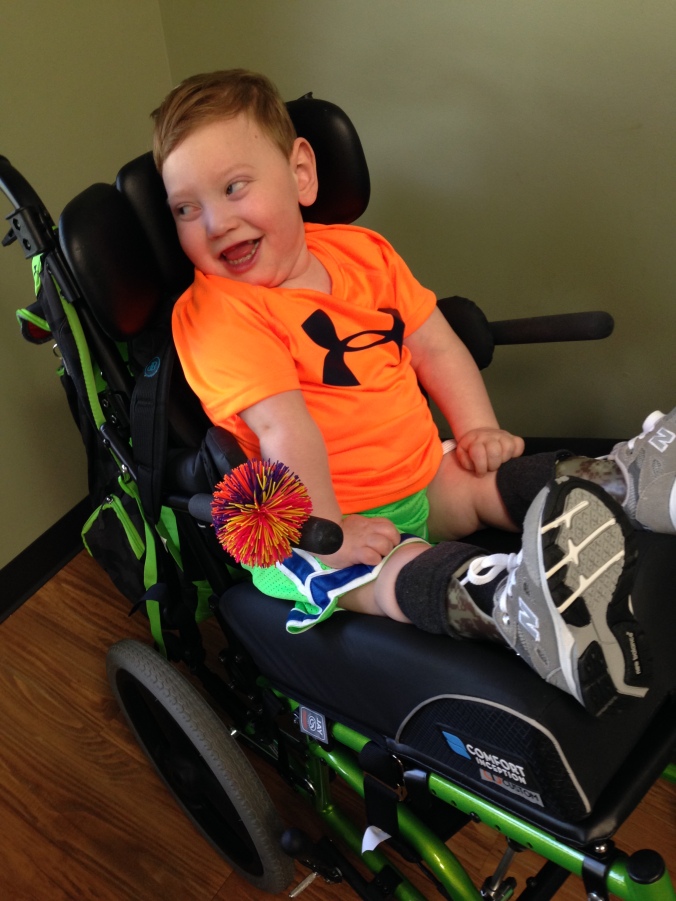 This week we have been searching high and low to try and find our new “normal”. Our doctor appointment schedule slowed down a bit allowing us to take a deep breath and focus on simply enjoying our son. Malachi and I took long walks throughout the week, stopping to visit the dogs, cows, and horses along the way. We played in the grass and read silly books, and chased the dogs around the house. We started family game nights, where we realized that Malachi can play a wicked mean game of Yahtzee. He even managed to beat his daddy!

This week I caught a glimpse of the mother I always wanted to be. Fun, carefree, and raising solid members of society.

Being a special needs mother is so difficult physically, mentally, and emotionally. I am Malachi’s voice, I am Malachi’s body, and I am Malachi’s caregiver…not to mention all of the other roles I find myself fulfilling throughout any given day. But God equips the ones He calls, and He has done just that in my life.

Matthew 6:25 “So don’t worry about tomorrow, for tomorrow will bring its own worries. Today’s trouble is enough for today.”

Worry is turning into a daily battle for me. As I watch my son grow into a chubby little toddler my mind wanders to the day I will no longer be able to carry him to his bed. Or easily lift him up and lean him forward when he is having a seizure so he won’t choke on his vomit. How will I shave Malachi’s mustache when he is a teenager? How will I burp him when he no longer can sit on my lap? I have to chase off these worrisome thoughts every. single. hour. The devil is good at his job. I find myself continually reciting this verse and reminding myself that worry is a sin. Worry tears us away from God and is the opposite of the faith marathon that God is asking us to run.

So to combat my constant desire to worry I have had to make the conscious effort to tackle each worry and find a solution for the here-and-now to focus on. This week’s task was getting Malachi to eat food from a spoon and drink from a sippy cup. Typical three year olds have mastered this process, and by golly so will my Malachi! At this point, Malachi is strictly bottle fed with a shake that contains a nutritional (aka extremely fattening) soy based drink and we mix in a pack of baby food fruits and vegetables.

After his tonsils and adenoids were removed last month we have seen Malachi’s appetite take off in such a positive direction. He is eating like a champion and the extra calories have caused us to worry about him taking in too many calories, for once. We are trying to find a way to replace some of the extra bottles he is taking with spoon feeds and thinner fluids. I wish I could reenact his face when he had his first taste of apple juice. He started swinging his arms like a madman trying to find the source of the good stuff. He has allowed me to squirt in some thinner liquids several times this week, so tiny steps of progress have been made. We have learned that being too ambitious with the juice will cause him to vomit, so baby steps it is.  As for the spoon feedings, he is doing wonderfully!

We are also working with Malachi on being more vocal for his wants and needs. His vocabulary continues to expand and his speech is getting more comprehensible. He has mastered “Dad” and will call for Jake anytime he leaves the room. As much as I would love for him to be shouting my name that way, it really is heartwarming to see the love he has for his dad. His second favorite word is “Gunner”, the name of one of our dogs. She is very responsive and will come when he calls and Malachi is all about cause and effect. He will call “Mama” but only when dad makes him angry or sad. And of course, I come running!

Malachi’s little brain has suffered severe damage and the effects of that damage are something we face daily in a variety of ways. First of all, we are continually monitoring his VP shunt for malfunctions. It regulates the flow of cerebral spinal fluid in his ventricles. We also deal daily with epilepsy, which has been improving this week with his frequency of seizures! He is still having around 4 a day but they are so much less severe.

There are some lesser known effects of brain injury that we deal with, and one of them is temperature regulation. Malachi’s body has a hard time communicating what temperature it should be at. Our first thought when this happens is sickness, but when no other signs or symptoms appear we know it is simply a brain communication issue. Malachi is a TERRIBLE sick child and will let us know a day in advance is something new is brewing in his body. Yesterday we took him outside to sit at a soccer game. He sat in the shade but his temperature was affected by the heat of the day and he was reading 100.7 last night. After a few hours we were able to bring it down, but it continued to drop all the way to 96 degrees. So we have to find ways to bring it back up but not too much.

Another common issue with children that have brain injuries is sleep cycles. Malachi’s brain is constantly misfiring according to his EEGs and it interferes with his sleep in huge ways. For example, one day this week he stayed up until 5am and functioned on just 3 hours of sleep. Another day this week he slept in 1.5 hour chunks, waking for 2 hours in between each sleep session. And Friday night he slept for 6 hours straight and took a 2 hour nap shortly after waking (I was SOOO EXCITED!) Like the proverbial box of chocolates “You never know what you are going to get.” Here he is, wide awake at 4am. 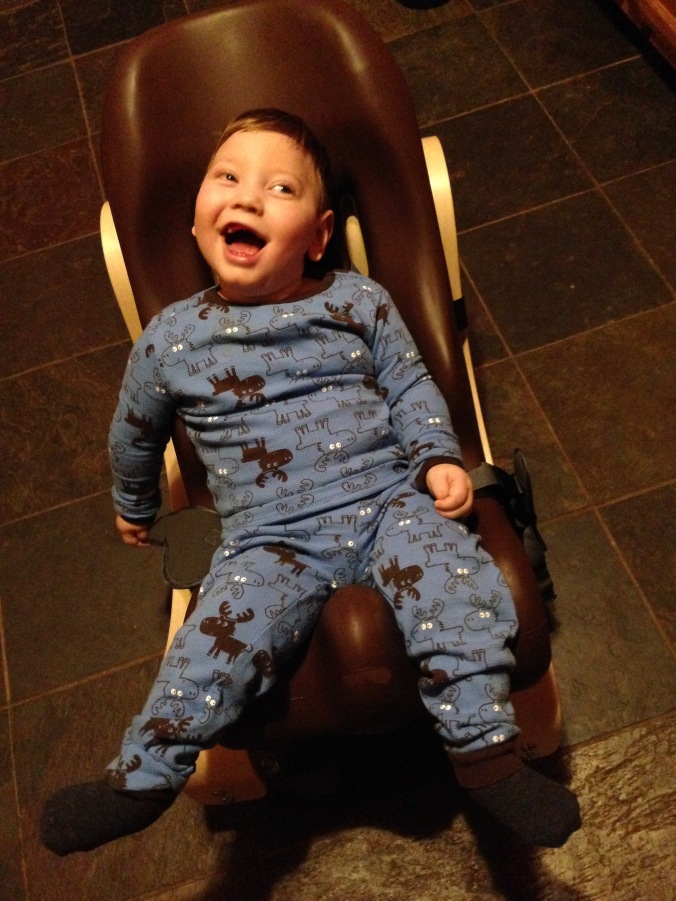 Malachi visited the dentist this week to discuss his upcoming dental work. Premature babies often don’t have enough time in the womb to develop enamel (called hypoplasia) and Malachi’s teeth are filled with issues. As you may remember, the top 4 were removed last year because they were cracking and chipping with a simple teeth grind. Now his molars are covered in cavities and need to be filled and capped. Normally this can be done under sedation but with Malachi’s medical history he has to go under general anesthesia in an operating room to have the work done. We have scheduled the procedure for early June. Until then we will continue to brush his teeth and say our prayers. If the molars become abscessed before we can fill and cap them, they will have to be removed instead of simply covering them.

So this is where you come in. We are in constant need of prayer. While we like to whistle through our day and smile because everything seems “normal”, we still have to keep in mind that Malachi is a medically fragile child. We are extremely vigilant with his needs, but one mistake of us turning our backs on him for a few minutes can have devastating effects. Jake and I need prayers for wisdom in making decisions for Malachi’s health and we also need prayers for physical strength to care for such a precious gift. We also ask that you petition God with us for miracles for Malachi. There are so many different parts of his body that need a supernatural healing. His hips are high up on the priority list as both of them are out of the socket requiring a major intensive surgery in upcoming years. Join us in praying that this surgery can be avoided and we will be able to witness Malachi take his first independent steps one day.

Thank you for taking the time to check in on our boy.

3 thoughts on “Searching For Our Normal”