This week we made the trip down to Chattanooga for appointments in the cerebral palsy clinic. The boys share several specialists, and thankfully this was one of those doubled up days.

The hospital building the specialists are in was eerily empty, which I was thrilled with. They did temperature checks on the way in and only spent two minutes in the waiting area before we were taken back to a room. Everyone was masked up and extra cautious. 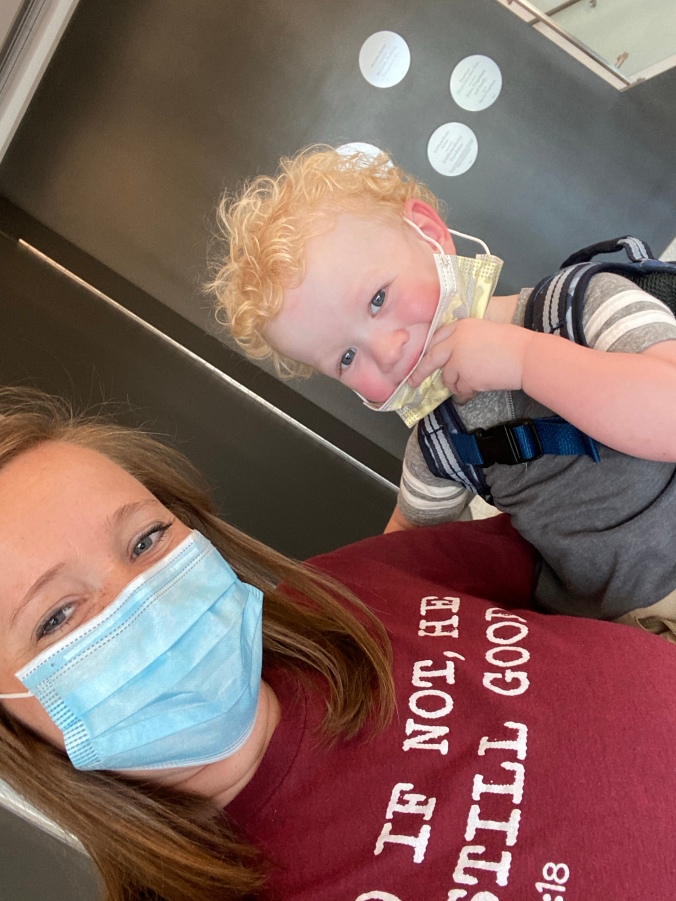 The CP clinic measures each of the boys spasticity so we can watch and intervene as needed. They also help with orders for equipment and new orthotics for the boys. When and if Malachi ever needs botox injections in his tight muscles they would handle setting up those procedures as well. Botox works very well for children with specified areas of tightness but Malachi’s is all over so it makes him a poor candidate.

Levi has hypotonic CP (low tone) so he is very bendy and floppy. They were very surprised at how well he was walking and running since he runs on the inside of his feet. 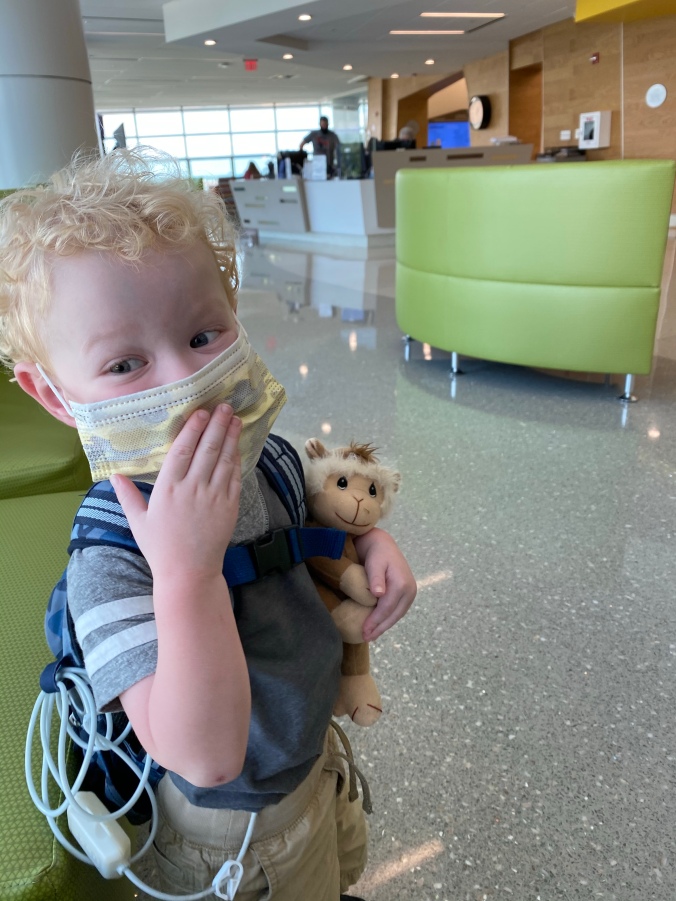 Malachi has hypertonic CP (high tone) in his lower extremities and hypotonic CP in his core so he is classified as mixed CP. While they were checking his range of motion they pushed a little too hard on his very tight knee and he signed no, but they didn’t recognize the sign and continued to push him. As soon as I saw his no face I told her to stop but it was too late and he burst into tears. It took a bit for us to calm him back down, and he was very distrustful of her for the remainder of the appointment.

The boys have been running me ragged this week. I was hoping to have found a groove by now with their sleep schedule but somehow we are more wonky than before. The night before our CP appointment Levi stayed up until 4am and Malachi woke up at 7.

Last Sunday night I hit “post” on the blog entry and found that Levi had opened the Clorox wipes and put one in his mouth. I jumped up and snatched it before he could run and on my way down my finger caught his tummy tube and plucked it right out. OOPS! I was able to get a new one in quickly but emotions ran high for both he and I throughout the process so we stayed up until the early morning hours.

They love snuggling together at bedtime. Once I get Levi asleep I can transition him into his bed, and this week he has done better about staying in it most of the night. And Malachi and I have been working on our ninja skills to sneak out of the room when Malachi wakes up each morning. 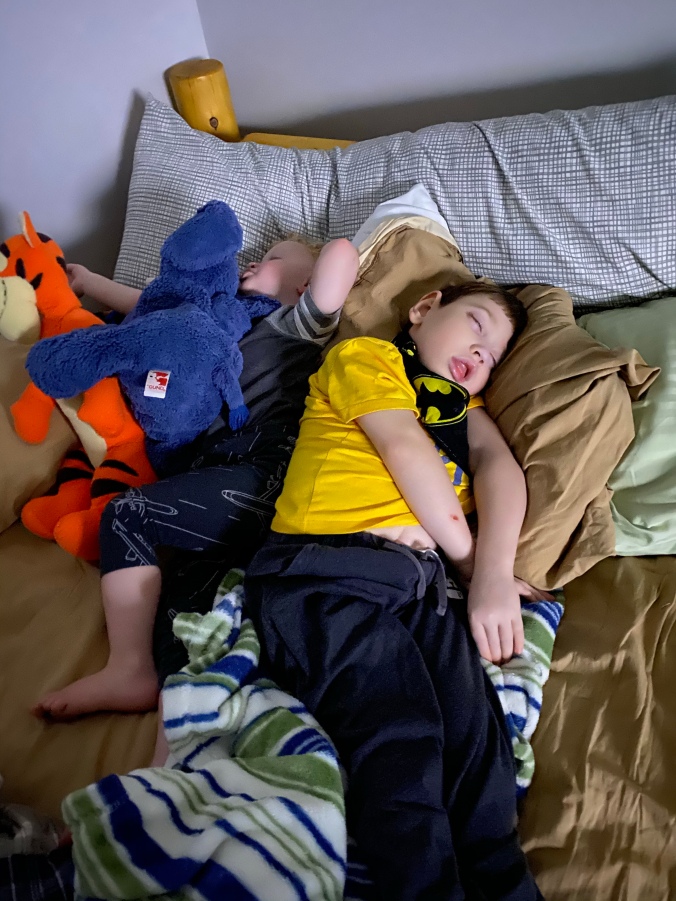 Our evenings have been packed full of events. We are still keeping the boys tucked in away from crowds as much as we can, so we figured hosting things in the driveway was the easiest way to manage our kids and our extra-curricular things. We open the basement door up so there is access to a bathroom and keep the teens in the driveway/hot tub area.

On Tuesday we hosted a movie, hot tub, and pizza/smores night for the girl’s soccer team. Jake stayed in the house with our boys and I spent time with the girls outside from a distance.

Friday night we set up the giant movie screen at the church and held a community drive-in theater for an outreach event. My mom sat with the boys at the house so Jake and I could both be involved. We prayed over each family that came out and served dinner and snacks. This was our first trial run and we had over 50 cars come out (for our small town that is a lot)! We also sent home a family Bible study with each car to try to get them to plug into God’s word.

Tonight we had the youth group come out to our house for driveway Bible study. We are trying to find safe ways to continue our ministries and tonight went wonderfully. We had about 35 teens show up and we were able to keep everyone relatively spread out in our front yard area. These plans may have to change if the virus continues to spread in our small town.

Jake is taking extra precautions, which means he showers three times each day (after any encounter in public) and goes through four outfits. My laundry has quadrupled this week! 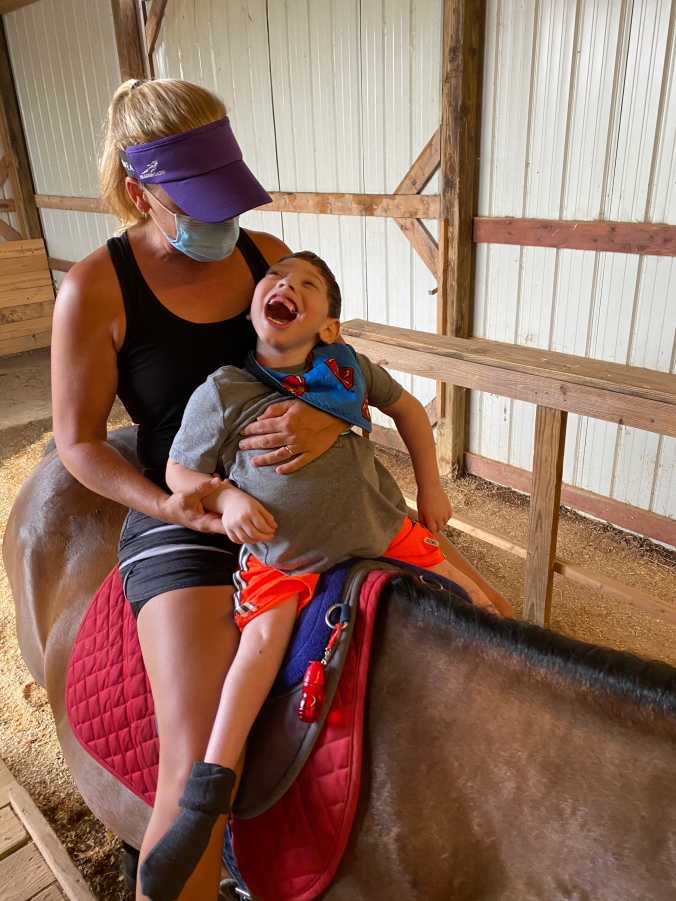 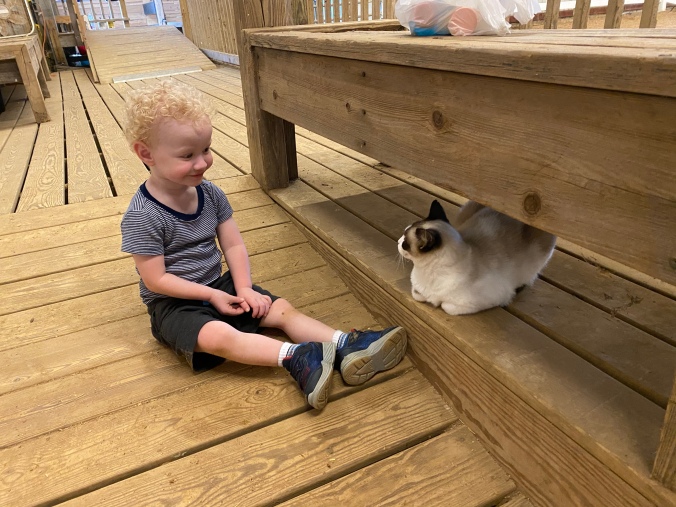 As we prepare for Levi’s Cincinnati surgery in two weeks, I am forced back into special needs land. Sometimes I can convince myself that our life is not that different than everyone else’s; and while I know that it is a lie, my heart let’s me fully believe it.

Thinking through logistics of traveling for surgery is complicated. Not to mention thinking through the things needed for Jake to succeed alone with Malachi in Tennessee while we Levi and I are gone. They will need to keep the van for the wheelchair , which means I will need to make sure our other car is safe enough to make the trip. I will have to dig out oxygen tanks and regulators again, as he needed those post op for a few hours last surgery.

The hidden side of special needs parenting that you probably don’t have a reason to know about is the massive amounts of insurance paperwork we deal with. For example, we got a letter in the mail this week from insurance saying that Levi’s upcoming surgery would not be covered by his secondary insurance. They said that there is someone in network at Vanderbilt that could do the surgery and traveling to Cincinnati was unnecessary and therefore not covered. I will work on the appeal this week to try to help them understand the experimental nature of his initial procedure and how important it is to be followed by the same specialists that performed it.

Total side note, here is a photo of this week’s progress on the therapy pool. We are getting closer and closer to our roof!

In all honesty, I am burned out right now. We are back to so many plates swirling in the air and paired with a lack of sleep, my days all merge into one incredibly long one. We find ourselves frequently evaluating if there is something God is calling us to get rid of.

I know He has a plan in all of it, but boy am I exhausted! The easiest one our minds constantly ask God about eliminating is our role as soccer coaches. Since we aren’t able to talk directly about God with the girls, there is more of a challenge in that role to make an impact for the kingdom of God. Not to mention how time consuming it is year round. But every time we ask God, he is very clear that we are to continue…8 years later here we still are.

This week we invited the middle school soccer team to come and practice with the high school team. We thought it would be a good opportunity for our high school girls to teach some younger players. We ended up with 44 players on the field and had a great practice. At the end we circled all the players up (6 feet apart of course) and asked the girls if anyone had a “call out”, something we do at the end of every practice or game. We give the girls an opportunity to compliment a teammate on something they did that caught their eye. We do this for several reasons, but the main one is that we are trying to teach the girls how to build up instead of tear down. The way of the world is to compare and tear down, but the way of Christ is to speak life into situations and people.

Immediately the hands of the high schoolers shot up all over our circle. We watched as high school players spoke life into the middle school players. Watching their innocent little faces light up as each one received a compliment literally brought Jake to tears. Those compliments are words those young ladies will never forget.

Sometimes we are called to things that don’t make sense, like coaching soccer when life is bonkers. But sometimes those callings are deeper than what we realize. Without overtly speaking about Christ to these players God has used Jake and I to successfully create at atmosphere that reflects God. We have created a culture with those girls to focus on the praiseworthy and regard others as better than yourself. We have been able to create value and worth in a demographic that the world steals those very things from.

Jake and I may never get to see the sprouts from the seeds God has been calling us to plant. But it isn’t always our job to harvest….sometimes we are simply called to plant and water.

We are called to a life of obedience, not results. It is our faithful steps up the staircase that bring Him joy.

I know that really isn’t a good devotional, but I am hoping that it may encourage you in whatever odd task God has called you to.

Alright, it is officially midnight and one boy is asleep and the other is close….that’s my cue!

May God bless you this week,

4 thoughts on “Called Out”