It’s officially June y’all! This week we have medical tests for Levi and a Nashville hospital trip for Malachi, both of which are weighing heavily on my mind.

We don’t expect to hear bad news from either one, but cautiousness still lingers in my heart. Malachi will be seeing his orthopedic surgeon to talk about his hips, knees, feet, and spine. We know that a possible hip surgery is in the future for Malachi as both hips are completely out of socket, but we would love to prolong it as long as possible. The recovery from a massive surgery like this one is so physically taxing on his body. For those of you who are medical nerds like me, the formal name of the surgery is double femoral osteotomy where they completely saw off the head of the femur that is out of socket. Very painful! 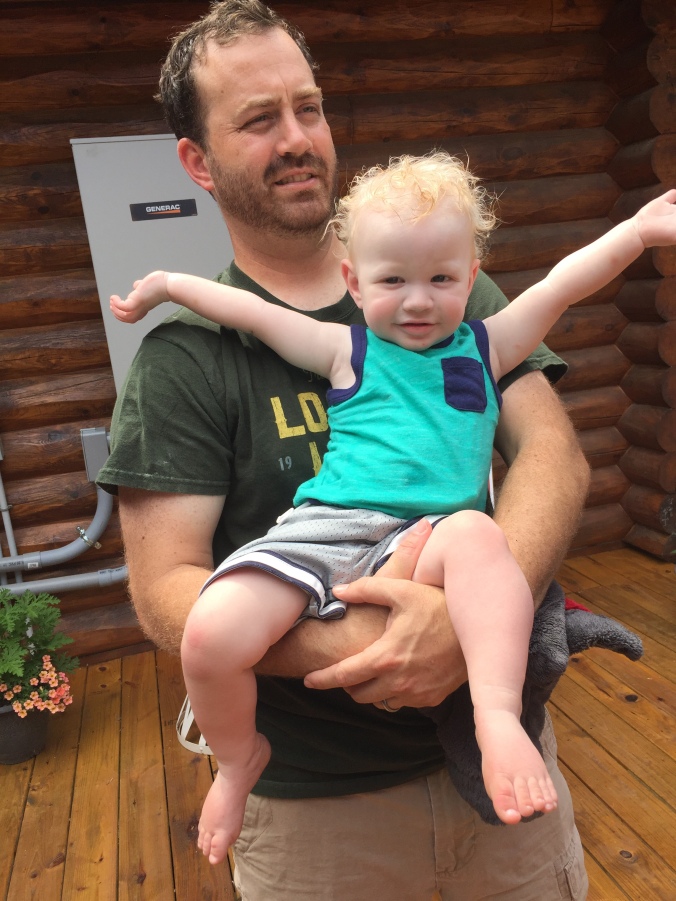 Levi and daddy watching Malachi at his swimming therapy.

Levi will be attempting a swallow study, so I undoubtedly will have a funny story to share with you about that one next week. I can’t imagine it going well from a behavioral standpoint. 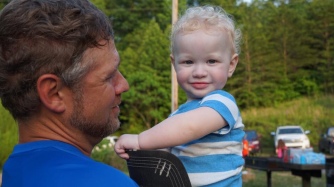 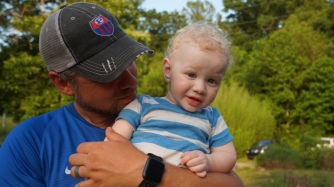 Levi and his best buddy Tanner.

Last night Levi’s pulse ox was reading his heart rate a bit higher than his norm. Usually this means something is agitating him or he is running a fever so I watched him closely throughout the night. Around 3am he woke up screaming so we headed to the living room for an all nighter. He was hitting all the markers of having an ear infection so when Jake and Malachi woke up we headed out, dropping Jake and Malachi at church and Levi and mom headed to the doctor.

Our pediatrician doesn’t have Sunday hours, and inevitably Levi always develops an ear infection on Saturday night. We had a very difficult time finding walk in clinics that would see a medically complex child like him, even for something as simple as an ear infection. Now that he is off his daytime oxygen I thought we may be able to get away with it! We successfully made it to a room in one and as the nurse left to get the doctor she casually said “By the way, I forgot to ask if he has had any surgeries in the past?” I pulled out a copy of  his medical summary and her eyes grew wide. But after 20 more minutes of the doctor pouring over his medical diagnoses and asking lots of questions, he confirmed the ear infection and sent a script for an antibiotic.

Levi has been acting off most of the day today and took a 5 hour nap this afternoon. We will likely have another long night but hopefully by this time tomorrow he will be back to his silly self. 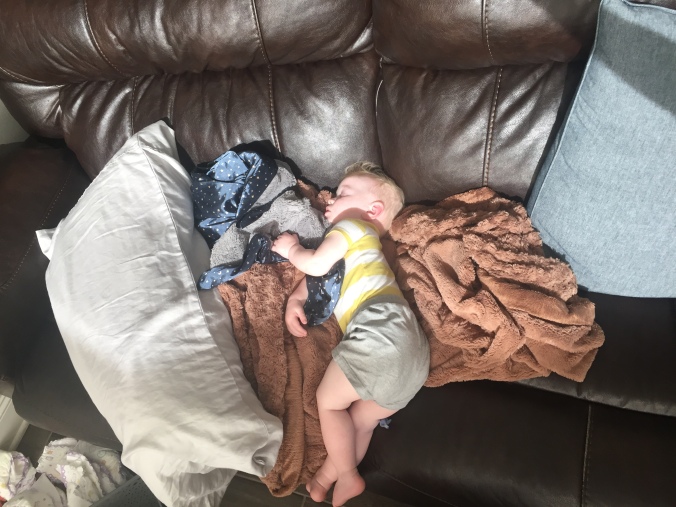 Malachi has had an amazing week. He started his summer swim therapy sessions and got to ride his horse on his belly like a superhero. 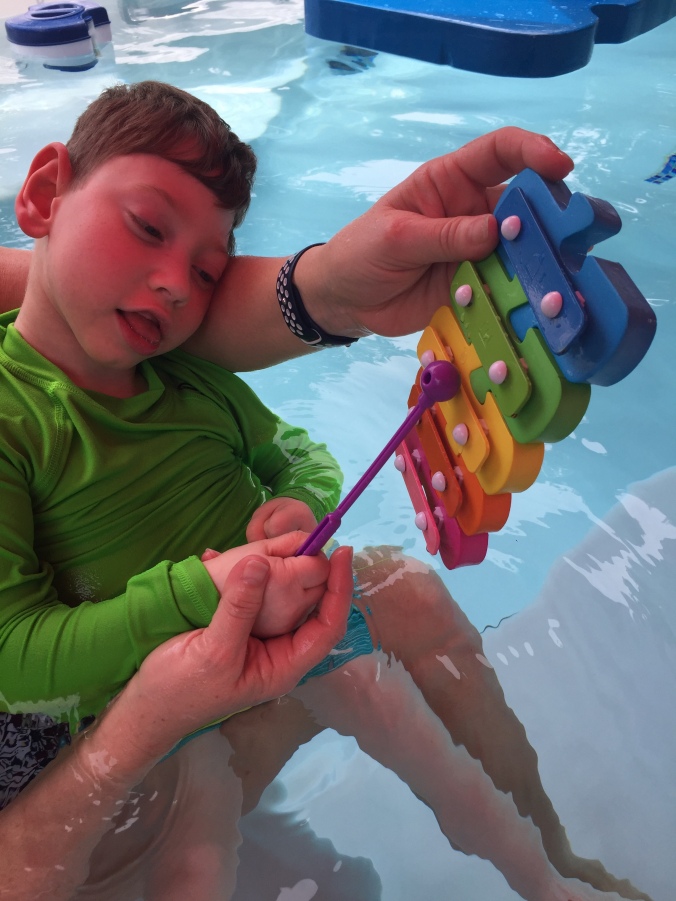 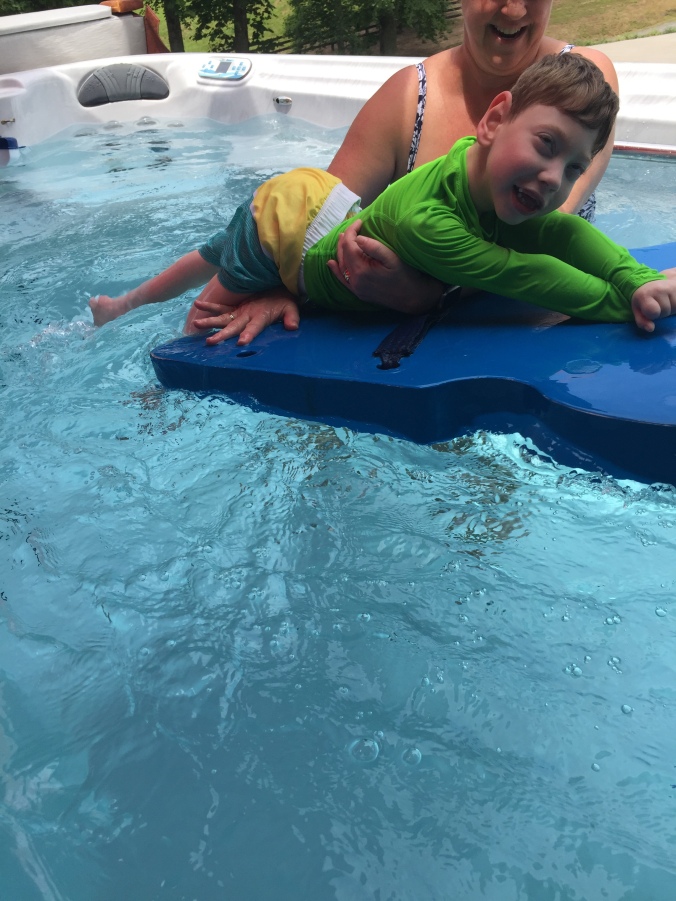 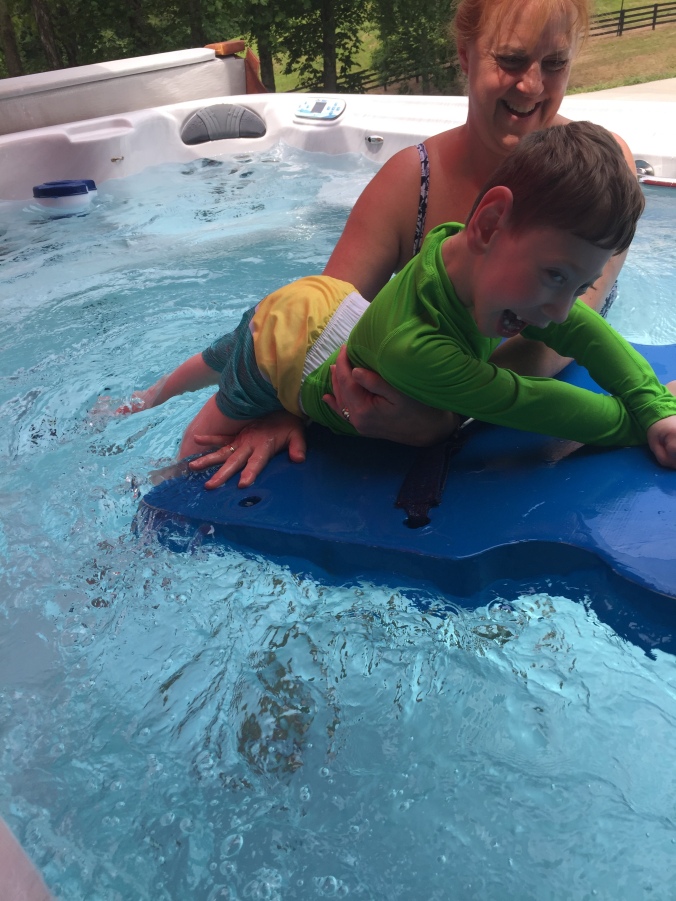 The biggest highlight (the thing he gets the most excited to talk about) was that he scored a goal in his soccer game. Malachi is strangely competitive which is so intriguing to me. At his last soccer game the final whistle blew and he burst out crying. I thought he was in pain or something was wrong so I started asking him what was making him cry. As I went through the list he indicated that he was sad about the game. I continued to ask him questions and it took all of 30 seconds for him to narrow it down to being sad about not scoring a goal. I told him how well he passed the ball to his friends in the game, but passing the ball doesn’t make everyone cheer like a goal does.

Here is a cute photo of Malachi and his buddy Lincoln. These two were in the NICU at the same time, although our paths didn’t cross again until recently. 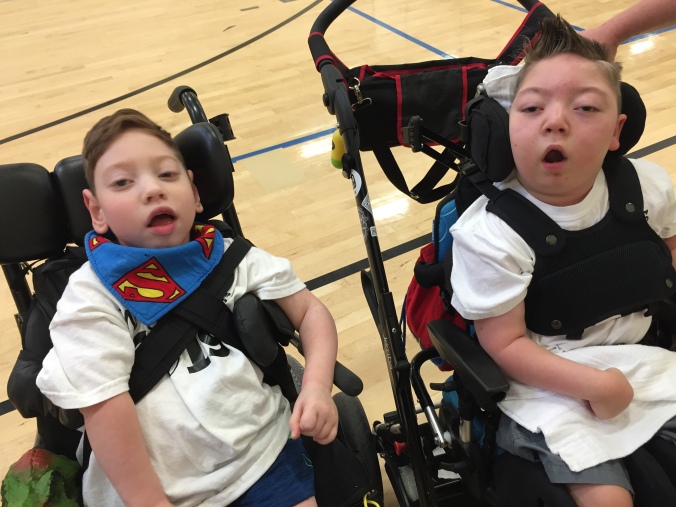 We walking in on Saturday and found out that one of Malachi’s school buddies and his family had come to cheer him on. Malachi was all smiles when we told him they were there to watch him. I told him to show me his game face and he got super serious. 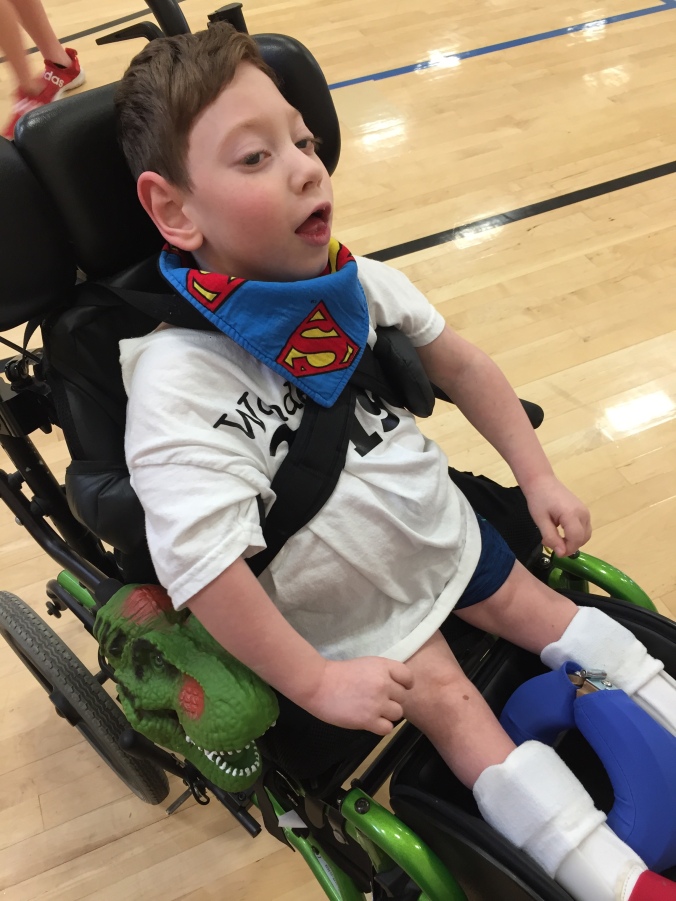 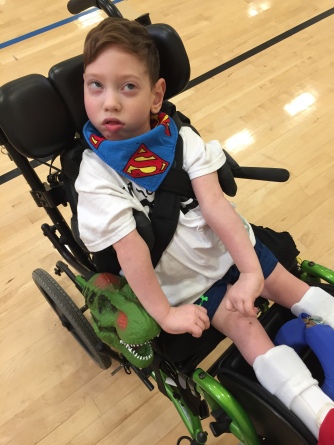 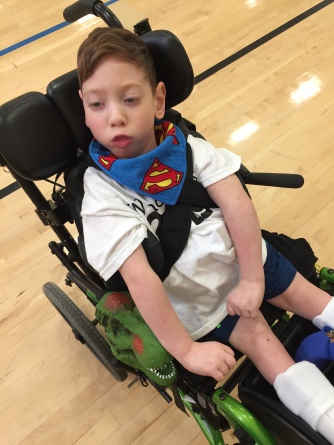 This time around we tried to put one in the net and he finally knocked one in! He was giggles and excitement as the crowd erupted into cheers for him. He laughed the rest of the game and we made it our priority to help our friends score some goals. He even got a few more headers this game!

Here is a video from the game to give you a visual of how it all works. We didn’t get his goal on film but he got close to scoring.

Jake and I planned a big youth group summer kick-off party and it was a blast! We spent longer than I care to admit filling chunks of panty hose with color powder but it was definitely worth it to see how much fun the teens had. 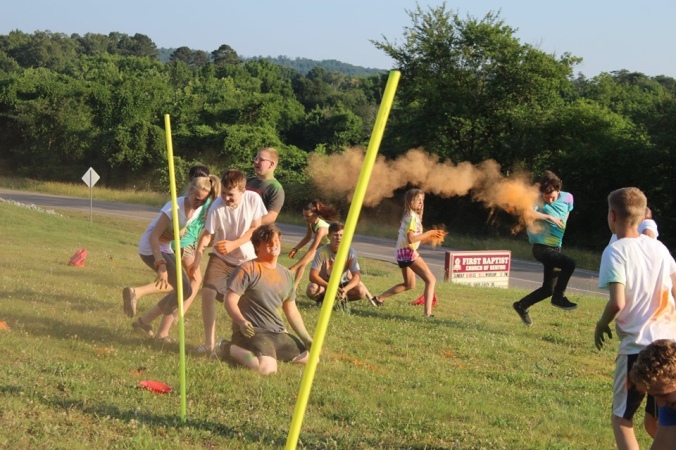 I claimed the role as photographer so I made it out relatively unscathed. But Jake on the other hand is still green. 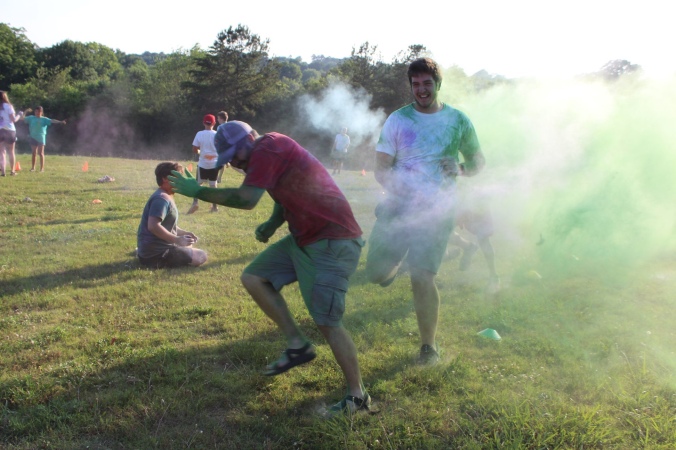 On Friday afternoon we met up with the Robotics team teacher that adapted Malachi’s Wild Raptor ride on car. If you are new to the blog, the local robotics team re-wired a Power Wheels toy so that Jake and I can control it from a remote. Malachi absolutely loves his “Wild Raptor” and we are s grateful the team was willing to create such a special toy for him.

This particular teacher has a big heart and after completing the project for Malachi he has decided to create the same opportunity for other special needs children with unique needs. He is creating a project called “The Malachi Movement” to link up special needs families around the country with a willing robotics team close to them. They can submit their information and he will link the two parties and give them the tutorials needed to complete the job. He has also created a way for people to donate parts and even the car itself to the program for families that can’t afford to purchase the pieces required for the adaptations. I will try to get some more information out to you in case anyone is interested in helping financially.

Malachi rode his raptor this week with his cousin. They had a blast playing with the dinosaur head from it too:

This week I have been really challenged by the idea that we are to bring glory to God in every aspect of our lives.  When I realistically look at my days I find moments that I feel sure bring glory to God, but there are more moments that either a) aren’t necessarily “bad” but don’t glorify Him or b) do the complete opposite of bringing Him glory.

I have shared with you before that I continue to struggle with anger and resentment over things that are not in my control…which is pretty much motherhood summed up for me. There are so many missed opportunities for me to reflect Christ to my own children, and instead I choose to be angry. There are moments with Jake that I can reflect the servant’s heart of Christ but instead I choose selfishness.

There are so many moments when I am dealing with the medical community that I do not reflect Christ to others. There are moments I am ashamed of. Moments that are birthed from my frustrations and expectations.

There are moments of anonymity, when I am in environments where people don’t know I am a Christian, and I use that as an opportunity to act in a way that is contrary to the nature of Christ. That is so shameful to admit but something that our earthly minds convince us is okay to do every now and then.

But what I keep choosing to ignore is that God has given me a new heart. Not a new attitude, not a new disposition, but a new heart. A heart that is made like His.

Ephesians 4:24 “And to put on the new self, created to be like God in true righteousness and holiness.”

This week God has been challenging me to allow His Spirit to reflect from me in all situations, not just the easy ones. Doing that does not come naturally to any of us, even after God has transformed our hearts.

Living a life with God isn’t a one-time, check it off the list decision. It is a daily, hourly, second-by-second one that we have to choose again and again and again.

My prayer this week is that God is able to consume those selfish tendencies in my heart. I pray that He gives me the desire to be that mirror God calls us to be, and He continues to use me to reflect His beautiful nature to others.

Please be in prayer over our family this week as we tackle some big appointments!