It is always incredibly nice to sit down to write the blog and not have immediate things come to mind to write about. We absolutely love boring, calm weeks!

Malachi’s body temperature has been stable all week so we tried adding a little adventure in our week. On Tuesday we met some friends at the river for a fun day, something that was very much out of Jake’s comfort zone with Malachi. Jake is an EXCELLENT father and loves Malachi so much. Sometimes his fear of the unknown limits the amount of new things he will try with Malachi. When Jake is working, Malachi and I go on all sorts of adventures that we know would absolutely stress dad out, and we take lots of pictures to show him later. When Jake looks at the pictures it gives him confidence to re-do that adventure with him, worry free. Now that Jake is home for the summer he is able to accompany Malachi and I on our first-time adventures, which stresses him out to the max!

Things were pretty tense Tuesday as we ventured down dirt back roads towards the river. I kept speaking confidence into the moment, talking about how much fun we were all going to have. Peeking out of the corner of my eye at Jake, I could tell that he wasn’t so sure.

When we plan for adventures with Malachi we have to really think through the logistics. Malachi is too heavy for me to carry unassisted, so I rely on his wheelchair and a baby carrier that he has definitely outgrown but will get him from here to there for short trips. So the first thing we have to assess is how wheelchair friendly the environment will be. We love living in the country, but unfortunately it is not so wheelchair friendly.

The next biggie that we have to assess is temperature and access to shade. Malachi overheats relatively easily and discomfort sparks his seizures. We also have to have access to a chair of some sort to be able to feed and burp Malachi. We keep a pop-up tent and some camp chairs in our cars to be ready for any scenario.

So as Tuesday’s adventure continued I smiled wildly at Jake, doing my best to reassure him, but also being silently realistic in thinking this may not work as easily as I had hoped. And let me tell you, it worked out better than we could have imagined!

Malachi was giddy at the river and sat in the shallow section with Jake and played. There were other children there and he giggled uncontrollably at their noises and cries. After several hours playing in the chilly water we packed up to go and I was thrilled to hear Jake say “That was actually a lot of fun!” Add river playing to our list of approved Malachi activities!

Truthfully every time we go on an adventure like this I get a little sad, wondering how much longer we will be able to do these things with Malachi. At some point he will be too big to carry a quarter of a mile across the river. But it also motivates me to be as busy as we can during these “easier to carry” years and make sure he gets to experience all the adventure that his little body and mind can handle.

And side note to remind you about the amazing community God has placed us in…a friend from our church pulled me aside this week to tell me that he was planning to pour a concrete ramp on his property so Malachi could have access to swim in the river anytime we wanted. Good, truly kindhearted people. God is good.

Malachi had a very productive therapy session this week. We have started overlapping his physical therapy and occupational therapy, making his total therapy session 1.5 hours long. This is incredibly long for such a little guy, but his work ethic has still been pretty great. To Malachi, these sessions are just a fun date with some new friends, and he giggled through pretty much the entire session. Here is a video for you:

Malachi also broke his record for pool time, spending over an hour and a half in the water before we made him get out. He and his three year old cousin spent the time holding hands and swimming together. The rest of our week was spent simply living our life and bringing Malachi along for the ride. Jake and I coach the high school girl’s soccer team and have held open fields on Tuesdays and Thursdays throughout the summer. Malachi has been such a trooper and will sit under a tent canopy listening to his cartoon shows on a portable DVD player. He is as content as can be, letting Jake and I work with the girls close by. NEVER did we imagine that this would be possible with him. It is an amazing transformation from last year.

Malachi also learned a new, silly game this week during a dinner at the local Mexican restaurant! We handed him a tortilla chip and he quickly learned how to break it into pieces. He had us laughing so hard at his antics, so I took a video to share with you:

This week will pick up a bit as he has several appointments: horse therapy, physical therapy, occupational therapy, feeding therapy, chiropractor, and picking up his new leg braces. Ready, set, go!

With today being Father’s Day, I feel like I need to spend some time talking about Jake and what a great dad he is to Malachi. But I also want to talk about how much Malachi loves his dad. Jake left two hours ago, and Malachi is absolutely convinced that he is somewhere in the house hiding from him. He has been yelling “Dadddddddyyyyyy!” since he left. The connection between them is so touching, and I am so grateful to Jake for being such a great father. 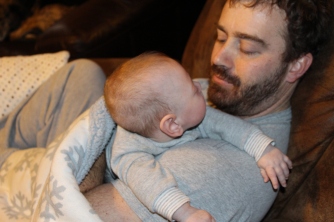 I read an article written by a special needs dad, and it really touched my heart. Here is the link if you have any desire to read it: http://specialneedsparenting.net/because-every-day-is-fathers-day/

This week I have struggled greatly with the suffocating thoughts of life without Malachi. He had an “off” day this week and Jake and I watched him like a hawk , looking for signs of a shunt malfunction. As I stared at his eyes, trying to figure out if they were the “sunset eyes” we have been warned so much about when the intracranial pressure increases, I found myself wondering how our story will end. Will I outlive my son? The heartache in that simple sentence is almost too much to bear. But then when I go the other direction: Will my son outlive me? The same suffocating feelings come. Who will care for him? Who in this world could possibly care for my son as much as Jake and I.

As I sat up at night pondering these questions and thoughts I had to take a deep breath and simply give it to God. There are so many times in my week that I find myself having to stop the ever-turning wheel in my brain and choose to give God those worries and fears. I believe that God is a loving God, and whatever route he chooses for our lives, He will always hold our future firmly in His hands.

I am continuing to trust in God’s providence, knowing that if He chooses to bring me home before my son, He will direct Malachi’s future into the hands of a capable earthly solution. Because He loves me. I also choose to believe that if Malachi is called homeward before me, God will share His peace with me. I am choosing to stop the hamster wheel and simply trust my God.

I hope that through Malachi’s story, you are able to get a raw and real view of faith. Being a Christian is not an easy thing, nor does it exempt you from heartache and worldly struggles. But the hope I find in Christ literally keeps me going on a daily basis. Without that hope, I can’t imagine the state of mind I would find myself in.

This song has become Malachi and I’s favorite for the week: https://www.youtube.com/watch?v=iBmwwwiHrOk

May you feel God’s providence in your life this week, and my prayer for you is that you are able to take your burdens and release them to Him. There is so much freedom in that.

One thought on “Good, Good Father”