What a fun and adventurous week we have had! Our days are still very busy, both by necessity and by choice. Malachi loves going places and staying active so I try to make sure each day has some brain stimulation in it.

**Completely random side-note. Last week I realized that I needed to take more pictures of our week for the blog. I may have gone a little picture wild, so please bear with me.**

On Monday Malachi had a very successful hippotherapy session with his horse, Tommy. Jake and I are continually amazed at his ability to control his head so well while riding. 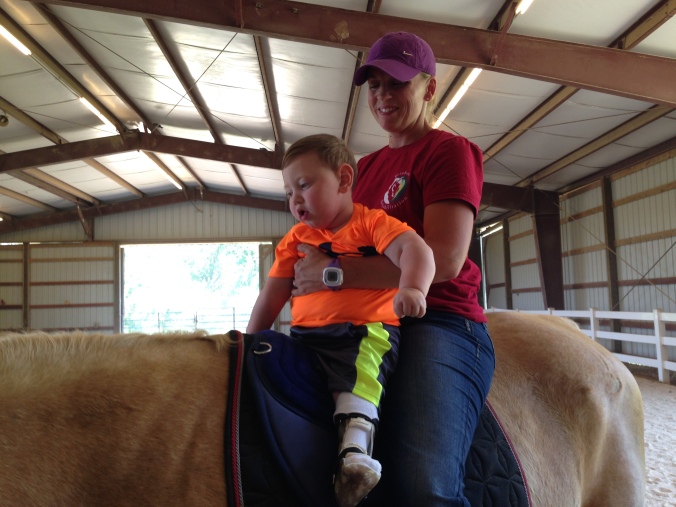 Immediately after his therapy session we headed to the pediatrician for Malachi’s pre-op physical. This is hands down the healthiest that Malachi has ever been before a surgery. In previous visits, I was always anxious about his oxygen saturation, as we never knew what type of breathing day he would have. With his tonsils out I could hold my chin up high knowing he would pull some great numbers on the pulse ox. Overall, things look great for surgery next week. We will be working extra hard this week to keep him healthy.

And this little tubby boy weighed in at nearly 35 pounds!

Tuesday we woke up bright and early for a physical therapy session. During the school year the PT is able to come to our house for the appointment, but now that school has ended she can’t justify a home session. In order to get his therapy we have to take him to their clinic 30 minutes away. Malachi sees these sessions as play dates and loves every minute. The office has a play room with swings and other neat therapy devices that he fully enjoyed.

After his therapy session and some errand running, Malachi and I went on a lunch date! Truthfully, I have only eaten out with Malachi one other time by myself because it is much easier to eat at home or in the car rather than try to get his chair out and about alone. I had seen a Facebook post about the United Way partnering with a local restaurant to help fight child hunger in our area, and I thought it might be fun to support such a good cause. We ran into a college buddy while we were there, and as we talked about the United Way I discovered that they work with Malachi’s neurosurgeon to help families like ours during surgeries and hospital stays. In fact, we have been on the receiving end of their generosity each time Malachi has had a brain surgery, and have received meal vouchers for the cafeteria and even a gas card. What a great organization!

Wednesday was an even busier day as we drove to Chattanooga to fit Malachi for new Ankle-Foot-Orthotics (AFOs). He wears these braces on his legs to keep his ankles and feet from turning out. They are a very expensive shoe at close to $2,000 a pair and he usually needs new ones every 9 months. We managed to use the current ones for over a year, but it was definitely time to get new ones that formed better to his legs. Without a good fit, they can cause blistering and sores. It takes several weeks to make them, as they are completely customized for his legs, but spoiler alert…we went with the same camo print haha. Just couldn’t bring myself to go for anything new.

We left the fitting and went to my sister-in-laws house to try out the pool for the first time this season. And let me tell you, it was the highlight of my week! A few weeks ago I had ordered a special flotation device for Malachi that looks like a horrible torture mechanism. It is a small inner tube float that goes around his neck, with contours for his chin. It is made for children like Malachi and allows them to swim completely unsupported (by mom) in the water, experiencing total freedom for their body. I assumed that Malachi would panic when we first tried it out, and truthfully was skeptical that it would work for him.

I strapped it on and carried him into the water, and the moment I let go that little warrior squealed with joy. He figured out how to dip his head back and get his hair wet, and how to move his arms and splash in the water. HE LOVED IT! The informational pamphlet that came with the float said that most kids can only tolerate 5 minutes for the first try, but Malachi was going strong 25 minutes later, squealing and talking the entire time. I was ecstatic and so proud of him. Needless to say, we will be spending A LOT of time in the pool this summer. I will make it my goal this week to get a video of him swimming to share with you!

Friday was Jake’s first official day off for the summer so we used it wisely and drove to Atlanta to visit my brother for his birthday. He recently had a son, who is one cute and handsome little nugget, and we loved getting to meet him. Malachi was smitten with him and laughed uncontrollably every time he cried. Here is a little snapshot video for you…

Friday was also “Malachi Day”, a made up special day we have to commemorate bringing him home from the NICU in 2013.

Saturday was just as busy, as we met up with Jake’s family for the first half and played in a local river with one of Malachi’s buddies for the afternoon. Everything was great until I spotted a snake headed upstream towards us. Being in the river with Malachi was already out of my comfort zone as he is one heavy little boy. I had him strapped in a baby carrier on my chest, which worked great for our casual entrance into the river. It wasn’t so great as I tried to run quickly out of the river with a 35 pound toddler bouncing all over the place! But it was worth the drama, and seeing Malachi get to do things I never dreamed were possible motivates me to continue trying our best to live life without restrictions as much as possible.

This week I have caught myself noticing older people more than normal. As I see the physical struggles that many of them have to complete simple tasks like walking, I have unknowingly allowed “old age” to be added to my loooong list of worries. I think about Malachi’s needs, and wonder at what age will I no longer be able to physically help him through life. These thoughts knock the breath out of me, and I have to force myself to think about other things for sanity’s sake.

The Bible continually warns us to not be anxious and talks about the effects anxiety can have on our bodies. When I read these verses, I have always been able to see how worry can easily turn into a sin…it keeps our problems out of the hands of God, where they rightly belong. It is safe for me to conclude that nothing good comes from worrying.

But one night this week, a question popped into my mind. “Did Jesus ever worry?” I thought about the scripture that tell us about the night He spent in prayer in the Garden of Gethsemane. How he literally sweat droplets of blood as he prayed. I immediately got out my Bible to explore this thought a little more and read the verse “…he began to be sorrowful and troubled. Then he said to them, ‘My soul is overwhelmed with sorrow to the point of death.’ ” (Matthew 26:37-38)

Now let me stop right there- I am in no way comparing my sorrow to the sorrow Christ had that night, as He knew what was about to take place. But this scripture was so important for me to read, as it helped me understand that sorrow in itself is not a bad thing. It is in our nature to experience feelings of being troubled.

But if you keep reading, you will see what Jesus did with that overwhelming sorrow. “He fell with his face to the ground and prayed.” He took his sorrow to the throne of God. He didn’t let it fester, but instead quickly and readily handed it over the his heavenly Father.

So did Jesus “worry”? My opinion is no, because I see worry as a result of hanging on to a troubled spirit. And yes, I truly see worry as a sin. But to know that his heart was often troubled, just as mine daily is, makes me feel a tad bit better. And seeing his example of immediately releasing that from his soul is a wonderful reminder.

There is a quote from Corrie Ten Boom that I particularly like: “Worry does not empty tomorrow of its sorrow. It empties today of its strength.”

Thank you for taking the time to check in on Malachi. Please keep in mind that I write these entries after I get him to bed on Sunday nights (it is currently 11:30pm) and sometimes my mind loses it’s focus. Literally every time I have posted on here I have re-read it the next day and been appalled by something crazy I said. Odds are I will find something to edit quickly tomorrow, but thank you for your patience!

Please keep Malachi’s procedure at the top of his prayer list this week. He will be having some extensive dental work done under general anesthesia and will be cutting out much of his gum line. We are not looking forward to the pain this will put him in, and seizures are always a huge concern when more pain is added to the mix.

God bless you this week,

4 thoughts on “Busy and Blessed”