In typical Carroll family fashion we managed to cram a whole lot into one week. Let’s start with some high points…

Malachi got to attend school 3 days in a row this week! We base his attendance on the health of his classmates and our crazy appointment calendar. He only goes for 2-3.5 hours but he really loves being there with his friends. They had a themed week so he got to wear his pjs on Pajama Day. He laughed and giggled as I got him ready in his moose pjs and slippers. He has such a sweet and pure spirit and such a sense of humor. 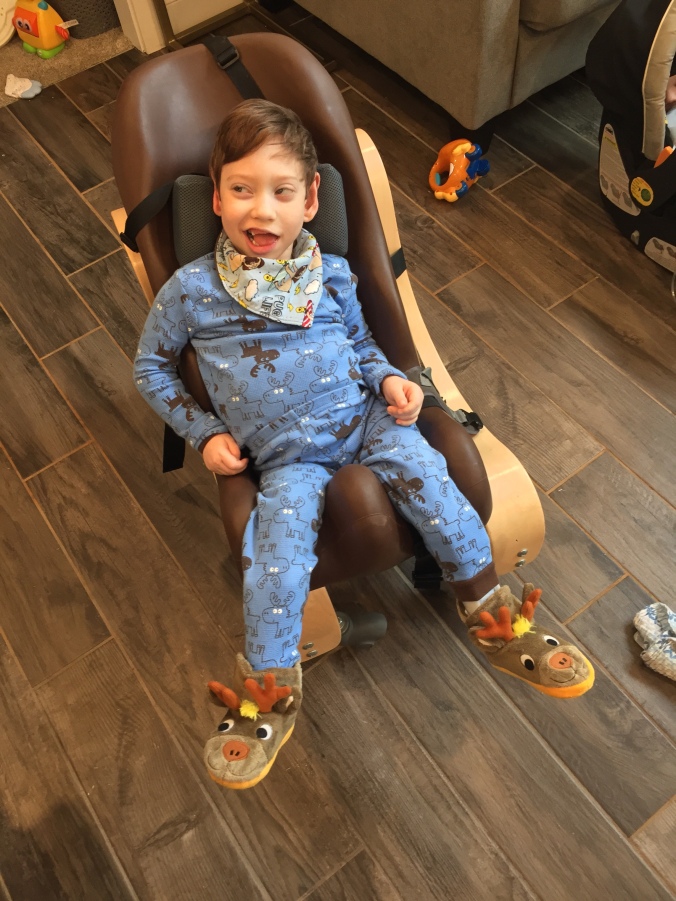 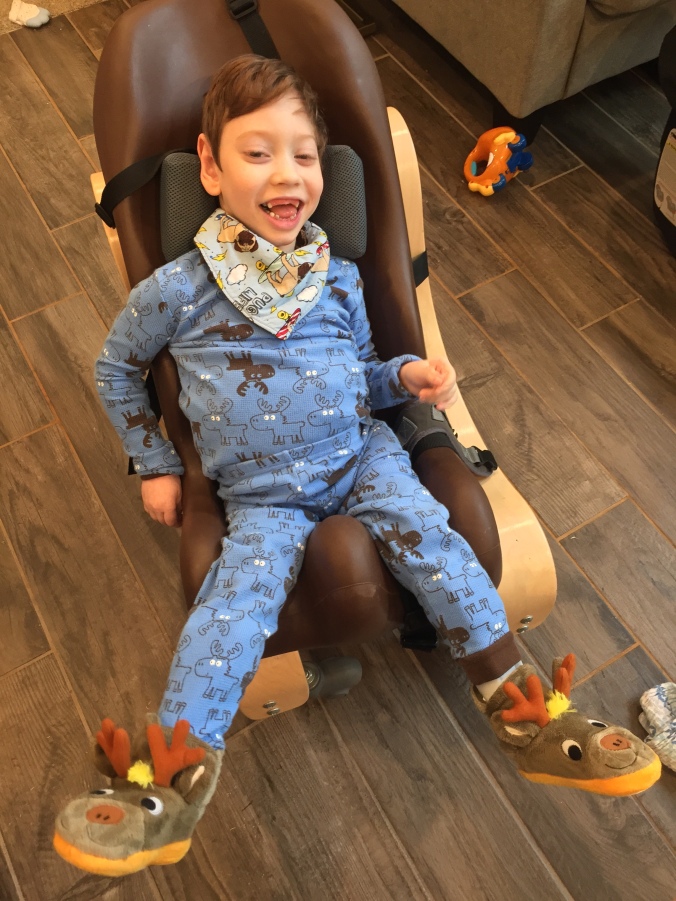 Levi- oh Levi. Never have I met a child like him. 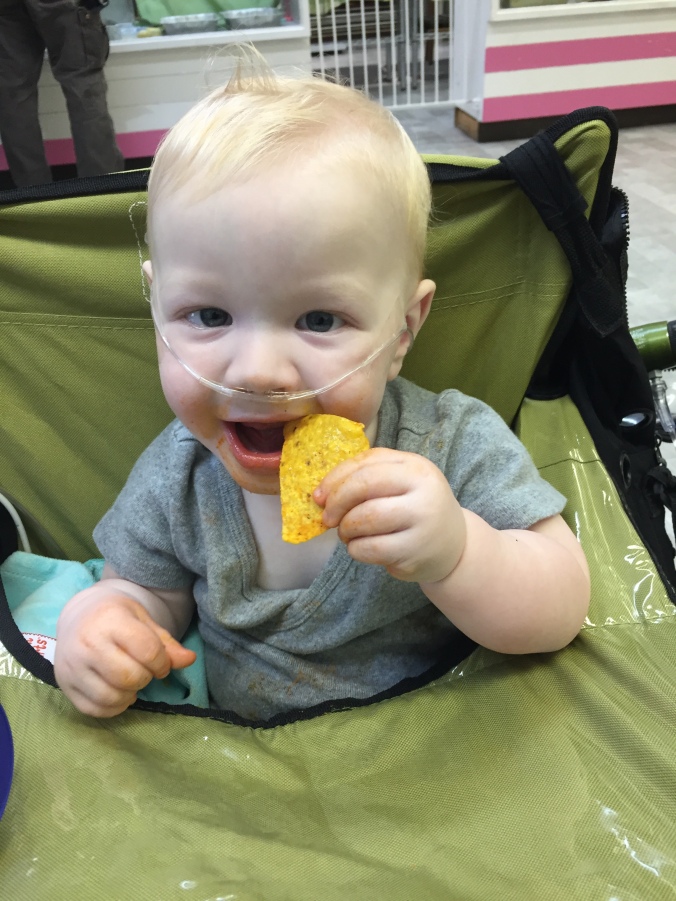 Levi had a wellness check at the doctor this week and flirted shamelessly with himself in the mirror. I caught a little bit on video for you. Note the kisses he is blowing to himself:

I was mortified at one point when he leaned over and licked the mirror before I could stop him! I am thankful there is a separate sick and wellness side at our pediatrician office.

Let’s transition to a low point from the week that happened at our pediatrician appointment. The dreaded milestones checklist. We went through this with Malachi and for some reason it did not affect me as much as it does with Levi. With Malachi we knew there would be delays when he was born so prematurely. We expected to have to check “not yet” on those lists. With Levi we never saw the possibility of developmental delays coming so checking those boxes hurts just a bit more.

Levi is nearly 16 months old and is not crawling yet. He isn’t pulling to stand or attempting to walk. He isn’t doing a whole slew of things he “should” be doing at his age. The interesting thing is that those facts don’t really bother me…but having to give my son a failing grade on a checklist at the doctor really bugs me for some reason.

This week has been filled with those subtle reminders that Levi is significantly delayed. I ordered him a new bath chair that will contain his wiggly self a bit better and the box says to stop using when the child can pull up to stand around the 10 month range. Ouch. 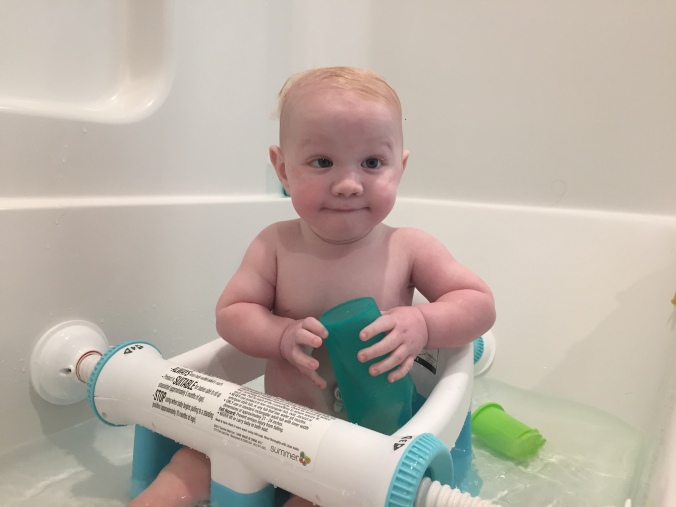 But he is continuing to progress towards those darn milestones that everyone likes to focus on. Just in his own sweet time. 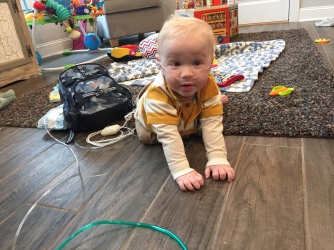 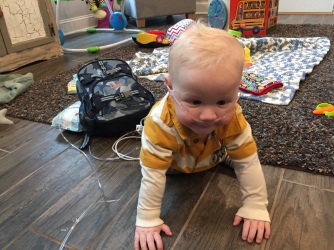 He even started a new crawl this week. I am not quite sure if I can call it that, but I did snap a video to share with you. One of my favorite things about this video is his sheepish little peek around the corner at the beginning to see if I was watching him. He had been going after the hair dryer cord which he knew was off limits:

We transitioned him this weekend to a real crib to help prep him for his sleep study next week. Cord management while he sleeps is stressing me out big time, and this week I had two instances of waking up to find the cords wrapped around his neck. It makes me sick to my stomach just thinking about it. We have tried so many tricks I have lost count. Last night I tried a trick with some velcro zip ties and it seemed to help, but the crib will continue to stay right by momma at night. Probably until he is 21 or he gets married. 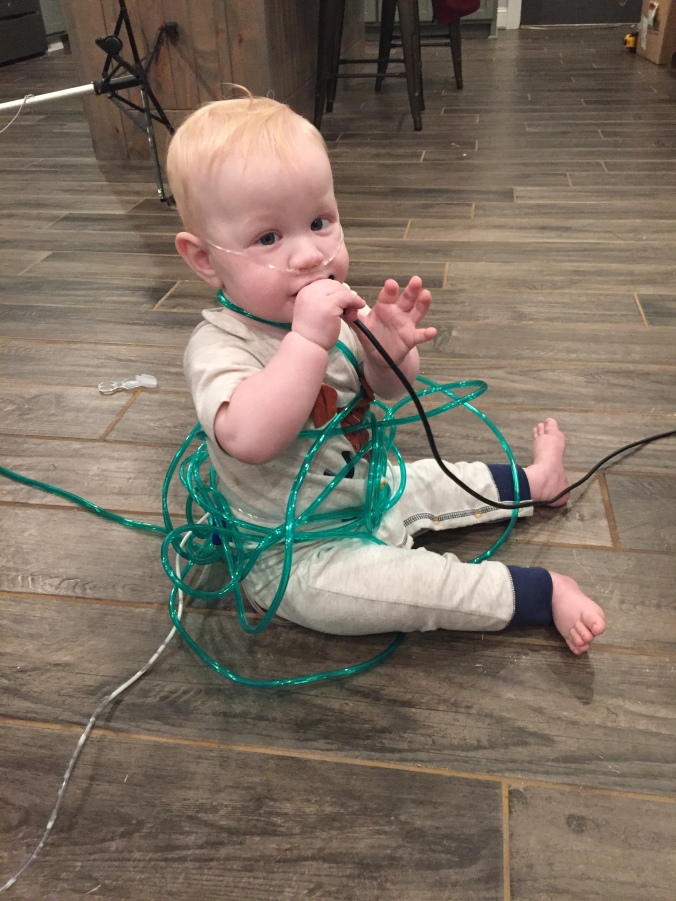 Malachi’s seizures have kicked up a notch this week which has been a little disappointing. They still aren’t up to his former typical 8 a day but the ones he is having are a little stronger than before. We will be watching them closely and calling the doc to check his med levels if they continue to increase.

The boys have some big appointments over the next two weeks and we could use some prayers for smooth days and positive reports.

This week has been a mentally challenging one for me. Every few weeks the exhaustion of being a special needs momma gets exceptionally overwhelming and I am definitely there. I am embarrassed to tell you how many times this week I called in prescriptions or called providers and gave them the wrong kids name or birthday. “Ma’am, we don’t have a patient by that name.” Oops.

This life is mentally, emotionally, and physically draining. Even in the short hours that I get a chance to sleep I am required to be a special needs mom, using my knee to maintain Malachi’s posturing in the bed beside me so he won’t hurt or smother himself. I can’t move from that same position at night. And when I start to complain to myself I immediately feel guilty, reminding myself that Malachi can’t change positions at night either so why should I complain! Sacrificing my comfort for his is something I should feel honored to do.

I have been having lots and lots and lots of PTSD flare ups this week as my mind keeps flashing back to some horrible memories over the last 6 years. I close my eyes at night and see Levi’s face on the Cincinnati NICU video monitor, crying and gasping for air but no one is there to pick him up and comfort him. And I can’t go over there because I am stuck in a Ronald McDonald house with Malachi who isn’t allowed in the unit. Those helpless feelings still grip my heart, even though he is now laying right next to me.

Or hearing that phone ring at 2am in the Chattanooga Ronald house and the doctor telling me to come quick, that Malachi might not make it through the emergency surgery they were getting ready to perform.

Today I drove a stretch of road and flashed back to the drive home with Levi from the NICU for the first time, the muscles in my back melting for the first time in months as they relaxed realizing we were almost home and together again as a family.

This life is filled with ups and downs, but those down moments stick with me. They never leave. They don’t even become memories…they stay in real time in my mind, flashing back in and repeating themselves all over again.

I have two happy and living children yet my heart still grieves in such an inexplicable way.

This week I have been talking to Malachi a lot about Jesus. We lay in bed at night while Levi is asleep in the crib next to us and whisper about the ways that God is going to heal him. He listens intently to every word and smiles with excitement. I always make sure to tell him that we don’t know when God is going to heal him, but we believe that he will one day! I never want Malachi to feel that something is “wrong” with him so these conversations can be tricky.

I can’t wait to have a conversation with him one day about all these moments in his life when he couldn’t speak back to me. There is no manual for parenting, especially when parenting a special little boy like him.

Transparency moment here: I have a very hard time visually seeing Malachi’s deformities. I am not disgusted by him or anything like that…it just breaks my heart to see what cerebral palsy does to him, knowing there is nothing I can do to reverse the damage or stop the pain.

When Malachi is fully clothed I can imagine things where they should be, but when I go to change him or give him a shower the reality of his disfigurement can’t be hidden. His body is a road map of scars and devices, all of them needed to preserve his quality of life. Seeing them brings about waves of hopelessness. But these moments have challenged my faith recently in some big ways.

When I see Malachi’s tiny, atrophied legs the devil is quick to remind me that there is no way that a child like him could ever support weight on them- even if his brain is healed and he can suddenly walk. But this week as I fought through those hopeless feelings God brought the story of the lame man from Acts 3 to mind.

Peter and John were headed to the temple to pray and they came across a man who had been lame since birth. I always find it interesting when the Bible includes these extra little nuggets like “since birth”. This man was likely very much like my sweet Malachi, his ankles as thin as the bones inside of them.

In verse 7 we read “Taking him by the right hand, he helped him up, and instantly the man’s feet and ankles became strong. 8 He jumped to his feet and began to walk. Then he went with them into the temple courts, walking and jumping, and praising God.”

Did you catch that extra nugget in verse 7? It doesn’t just say that he jumped to his feet, but it makes a point to mention that his feet and ankles became strong.

It points out the physically impossible so we won’t glaze over it. Prior to having Malachi I never understood the significance of this miracle. God changed the anatomy of that man.

So why do I keep doubting that God will do the same thing in my sweet Malachi?

A few verses later Peter is using the miracle to tell the crowd about Christ. He says:

“16 By faith in the name of Jesus, this man whom you see and know was made strong. It is Jesus’ name and the faith that comes through him that has completely healed him, as you can all see.”

Faith takes a level of endurance that I could not achieve without God’s strength. “My grace is sufficient for you, for my power is made perfect in weakness.”

So instead of looking at Malachi’s weak deformed hips, dislocated knees, tiny ankles, and outwardly turning feet and seeing hopelessness I will choose to see hope. I will choose to hear “not yet” and have faith that Malachi’s day of healing is closer than it was yesterday.

Today I choose hope. And Malachi and I will stay up late tonight whispering about all the things he is going to do when God gives him his new legs. He’ll surely be walking and leaping and praising God.