Levi is officially 10 months old! Praise the Lord! Here are a few photos from our week; it was bath morning, so he was getting a brief break from the tape on his face. 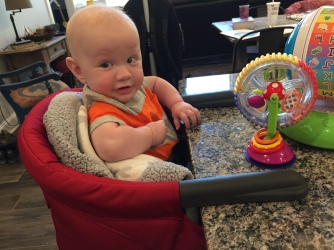 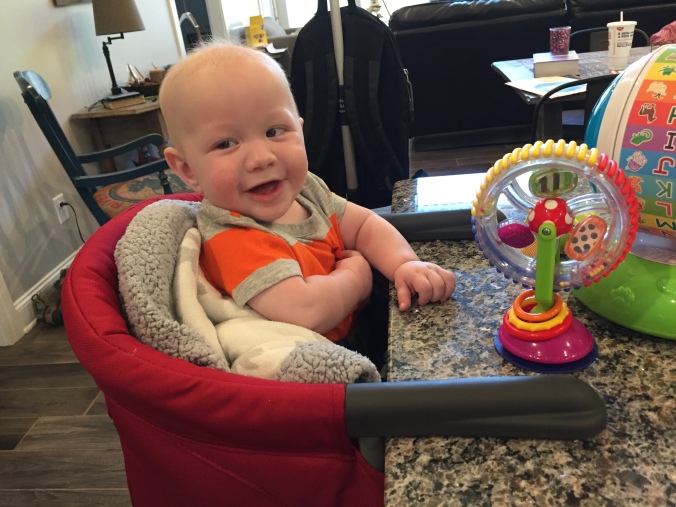 With my second pregnancy I was really hoping to have that wonderful birth experience I didn’t get the first time around, and unfortunately that didn’t quite happen. I am still at a point where thinking back to that day hurts my heart a bit…I just need a little more time to heal. Even reminders like his 10 month birthday tend to sting a little as so many memories get the chance to flood in.

Speaking of NICUs, let me give a special shout out to all of the amazing people that have generously donated to our “heartbreak box”. We have received enough donations to do 110 gift cards ($20 for a baby item and $5 for Starbucks) which exceeds all expectations I had! What a blessing these cards will be to some heartbroken mothers.

Collecting donations is proving to be the easy part. I ordered all the stationary and started writing the cards this week, and that has been way more work than I anticipated. God is telling me that each one needs to be handwritten- believe me, I have tried to bargain with Him on that one, as each one takes me 8 minutes to write. Little known fact: I have a broken wrist from an untreated break as a child. My hand has shifted significantly over the years and it can be very painful for me to write long periods of time. 8 minutes x 110 cards = nearly 15 hours of writing. Yikes!

But I realized last night that there is an easy solution! I need to let other people help. The control freak in me is shouting NOOOOOO but I think there is a lesson for me in all this about sharing blessing opportunities with others, and admitting when something is too much for me to handle alone.  I have had some wonderful church friends volunteer to write some for me, so between all of us we hope to have the cards delivered to the NICU by the end of the month. I have given them each a copy of the note that I want to put in them, complete with encouragement and scriptures. Will you all join me in praying that God uses these in just the right way and that through them these moms will find hope?

Malachi attended school every single day this week (11a-2p) so mommy and Levi had some fun adventures together (shhhh don’t tell Malachi; he thinks we sit at home waiting bored and anxiously to come pick him back up). Levi and I went to therapy, lunch, and Target on Monday,  the grocery store on Tuesday, and a friend’s house for a playdate on Wednesday. He is officially a momma’s boy and loves the one on one time. Yet somehow he still will only say “daddy”. Figures haha. 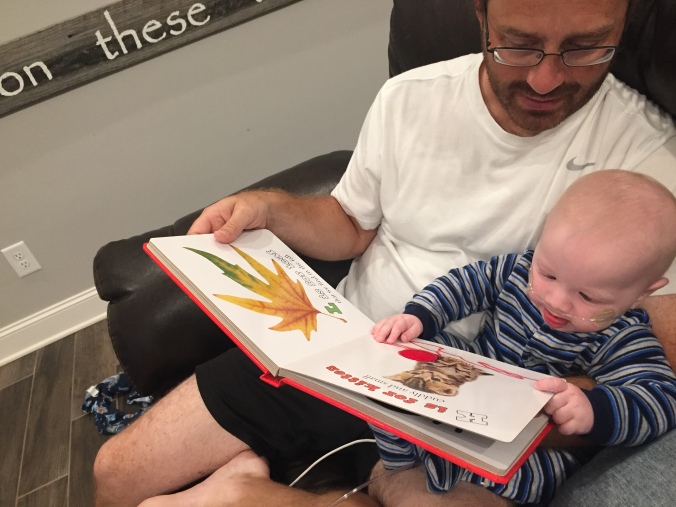 Malachi’s seizures have been back to normal, which for him is 6-8 small ones a day. His large ones have been staying away and we are thrilled. His body temperature is still a little wonky. He ended up running a low temp at school one day and by the time I made it there to pick him up 20 minutes later the temp was gone.

The boys had their feeding therapy sessions on Tuesday and Malachi has been eating like a rock star. He seems intrigued that his new therapist is a man and is very eager to earn some compliments from him. He also has been buying into the idea that he has to teach Levi how to eat like a big boy. Levi is incredibly stubborn and wants nothing to do with food still. Therapy time was non productive, but at home we have had a little more success at getting him to try some new things.

The high school soccer team that we coach had a tournament 30 minutes away. Jake is required to be there as he is on staff at the high school so he left with them at 9:45. Not anticipating all the scheduling conflicts, we had scheduled our youth group to serve at the food bank at 9am that morning. And then Malachi had his soccer team pictures and game at 10am…it is hosted at our church and Jake and I unlock the doors for them each week and help get the building ready.

But by golly, we made it work! I unlocked the church early for the soccer crew and told them we would be late, as the food bank was top priority on the list. We want to make sure we are being a good example to the teens about following through with commitments and doing the right thing even when there are more fun options available. Luckily the kids worked incredibly hard and filled all the bags by 10:30 and off to soccer we went.

Here is a super sweet video for you of Levi:

And in true mommy fashion, I feel absolutely guilty that I don’t have any Malachi pictures on the blog this week. I have some from his soccer game but they have his teammates in them as well and want to respect those children and their parents by not posting without their permission. BUT Malachi was in the local newspaper this week, so I snapped a quick picture of the article:

And comically enough, when I went to cut it out to hang on the fridge I noticed that Jake and I were on the article directly on the back of Malachi’s! What are the odds of that!? 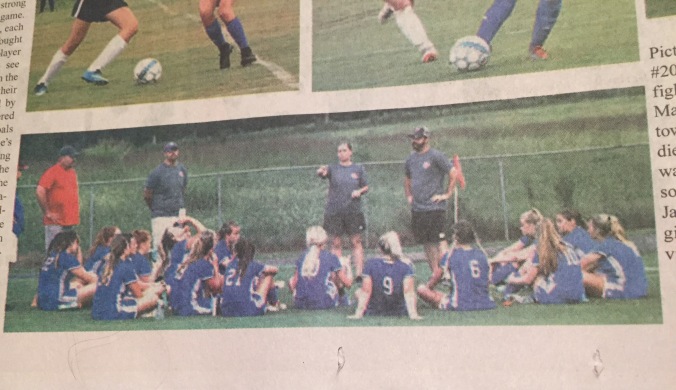 One word that has been coming to my mind lately is HOPE. So much of my life hinges on those four letters. I know I post this scripture often, but it plays in my mind every single day. I have even included it in my NICU heartbreak cards.

Isaiah 40:31  “but those who hope in the LORD will renew their strength. They will soar on wings like eagles; they will run and not grow weary, they will walk and not be faint.”

One of the things I have yet to lose in our journey is hope. But there are so many moments where it flickers and fades.

Last night I laid in bed holding hands with my sweet Malachi. I had tried to lay him in his bed three times, and each time he cried. At midnight I finally gave up the battle and put him in bed with me…nose to nose, his favorite way to sleep. He reached out and grabbed my hand, smiling at his success. His joy made me smile and as it randomly does, my heart started to break for him. He struggles so much in his world. The simple achievement of finding my hand and grabbing it brought him so much joy- my heart breaks that such a simple task is such a monumental thing for him.

I looked at his sweet little smiling face and prayed to God yet again for his healing. I moved my hand over each part of his broken body, praying out loud as we went. He knows what prayer is and quietly yet excitingly anticipated each new part of the prayer as I moved from his brain to his eyes to his tummy to his feet. My hope is still rooted firmly in the Lord, and I expect God to heal him and make him whole.

But when you hope and pray day after day and never seen that prayer answered it is easy to let that hope fade. And I often can feel that fading as it is happening within me. I start to doubt. I start to mourn over the permanency of his condition instead of believing that he will be healed.

But in 2 Corinthians 4:16  we read “So we do not lose heart. Though our outer self is wasting away, our inner self is being renewed day by day.”

And what truth there is in that statement for both Malachi and myself. God is so good, and each and every day he renews our inner self. He fills us back up with strength…for Malachi that means he can find mommy’s hand and hold it as he drifts off to sleep. For me that means he gives me enough strength to start fresh the next day with a healthy level of hope again.

As I prayed over Malachi’s brokenness last night I got sidetracked by the quietness in the room. Yes, it seems odd that silence can be distracting, as usually it is the opposite way around. But Levi is incredibly noisy when he sleeps. I can hear him anywhere on the first floor through closed doors. But here I was just three feet away from him and I could hear him quietly breathing, no stridor or squeak. His monitors were reading 100 on his oxygen saturation telling me he was comfortable and safe.

My heart started beating faster as I thought that my prayers had been answered and that God had finally healed my youngest son. My heart was hoping.

After five minutes of me allowing myself to believe that his healing had come, Levi shifted and his squeaking hit full blast. In my heart I felt that hope fade yet again.

After feeling two heart twisting moments in the course of 10 minutes I started to ask why I do that to myself? Why do I continue to hope just to have those dreams squashed? And why do I do this over and over and over again? Shouldn’t we have accepted this life, and this brokenness by now?

Should I just give up on this trusting God thing?

But then I started to imagine a life without hope. A life without anticipating that tomorrow will be the day my boys are healed. Without that hope, I don’t know that I would have the drive to keep doing this day after day.

There is power in hope. There is a hidden strength and it become a fuel.

Romans 12:12 “Rejoice in hope, be patient in tribulation, be constant in prayer.”

Hope doesn’t always bring us the answers we want. But it changes the outlook of our circumstance. There is something so pleasing to God about a pure faith that continues to believe in the impossible. Oh how much joy it brings him when we place our hope, day after day, in Him and acknowledge that with a single thought He could make both of my children whole again.

But there is a reason He has said “not yet”. And when I choose to hope, it is my way of telling God “I know you can, so when you are ready…”

Maybe this will be the week.