Let the chaos begin! Every summer Jake and I inevitably over-plan a few weeks in a row and things get wild. Our chaos is about to explode and I am secretly looking forward to it, knowing full well schedule changes may include some unscheduled mayhem.

This week Jake and I will be packing up and taking 20 of our youth group members to summer camp in South Carolina! Malachi will be joining us, of course, so I have been making lists and notes that are pasted all over the house making sure I won’t forget anything. Packing for Malachi can get complicated as we have to think through medications, syringes, “worst case scenario” supplies, and enough special food to get us through. A lot of that can’t be packed until the morning of departure, as it is still necessary in our daily routine until then.

We eased into the chaos a bit this week with a few adventures. Malachi impressed us all with his ability to ride on the horse all by himself at therapy! We were walking on either side of him, offering support as needed and he loved the independence. We took over 200 pictures, and had about 5 good ones (oh, the special needs life), so I thought I would post a few of those for you! 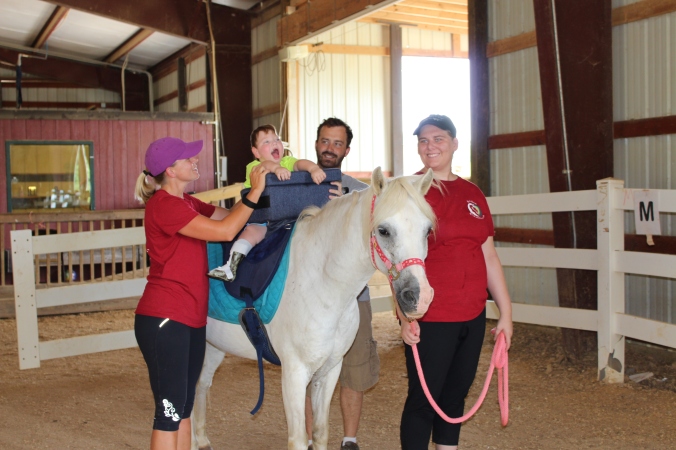 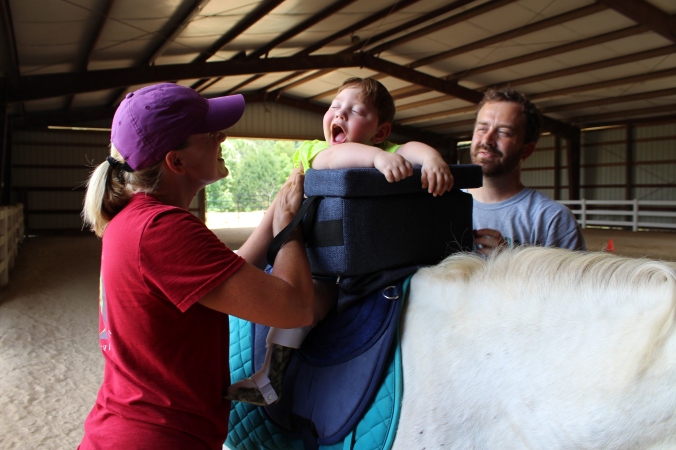 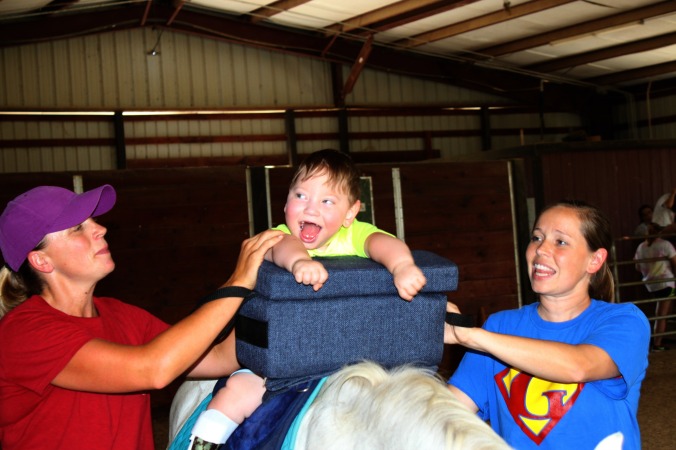 Tuesday we headed to Chattanooga for a visit with Malachi’s DME Provider (Durable Medical Equipment). This is the company that has helped get Malachi’s wheelchair, activity chair, and bath chair. The larger Malachi gets, the harder it is for Jake and I to get him into good positions that will help his body develop like it should. We have been talking about trying to get him a stander which will allow him to bear weight on his legs and knees, stretch out his core while properly aligned, and work on his head control. We found one that we thought would work well for Malachi and our DME was able to find a demo for us to try him in. This is not the exact stander that we are going to try to process through insurance, but it is similar. 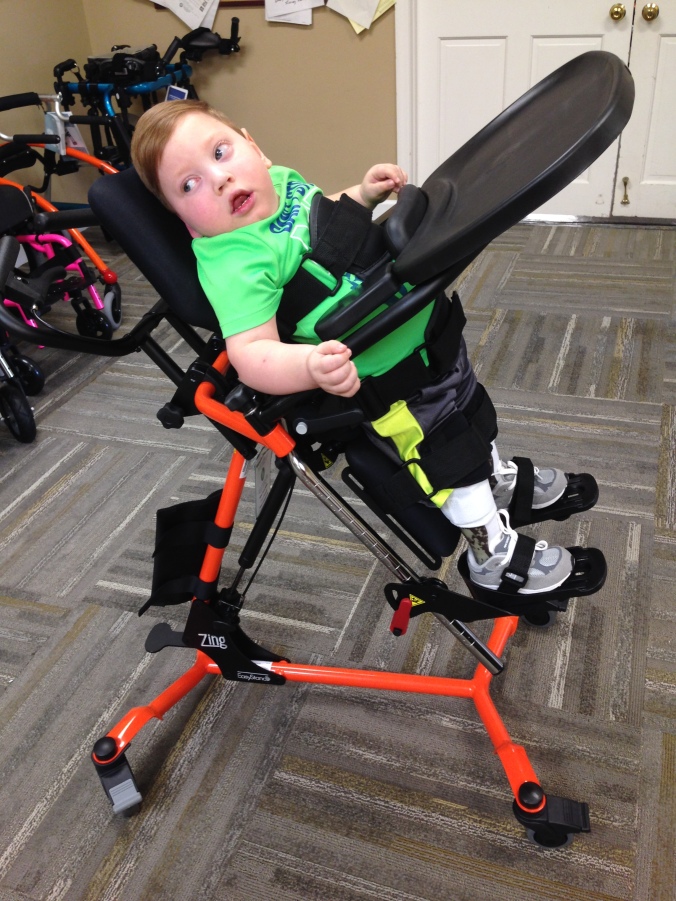 As you can probably tell from the picture, Malachi wasn’t a big fan. After just 5 minutes in it he started crying in pain. His little body isn’t used to being in an upright position and his joints aren’t used to having to work in that manner. But it is really important for him to continue to spend time in a stander to help his body learn its intended functions. Baby steps! Overall we were happy with the device and how easy it was to use.

Speaking of insurance, we have been battling it out via phone all week. Looong story short, Malachi is in a size 7 diaper. They do not sell these in stores, but Pampers does sell them online so we order them each month. When Malachi turned 3 he was eligible to start getting diapers covered through his insurance, but we felt guilty pursuing that route as many other parents we know with kids Malachi’s age are still part time in diapers. If typical families are still providing these for their children, we felt we should as well. Now that his buddies are potty trained we decided it was time to make the phone calls.

I talked with insurance and told them he was in a size 7. While insurance does cover his diapers, they are very limited and particular about the type and brand. We are not brand snobs by any means, but the samples we were sent just aren’t cutting it. Let me attach a picture to help explain. 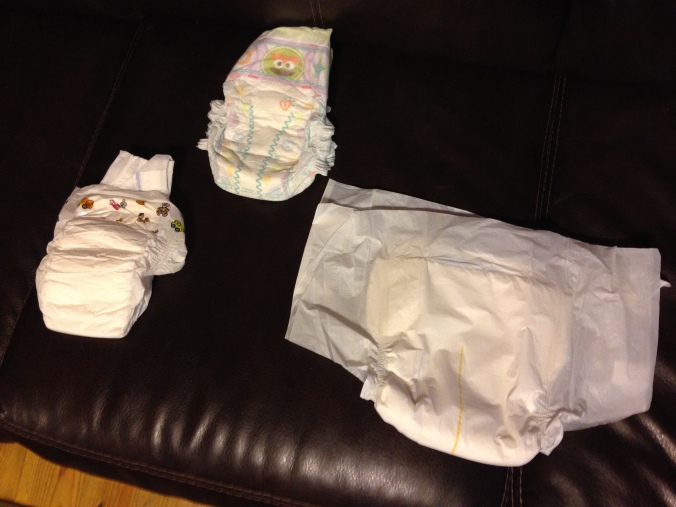 Diaper #1 on the far left is a size 6 that the insurance company sent. Malachi and his big booty don’t quite fit into this one. Diaper #2 in the middle are the current size 7 Pampers we order for Malachi.Diaper #3 on the far right is the “next size up” from Diaper #1. In addition to them being HUGE, they are plastic trash bag type material on the outside and crinkle with every move. We gave them a try, but even with folding, cutting, and wrapping we just can’t even get it close to working.

We called them back to see if their were other options and were told there were not. The only loophole we have found is asking one of his doctors to write a letter explaining that Pampers size 7s are the only ones that will fit Malachi appropriately right now and therefore “medically necessary”, and cross our fingers that insurance agrees. There is a pretty slim chance this will work, but I have pursued that route. The frustrating part is that this process has taken hours on the phone to even coordinate and the odds of it working are against us.

And truthfully when he outgrows his current size the idea of the trash bag diaper makes me so sad. I know it seems silly because it is just a diaper, but having to transition from “baby” items to “special need child” items is hard for me to process emotionally. The warrior mom in me wants to protect Malachi’s dignity as much as possible, and if he must wear diapers the rest of his life, the least I can do is make sure they aren’t noticeably loud and ridiculously uncomfortable.

Malachi also got some pool time in this week. We had a nice overcast day which allowed him to swim without a hat and his flaring anger towards the sun! 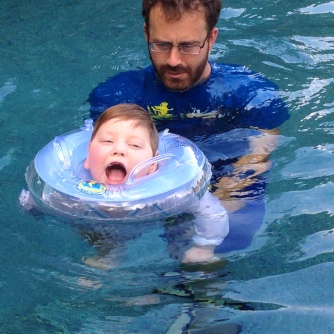 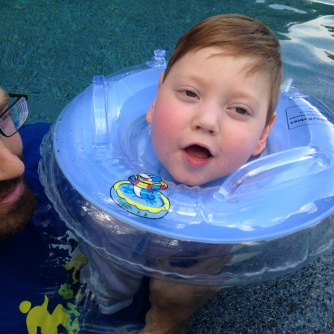 We also went on a big adventure yesterday to Wilderness at the Smokies in Sevierville with Jake’s family. If you aren’t familiar with this place, it is a giant indoor/outdoor waterpark about 2.5 hours from us. They wouldn’t allow Malachi’s neck ring so we were a little limited on where we could take him but we did find an indoor preschool area for him to enjoy for a bit. Our intention was to stay the night, but in true Malachi fashion he woke up at 3:00 (that was his wake up time this week) and when he realized daddy was in the room with him, there was a 0% chance of him going back to sleep. After discussing our options we decided it was best to pack up and head out, spending Malachi’s 2 hour awake chunk in the car rather than sitting in a room.

Our plan backfired a little as Malachi was SO EXCITED to see his dogs. After all, it had been a whole 12 hours since he had seen them last haha. That boy sure does love his dogs, and boy do they love him! I captured a sweet video tonight to show you how tolerant they are with him.

So as we embark on our chaos, we would like to ask you for your prayers! Traveling with Malachi is a challenge in itself, and during youth camp he is solely my responsibility as Jake is busy keeping up with the kids. It was physically challenging for me last year, and he is so much bigger. Pray for physical  strength for me to be able to fully care for him and at the same time help encourage spiritual growth in our campers.

Please also pray for Malachi’s health to remain as he is about to be exposed to a week of germs. We have been very blessed that he has avoided sickness this summer, and our prayer is that his immune system continues to work so well!

Thank you for listening to my worries, woes, and complaints each week! You guys are a collective support group for this momma and I am so grateful to have an outlet of loving people. Thank you for caring about my son.